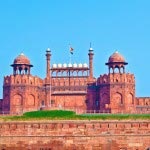 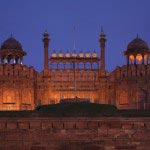 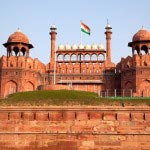 The history of the Red Fort is intertwined with the history of the Mughals, who made it their residence for centuries. In 1638, the Mughal emperor Shah Jahan shifted the Mughal empire’s capital from Agra to Delhi. A new royal palace known as Red Fort (Lal Qila) was constructed. The Red Fort has walls extending up to 2.41 km in length with height varying from 18 meters on the river side to 33 meters on the city side. The Red Fort has two main entrances, the Delhi Gate and the Lahori Gate. The latter faces Chandni Chowk, the city’s most crowded but diverse market.

The Red Fort complex constitutes of the Red Fort and the Salimgarh Fort (built in 1546). The fort houses the Diwan-i-Aam or the Hall of Public Audiences, where the emperor would sit in a marble-paneled alcove studded with gems and hear the concerns of the common people. The Diwan-i-Khas or the Hall of Private Audience was a place where the private audiences were granted. This hall was made of marble and its center was embellished with the Peacock Throne, which was studded with rubies and gems. Today, although the Diwan-i-Khas is only a pale shadow of its original glory, yet the verse of Amir Khusro, “If there is Paradise on the face of earth, it is here, it is here, it is here” reminds us of its former glory. The Rang Mahal or the ‘Palace of Colors’ holds a spectacular lotus-shaped fountain made out of a single piece of marble. It housed the emperor’s wives and mistresses.

The Naubat or Naqqar-Khana (‘Drum-house’) in the Red Fort is a place where music was played on special occasions. It was used as the entrance to the Diwan-i-’Am. This was also the place where visitors used to dismount from their elephants. Hence, it was known as ‘Hathipol’. Presently, the upper storey of the Naqqar-Khana houses the Indian War Memorial Museum.

The other attractions enclosed within this monument are the hammams or the Royal Baths, the Shahi Burj – which used to be Shah Jahan’s private working area – and the Moti Masjid or the Pearl Mosque. Even today, the Red Fort is an eloquent reminder of the glory of the Mughal Empire.

As the parking lot is near Jama Masjid, located on the opposite side of the Red Fort, car parking is a big hassle. You need to take a long walk from the parking to reach the gate of the fort. Moreover, traffic snarl on the connecting roads make it difficult for the tourists to cross the roads. It is advisable to travel by a taxi.

The Meena bazaar (market) at the Chatta Chowk has shops that sell various handicrafts including jewelry, paintings, Kurtis, etc.

The India Tourism Development Corporation Limited conducts a sound and light show in the evening from February through April to recreate the historical era. The timings for show in Hindi are from 7:00 p.m. to 8:00 p.m., whereas show in English is conducted from 8:30 p.m. to 9:30 p.m. On weekdays, the ticket for adults cost INR 60 per person, and INR 20 for children (3 to 12 years). On weekends and national holidays the ticket for adults cost INR 80 and INR 30 for children. Tickets can be booked online at theashokgroup.com. 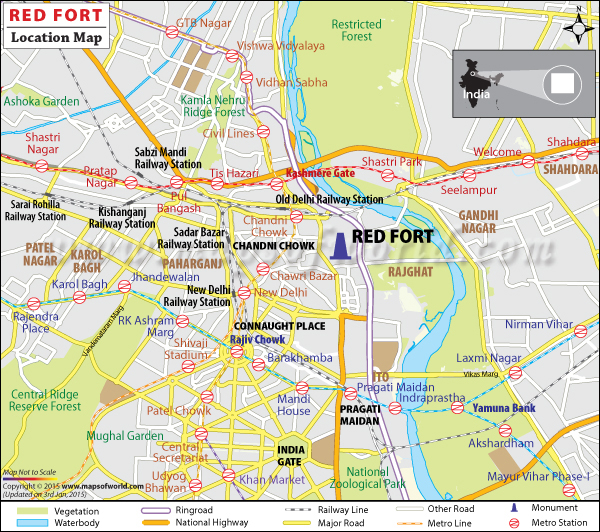 Where is Red Fort Located?

The Red Fort is located on Netaji Subhash Marg, Delhi, India. It can be easily reached via metro transit system. The nearest metro station is Chandni Chowk. If you are coming to Delhi by train, then Old Delhi Railway Station is the closest railway station from the Red Fort located just 1 km away. It is also close to the ISBT (Inter State Bus Terminal). Thus the place is well connected by buses. The Indira Gandhi International Airport is located at a distance of 26 km from the Fort.

The best time to visit Red Fort is from October through March when the weather remains pleasant.

Entry fee for foreigners is INR 250 and Indians is INR 10.

Why did the Red Fort become a UNESCO World Heritage Site?

The Red Fort in Delhi became a World Heritage Site for its excellent site planning, architecture, and historical importance.

Why flag is hoisted at the Red Fort?

On August 15, 1947, India got freed from the British rule. India’s National Flag was hoisted for the first time on this day at the Red Fort, as a symbol of victory. Thus, every year since then, the flag hoisting ceremony is observed on August 15.

How is the Red Fort affected by air pollution?

The color of the monument is fading due to air pollution. The buildings inside the Red Fort that have been built using marble, such as the Diwan e Khas, Rang Mahal, etc. are turning yellowish and black due to the effects of air pollution. The Archaeological Survey of India has performed restorations on the Red Fort and is working upon the conservation of this historical site.

What is the difference between the Red Fort in Delhi and Agra?

The Red Fort in Delhi is more well-planned than the one in Agra. Shah Jahan’s experience in Agra helped him in building this wonderful fort.