The political map of India illustrates the surrounding countries with international borders, 28 states, and 8 union territories boundaries with their capitals and the national capital. 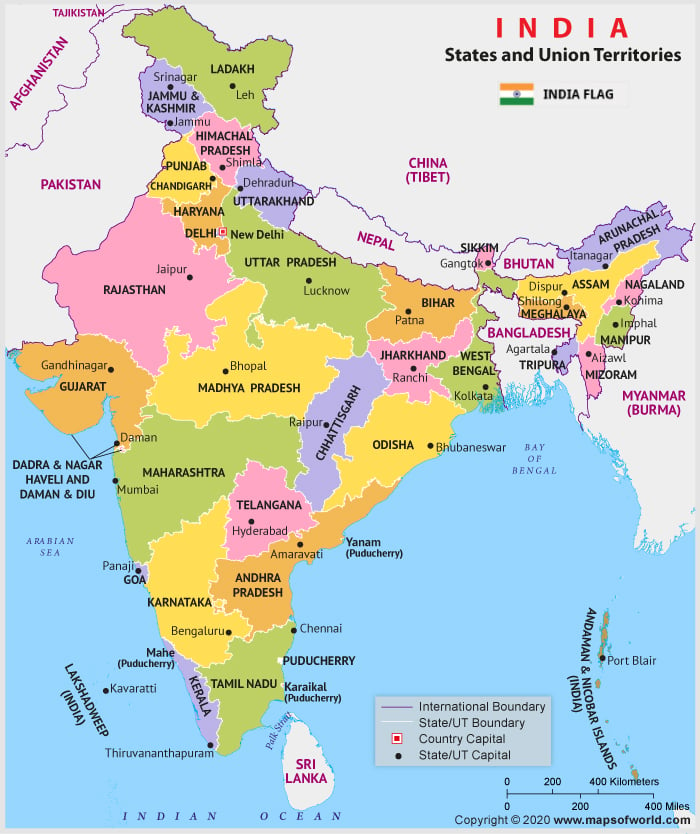 India’s political map shows in detail the states, and capital cities as well as the bordering countries of India. India is located in Southern Asia with the Bay of Bengal on its eastern side and the Arabian Sea on its western side. It is located on the geographical coordinates of 20º North and 77º East latitude and longitude, respectively. The country covers an area of about 1.269 million sq. mi (3,287,590 sq. km) Kanchenjunga, located at an elevation of 28,209 feet (8,598 meters ) is the highest point in India. This country has got a long coastline of 4,671 mi (7,517 km).

India is surrounded by Afghanistan and Pakistan on the north-western side, China, Nepal, and Tibet on the north-eastern side, Bangladesh and Myanmar on the eastern side, and Sri Lanka on the southern side. The bordering countries are clearly shown on the map.

The capital of India is New Delhi, which is located on the geographical coordinates of 28° 36′ North latitude and 77° 12′ East longitude. It is situated at an elevation of 689 ft (210 meters) above sea level. There are two airports located within the city; for International flights, there is IGI Airport, and adjacent to it is another one for domestic flights.

The latitude and Longitude of Delhi are /lat_long/new-delhi.html

Connaught Place, Karol Bagh, Vasant Kunj, Dwarka, and Paharganj are some of the city areas located in the Indian capital.

The Indian States and Union Territories

There are a total of 28 states and 8 Union Territories in India. The states of India along with their capital cities are as follows:

The Union Territories of India are:

The states are highlighted on the political map of India in different colors. The state capitals are marked with a red circle on the Indian map. Andaman and Nicobar Islands lie on the eastern side and Lakshadweep Island lies on the western side of India on the Bay of Bengal and the Arabian Sea respectively.

The Indian Ocean lies in the southern part of India. The water bodies are shown on the printable map of India in blue color. Each of the states on the map has different colors to make it convenient for the user. The national and the international boundary are represented by black-colored dotted lines.