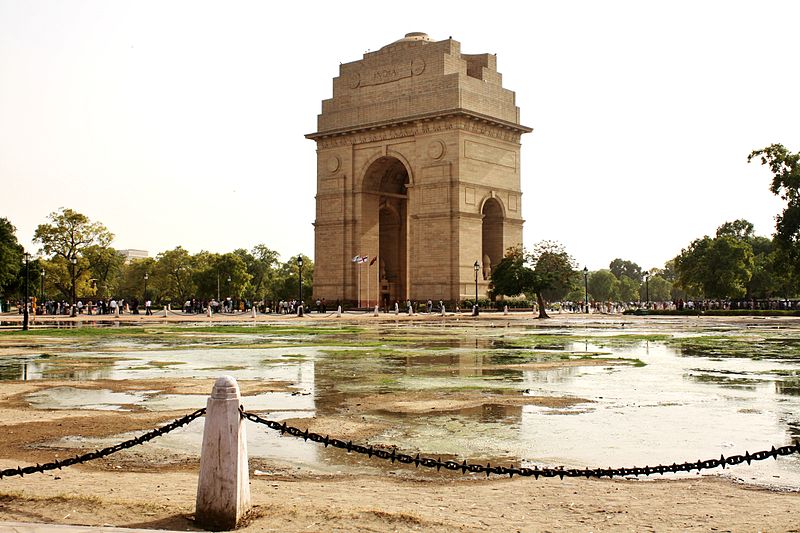 A magnificent archway standing at the crossroads of Rajpath- the India Gate is a war memorial dedicated to the 70000 Indian soldiers who lost their lives in the First World War fighting on behalf of the allied forces. The erstwhile name of India gate is All India War Memorial.

The India Gate was designed by Sir Edwin Lutyens, the English architect famous for planning a large part of New Delhi. His Royal Highness, the Duke of Connaught laid the foundation stone. Ten years later, Lord Irwin, the then Viceroy of India dedicated the India Gate to the nation. Lutyen was famous for combining classical architecture with traditional Indian elements. A remarkable instance of the classic arch of Lutyen’s Delhi Order, the India Gate is a key symbol of New Delhi- the eighth city of Delhi. It bears a strong resemblance to the Arc de Triomphe in France. Though essentially a war memorial, the India Gate also borrows from the Mughal style of creating gateways.

The India Gate stands on a base of red Bharatpur stone. The edifice itself is made of red sandstone and granite. An inverted interior dome appears on two square shaped trunks. Imperial signs are inscribed on the cornice. On both the sides of the arch is inscribed the word the word INDIA. The start and end dates of WWI appear on either side of the word. The columns are inscribed with the names of 13516 British and Indian soldiers who had died in the Northwestern Frontier in the Afghan war.
The height of India Gate is 42 meters and there is a staircase from the base to the roof.

The Amar Jawan Jyoti translates to the ‘Immortal Flame of a Soldier’. It is a black marble cenotaph on which the words Amar Jawan are written in Hindi. An inverted rifle stands on it, mounted by a soldier’s helmet. Four torches burn continuously at its four corners. This memorial was built after the 1971 India-Pakistan war, to commemorate the Indian soldiers who had laid down their lives in the war.
The Amar Jawan Jyoti was inaugurated on January 26, 1072 by the then Prime Minister of Delhi, Mrs Indira Gandhi. Since then it has been religiously guarded by soldiers from the army, the airforce as well as the navy. On 16 December, the anniversary of Indian victory in the 1971 war, and on 26 January, the Republic Day of India- the Prime Minster of India, the President and other dignitaries pay their respects at the shrine.

About 150 meters off the east side of India Gate, an empty canopy can be seen. A fifty foot tall statue of King George V in his coronation robes, complete with a crown, a globus cruciger and a scepter was installed under this canopy. This canopy too was designed by Sir Edward Lutyen in 1932. However, after India gained independence the statue was sent to Coronation Park to join all other statues that are relics of the British Imperialist Rule. Many consider the empty canopy suggestive of India’s triumphant freedom struggle that succeeded in rooting out Britishers. Many, however insist that the statue of an Indian leader, preferably Mahatma Gandhi, should occupy the position of prestige.

The India Gate is strategically located on the eastern end of Rajpath. An unhindered view of the Gate can be had from the Rashtrapati Bhawan (Presidential Residence).

The grounds near India gate see a lot of picnickers, especially families with children. Delhi, being a city where the rising population makes owning a sunlit courtyard an impossible dream, public places such as the park near India gate are an inexpensive way to spend some time enjoying the morning sun. This is especially true of winters. India Gate is a popular evening destination during summers. With several hawkers selling their wares to little children and vendors selling ice-creams, corn on the cob, and warm tea- evening brings on a festive mood at the India Gate.

The India Gate plays an important role in the Republic Day Parade that is held in the capital on 26 January every year. The parade commences only after the Prime Minister has paid his respects to martyr at the Amar Jawan Jyoti at the India Gate. The colorful parade showcasing the best of civil and military life, then starts from the Rashtrapati Bhawan and passes along the India Gate. 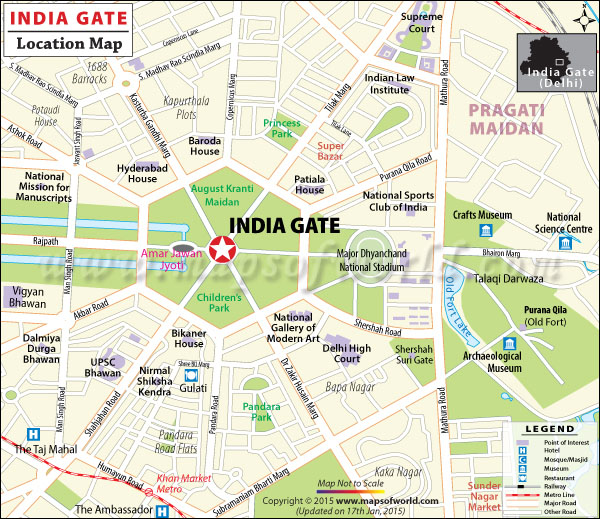 Where is India Gate?

The nearest international airport to India Gate is the Indira Gandhi International Airport.
A car will take you 33 minutes via Sardar Patel Marg.

From New Delhi railway Station a car will take you to India Gate in 12 minutes via Connaught Circus.

India Gate can be visited year round. During the summer months of May to September, India Gate and its nearby park is a favorite destination for evening strolls. Winter months of December to January are best to soak the daytime sun. During the shoulder months of February to April and October to November, temperatures are temperate and you can visit India Gate anytime during the day or night.

India Gate is absolutely free to visit. Of course, you need to pay for parking space if you decide to arrive in your own vehicle.

India Gate remains open to its visitors throughout the day.

What are the places to visit near India Gate?