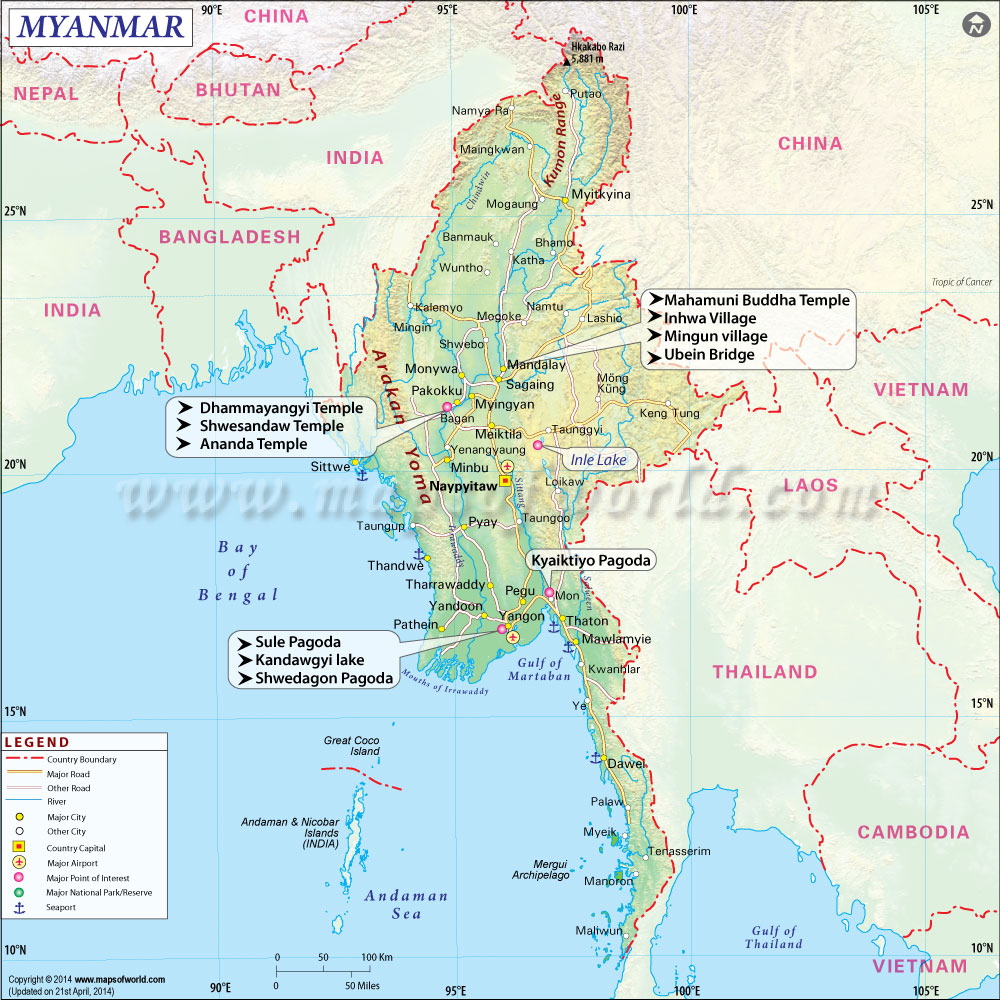 The Republic of the Union of Myanmar, previously known as Burma, is located in southeast Asia. It borders China to the north and northeast, Laos and Thailand to the east and southeast, India and Bangladesh to the west, and the Bay of Bengal and the Andaman Sea to the south.

Around 300 BC, the region of southern Burma already had a rich civilization called the Mon, whose people lived on the banks of the Salween and Sittaung Rivers. In 100 BC, the Pyu people settled in northern Burma, building city states from the 1st century BC to the 9th century AD. The next ethnic group to arrive in the region were the Bamar or the Burman people who originated from China and Tibet. Today, about 2/3 of the country’s population are of Burman origin.

From the 11th to 13th centuries, the region was unified under the Pagan dynasty, followed by the rule of the Toungoo dynasty in the 16th century, and the Konbaung in the 18th century. It was during the Konbaung rule that Mandalay was established as the capital, becoming the last capital city of the Burmese kings.

In the early 1800’s, Britain started to invade the region, and in 1886, Burma eventually became a province of British India.

Rebellions and national uprising against the British rule came into national consciousness when a student strike occurred at the Rangon University in 1920. In the 1930’s, a group of poor farmers created a new militant group called Dohbama Asiayone, where Aung San became President just before the Second World War. In 1947, Aung San became the Deputy Chairman of the Executive Council of Burma, which was the transitional government from British rule to Burmese independence, but was assassinated in July of that year.

Burma became an independent republic on January 4, 1948, but by 1962, a successful coup d’etat brought the country under military rule. Burma’s name was then changed to Myanmar in 1989 when a new military government took over. The military junta was dissolved in 2011, creating the current democratic republic.

Myanmar is located in Southeast Asia. It is the second largest country in the region, and borders China to the north and northeast, Laos and Thailand to the east and southeast, India and Bangladesh to the west, and the Bay of Bengal and the Andaman Sea to the south.

Myanmar has every kind of landscape except for the desert – the northern region of the country has frozen alpine mountains while the south has tropical jungles.

Myanmar is a unitary presidential republic. The President is Head of State and elected in office through general elections. Legislative power is exercised by the bicameral legislative called Assembly of the Union. The Upper House consisting of 224 members are the House of Nationalities, while the Lower House of 440 members are the House of Representatives. A portion of the members of the Assembly are appointed by the military while the rest take office through elections.

Because Myanmar was closed off to tourists for much of its modern history, tourism only began to rise when the military handed over the government to the people.

Yangon, which was the former capital, is the most visited city in the country. Known for its colonial architecture and historic monuments, Yangon boasts of being home to the Shwedagon – the most honored pagoda in Southeast Asia. Said to have been constructed during the time of the Buddha, the impressive 326-feet structure is dated at about 2,500 years old.

Bagan is another Myanmar city whose religious monuments and ancient attractions are popular tourist sites. There are over 2000 temples, stupas, and pagodas in this city, with the most popular ones the Ananda Temple built in 1091, and the Shwe Sandaw Temple where both locals and tourists gather to watch the sun set at the Bay of Bengal.

Mandalay, another former capital, is the geographic center of Myanmar. It is the economic and cultural center of the country, known as the home of more than half of the country’s monks, and for the Royal Palace walled city. It is also know for being a cycling city where most of its residents prefer to get around in bicycles rather than motorized vehicles.

Myanmar also boasts of beautiful beaches. The Ngwe Saung Beach is one of the longest in Southeast Asia, which has 9 miles of sand. The Ngapali Beach on the Bay of Bengal is an unspoiled 3-km beach with crystal waters and soft white sand that’s become a favorite of tourists coming from metropolitan cities.

Myanmar’s educations system is similar to that of the United Kingdom’s. English is taught as a second language from kindergarten, and schooling is compulsory but only until the end of elementary, where children are at the age of 9, compared to the age of 16 in most countries.

Adult literacy rate in the country is at 89.7%, and about 1.2% of the government’s annual budget is dedicated to education funding.