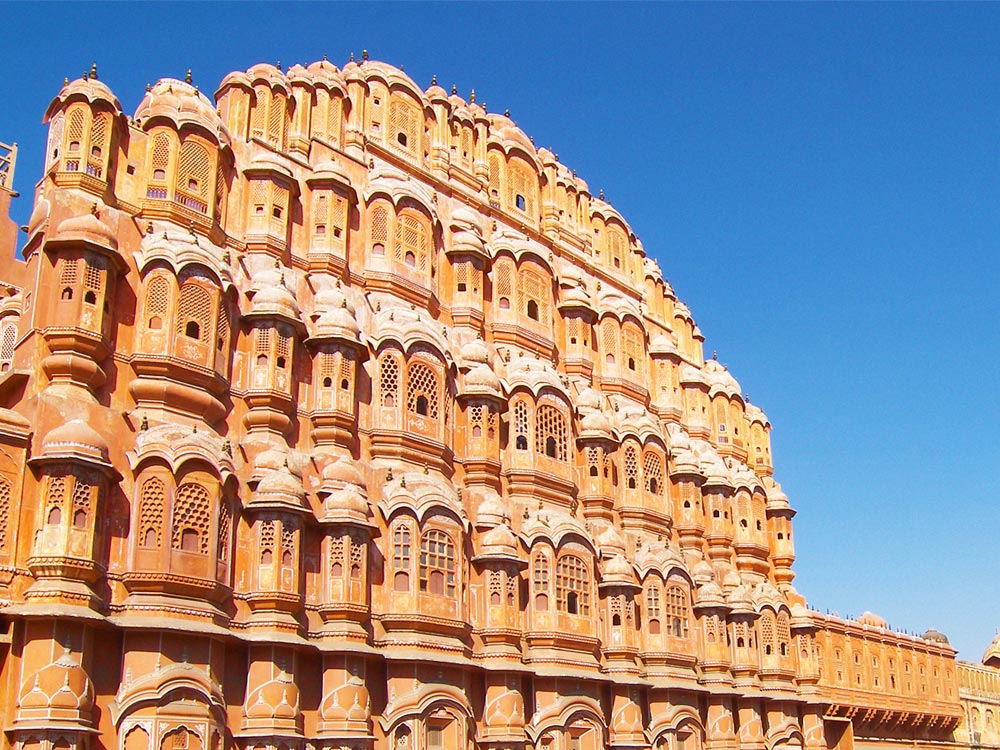 The Hawa Mahal Stands tall as an Icon of the Pink City of India, Jaipur

Hawa Mahal is the most awe-inspiring sight in the city of Jaipur. It is also known as ‘Palace of Winds‘ because of its windows that allow the wind to flow in keeping it cool. There are 953 stone-carved screens or windows in the palace.

In earlier times, the royal ladies were not allowed to give public appearances. The palace was constructed to let the ladies of the court view the daily activities in the streets and the areas in the vicinity, without being noticed by anyone. The palace is an extended part of a huge complex. The stone-carved screens, small casements and arched roofs are some of the features of this popular tourist spot. The monument also has delicately modeled hanging cornices. Just like the other monuments of Jaipur, the palace is also constructed in pink and red colored stone.

The palace stands at a height of 15 meters. The frontal of the Hawa Mahal appears as if it is just a frame and there is nothing behind it. The top three storeys comprise of just one room each. The base of the palace has two courtyards. The front of the palace is embellished with semi-octagonal bays, finials and domes, and intricately carved grills made of sandstone.

Some people say that the shape of this monument resembles the crown of Lord Krishna. The palace looks appealing just from the outside. The interior section is deprived of architectural ornamentation. The chambers are very simple and have pillars to reach the upper part of the monument. Interestingly, the entry to the palace is from the rear side and not from the front. The palace also has an archaeological museum. For more information refer to this extensive Travelogue on Jaipur

Where is Hawa Mahal?

Hawa Mahal is located in the heart of Jaipur, on a big road intersection known as Badi Chaupad. If you are coming from abroad, you can fly to Jaipur International Airport. Alternatively you can fly to the Indira Gandhi International Airport, New Delhi. From here either take a taxi, or reach Jaipur via domestic flight to Sanganer Airport, Jaipur. If you wish to visit Jaipur using rail transport, then from Jaipur railway station, you will have to either take a bus or taxi to reach the monument.

As summers are very hot in Jaipur, a trip to the Hawa Mahal must be made in spring, fall or the winter season.

The entry fee for the Hawa Mahal is Rs. 10 per Indian and Rs. 50 per foreign tourist.