Wars between India and Pakistan - Answers 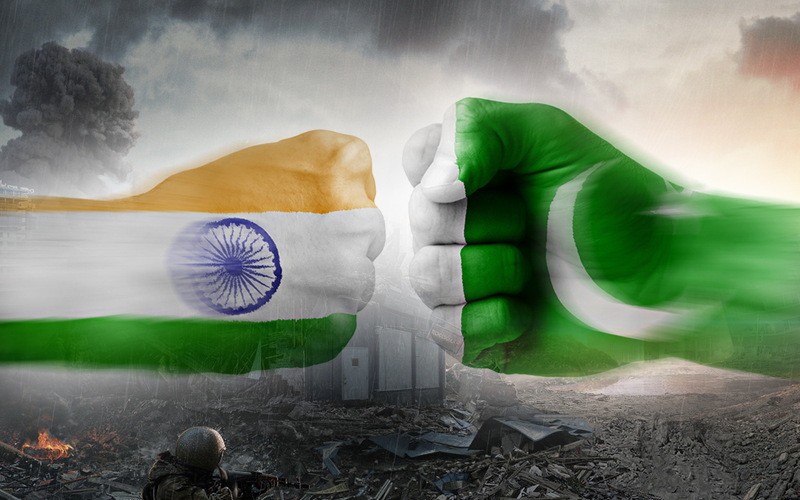 India and Pakistan are not currently at war.

India and Pakistan are neighboring countries in South Asia. In 1947, even as India’s struggle against colonial rule was drawing to an end, Muslim leaders of modern day Pakistan mounted a demand for an independent country. The partition of 1947 and ensuing communal violence left deep scars that translated into three full-scale wars, an undeclared war, and continued conflicts along the border of the two countries.

The major issue of contention between the two countries is Kashmir. Right after partition, the Maharaja of the princely state of Jammu and Kashmir signed an Instrument of Accession fearing occupation by Pakistan. Pakistan holds the accession unconstitutional.

Wars between India and Pakistan –

The conflict of 1947 broke out over Kashmir. Pakistan advanced to occupy Jammu and Kashmir which had initially chosen to remain independent. Maharaja Hari Singh Dogra, the Hindu ruler, acceded to India. War broke out between India and Pakistan and the latter occupied about a third of Kashmir. UN intervention led to the creation of the Line of Control (LOC) which marks the territory occupied by each side.

The 17-day India-Pakistan War of 1965 came as the culmination of various insurgency operations (Operation Gibraltar) carried out by Pakistan as an attempt to infiltrate India administered Jammu and Kashmir. India responded with a full-scale military attack. Thousands lost their lives on both sides. While the war ended in a ceasefire with an official verdict deeming it inconclusive, it is considered a strategic defeat for Pakistan.

In 1971, Bangladesh (East Pakistan) sought India’s help in gaining independence and even as India was contemplating its role in the struggle, Pakistan launched preemptive strikes across many eastern air bases in India. India, in turn declared war and fought Pakistan on both the eastern and western fronts. The war ended in a resounding victory for India and in the formation of Bangladesh as a sovereign state.

Pakistani troops infiltrated the LOC and took control of many strategic military posts on the Indian side. Pakistan’s Army was initially reluctant to admit its involvement. The Indian Army, supported by the Indian Air Force managed to regain almost all of the lost territory. International pressure forced Pakistan to withdraw from the remaining positions.

The two countries have been embroiled in numerous border skirmishes and India has blamed Pakistan-sponsored terrorists for many attacks on its military and civilian installations (including recent attacks on Pathankot and Uri).

Both countries are declared nuclear powers and neither have signed the NTP. The cost of a full-scale war is one that neither country can afford. It is the endeavor of the international community to get both nations to the table and resolve the ongoing differences without need for military intervention.