Known as the "Tiranga", the national flag of India was adopted on July 22, 1947. The National Flag of India has three equal horizontal stripes. Know about India flag colors and their meaning. 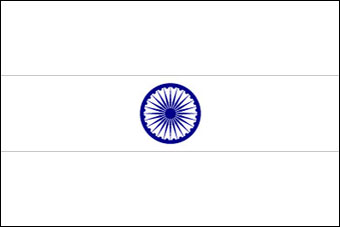 Download Picture of Blank India Flag For Kids to Color

Designed by a freedom fighter by name of Pingali Venkayya, the national flag of India is a horizontal tricolor featuring three equal horizontal bands of saffron (top), white (middle), and green (bottom). The middle stripe of the flag features the national emblem, that is, a blue spinning wheel, the “Ashoka Chakra “.

The Ashoka Chakra has twenty-four spokes and represents the eternal wheel of progress and righteousness. The wheel is found in Ashoka’s Lion Capital from Sarnath.

The National Flag of India was adopted at the meeting of the Constituent Assembly on July 22, 1947. The constitution of India lays down strict rules and guidelines that need to be followed when using or displaying the flag. The various instructions on the use of the flag are outlined in the Flag Code of India.

The Indian National Flag is a matter of pride for its citizens. The late Prime Minister Pandit Jawahar Lal Nehru called the flag a symbol of freedom for the Indians. The colors used in the flag represent the unity and the democratic nature of the country and celebrate secularism. The Indian National Flag is also known as the Tiranga or the Tricolor.