which country has bagged the highest number of miss world pageants? 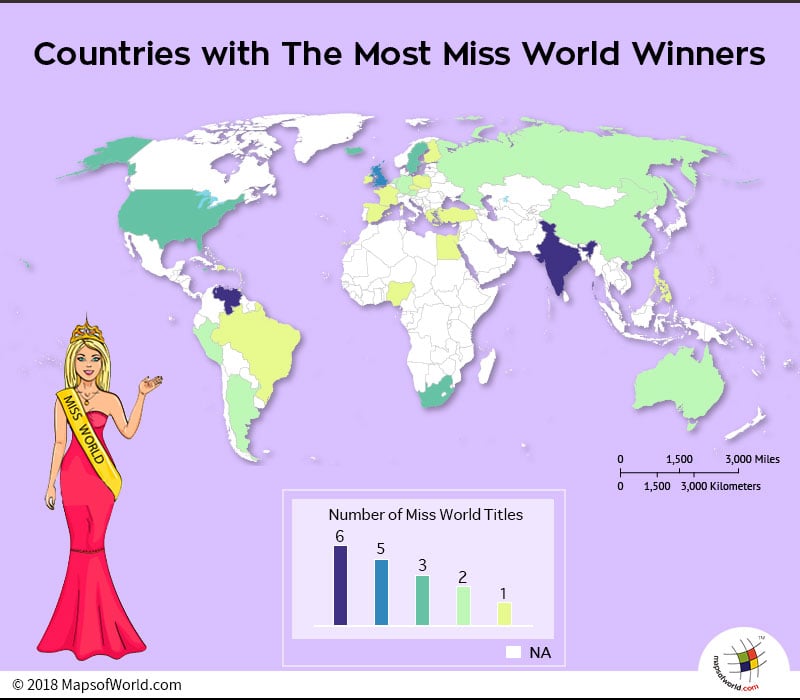 One of the oldest international beauty pageant – the Miss World Contest, is a mega event which grabs the attention of the world media. Millions of people around the world tune in to watch one of the lucky young woman make it to the coveted crown. The cheerful smile on the beautiful winner’s face and the happy tears, trap the hearts of many!

The origin of the contest dates to 1951, when a British TV host, Eric Morley, organized the Festive Bikini Contest, as a part of the Festival of Britain. Kiki Håkansson from Sweden won the contest, and she has been the only winner who wore a bikini when being crowned. The event drew plenty attention and was coined as “Miss World” by the media. Subsequently, Morley made the pageant an annual affair.
When Eric Morley died in the year 2000, his wife Julia Morley became the chairwoman of the organization. Today, it remains one of the eagerly-awaited events, franchised in more than hundred countries.

Currently, Manushi Chhillar of India holds the title of “Miss World”. She was crowned on November 18, 2017. In fact, India, along with Venezuela, has been the most successful country when it comes to the number of titles won by its women citizens. Both the nations have bagged the Miss World title six times.

Reita Faria was the first Indian woman to wear the crown in the year 1966, which was followed by a long lull. The second time Indian won, was when Aishwarya Rai was crowned as “Miss World” in the year 1994. She was also crowned as “Most Successful Miss World” in the 2014 ceremony. On the other hand, Venezuela had its first victory in 1955, when Susana Duijm was crowned as Miss World. The second time, it was in 1984 that Astrid Carolina Herrera of Venezuela, bagged the position.

The United Kingdom has won the third most number of titles in the beauty pageant, with the total number of titleholders being five. Rosemarie Frankland was the first woman of UK to have won in year 1961.

The organization has helped raise millions of US dollars for charity purposes, including aid of underprivileged and disabled children.

Here we have listed the winning countries of Miss World: