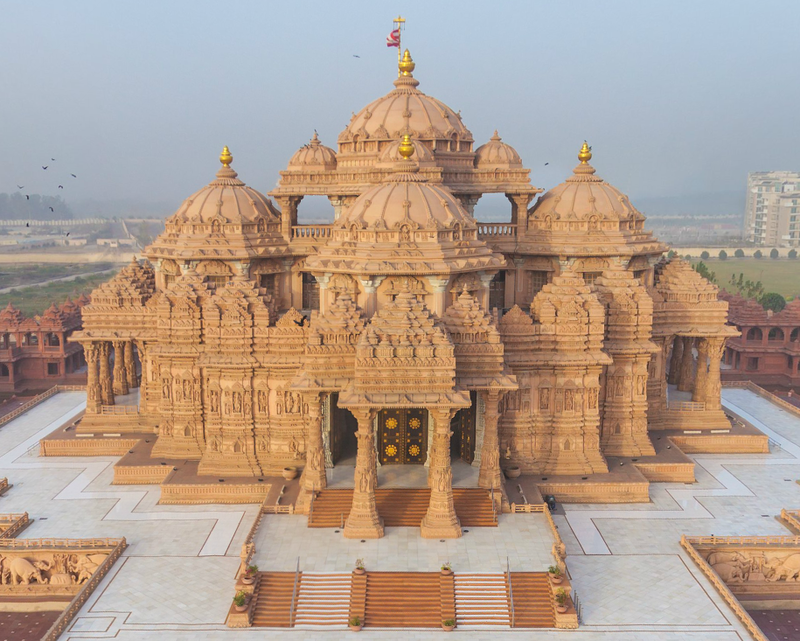 ‘Akshardham’ means the abode of the divine God

In a city whose skyline is dominated by Mughal monuments and colonial architecture, the Akshardham Temple adds a new dimension. This magnificent Hindu temple is a colossal structure covering an area of 86, 342 sq. ft. Built within a span of five years, this relatively young temple on the banks of the Yamuna river is already an icon of Delhi. Akshardham, which means ‘the abode of the divine God’, not only echoes the spiritual traditions but also reflects the artistic prowess through its intricately carved walls of sandstone and marble.

Though it was the vision of His Holiness Pramukhe Swami Maharaj that galvanized people into action, it was Sadhu Ishwarcharan Das assisted by Sadhu Shrijiswarupdas and Sharad Chandar Jain who put Swamiji’s vision onto paper.

The Akshardham was built in the ancient style of Sthapatyaa Shastraa. The temple was built completely out of solid rock. No iron or solid metal was used. 22 feet long single pieces of stone has been used as support beams.

With these stone beams as support, the temple rises to the height of a 10-story-building. The entire temple is hand- carved.

The enormity of the temple can be gauged from a count of the architectural structures that make the whole. There are 234 pillars with delicate carvings, 9 big and small domes, and 20 quadrangled spires.

Inside the temple, 20,0000 glittering statues and architectural genius play with space to enthrall the visitor. The 11-feet-high gilded image of Bhagwan Swami Narayan is, of course, the cherry on the cake.

The Akshardham Temple is said to be constructed to fulfill the wish of Brahmaswarup Yogi Maharaj who had expressed a wish in 1968 to see a temple being built on the banks of the River Yamuna. His devout and resourceful successor Pramukh Swami Maharaj mustered courage and collected fund to construct this huge temple that has today become a must-visit place for anyone coming to Delhi.

Though it was the vision of His Holiness Pramukhe Swami Maharaj that galvanized people into action, it was Sadhu Ishwarcharan Das assisted by Sadhu Shrijiswarupdas and Sharad Chandar Jain who turned Swamiji’s vision into reality.

The Akshardham Temple was built in the ancient style of Sthapatya Shastra. The enormity of the temple can be gauged from the number of architectural structures it houses. There are 234 pillars with delicate carvings, nine big and small domes, and 20 quadrangle spires. The Temple is so huge that it can keep its visitors riveted through the entire visit.

It was officially thrown open to general public in 2005.

Things to do and see at Akshardham

Indraprastha Park: Besides a children’s park and an amphitheater, this park is home to the World Peace Stupa.

Humayun’s Tomb: This UNESCO World Heritage Site was the first garden-tomb in Indian subcontinent and also the first red sandstone structure of such a scale.

National Crafts Museum: It is one of the largest crafts museums in the country known for its exhaustive collection of textiles.

International Dolls Museum: From Samurai dolls of Japan to Indian costume dolls, the museum has a collection of dolls from almost every country of the world.

Umang Theater, Radhu Palace, and Pashupati Nath Mandir, are other nearby attractions. 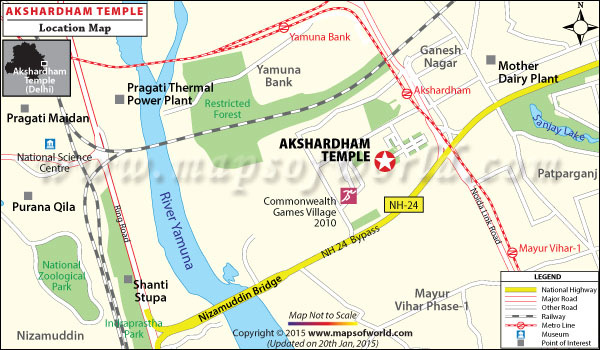 1. Akshardham Temple holds the Guinness record for being the world’s largest comprehensive Hindu temple. It is spread over an area of 86,342 sq. ft.

2. The founder of Akshardham, His Holiness Swami Pramukh Maharaj, holds the world record of consecrating highest number of Hindu temples. He has consecrated a total of 713 Hindu temples – all as per stringent Hindu rituals.

3. 11000 artisans and volunteers were instrumental in completing the temple within 5 years.

4. The temple is entirely hand-carved and is the largest intricately carved wall in India in the last 800 years.

Where is Akshardham Temple?

The nearest international airport is Indira Gandhi International Airport. A cab from there will take you to Akshardham in less than an hour.

From the New Delhi Railway Station a cab will take you to Akshardham in around 30 minutes via Deen Dayal Upadhyay Marg and Subhash Chandra Bose Marg.

The Delhi Metro Rail has a stop by the name of Akshardham on the Blue Line that connects Dwarka to Noida. From the Akshardham Metro Station, it’s a five-minute ride in an auto rickshaw.

The best time to visit Akshardham Temple is from February to April and from October to early December since weather in Delhi remains pleasant during these months.

Admission to the shows is, however, chargeable.

School and college groups are offered a discount.

What are the coordinates of Akshardham?

What are the places to visit near Akshardham?