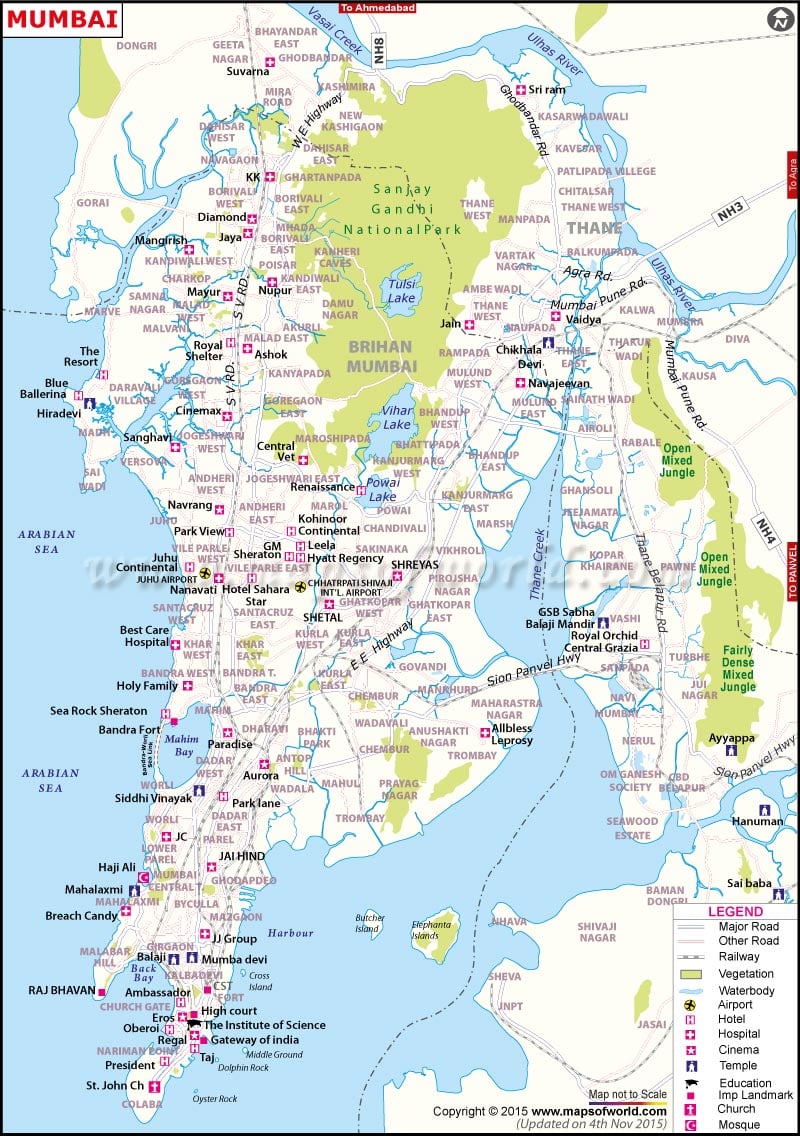 Mumbai is the leading commercial city of India, located on the western coast of the country and is the capital city of Maharashtra state. Often tagged as the city that never sleeps, the city was formerly a cluster of seven islands. In 1498, the Sultan of Gujarat presented these seven villages to the Portuguese who built a fort here. In 1661, the small settlement was handed over to the British as the dowry of Catherine de Braganza who married Charles II. He leased the islands to the British East India Company. They built a fort here and the city later grew around this fort. Mumbai owes much of its development to its port facilities which attracted traders, entrepreneurs and migrant workers.

The city was earlier called Bombay and in 1995, the name was officially changed to Mumbai, which according to many, was the original name of the city. It is the largest metropolis in India. The city covers an area of 603 sq km and has an approximate population of 18 million.

Mumbai consists of seven islands which are joined together. The British started reclaiming land from the sea amidst these islands. Today, the elevation of the city varies from 10 to 15 meters. However, the city rises to a maximum elevation of 450 meters in northern Mumbai. The city is located on the Arabian Sea at the mouth of the Ulhas River and covers most of the Salsette Island whose remaining area is covered by Thane which actually forms a part of the Mumbai Metropolitan region. There are two big lakes in the city, namely Tulsi and Vihar and numerous small rivers like the Dahisar, Poisar and Oshiwara.

The city has a tropical wet and dry climate. Summers are hot and humid while winters are cool and dry. Heavy rainfall occurs during the monsoons from June to October.

Mumbai is very well connected to the rest of the country as well as the world. You can fly to Mumbai from a number of destinations in Asia, Europe and America. The city is served by the Chhatrapati Shivaji International Airport which is located about 28 kms away from the center of the city.

You can travel to almost anywhere within the rest of the country from Mumbai by train. The city has two main terminals at the Mumbai Central and the Chhatrapati Shivaji Terminus or VT. Long distance buses also connect several domestic destinations with the city, but their operation is vastly reduced during the monsoon months.

When it comes to internal transport, the local trains are its lifeline. Spread across 465 km, the suburban railway in Mumbai operates approximately 2,500 train services and carries above 7.24 million commuters regularly.

The best time to visit Mumbai is between November and February when it is cool and the humidity is at the minimum level.

Mumbai has a cosmopolitan culture. Vast variety of people lend diverse color to this city.

Several festivals are celebrated in the city. Some of them are :

Points of interest (places to visit) :
There are a vast number of things to see in Mumbai. Some of them are :