What are the popular places to visit in Ooty, India? - Answers

Located in Tamil Nadu, India, Ooty is one of the most popular hill stations in South India. Situated in the midst of the Nilgiri Hills, its historic significance and scenic beauty lure tourists from across the country. Known as the ‘Queen of Hill Stations,’ Ooty has been declared one of the 14 ‘hotspots’ of the world because of its unique biodiversity. 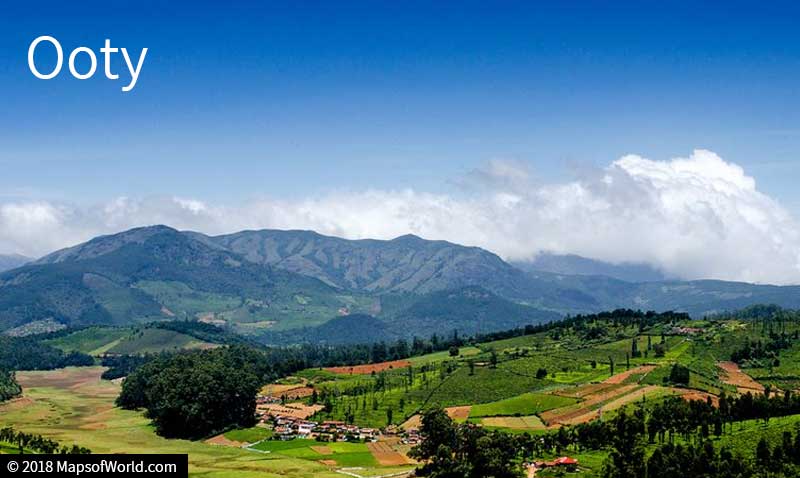 Since a majority of the town’s economy is based on tourism, the local government has done a lot to ensure that all the places to visit in Ooty are clean and have modern amenities.

Government Rose Park – People who love plants will find that Ooty has a lot to offer. Maintained by the Tamil Nadu Horticulture Department, the Government Rose Park is located on the slopes of Elk Hill and has the largest collection of roses in the country. You will come across more than 3,600 varieties of roses and believe it or not, you may find black- and green-colored roses as well.

Ooty Botanical Garden – Ooty Botanical Garden is spread over an area of 22 acres and is quite well-maintained. Laid down by the Marquis of Tweeddale in 1847, it houses thousands of species of plants including a 20-million-year-old fossilized tree and a monkey’s puzzle tree which no monkey can climb. From flowering trees to beautiful shrubs, it also houses rare colored lilies and a variety of ferns and orchids. Maintained by the Horticulture Department of the Government of Tamil Nadu, Ooty Botanical Garden concords “Summer Festivals” in May each year, showcasing rare plant species during the flower show.

Doddabetta Peak – Located around 10 km (about 6 miles) from Ooty, the Doddabetta Peak is the highest point in the area from where you can enjoy the panoramic views of the scenic town. Not only that, if you aren’t satisfied with your binoculars then the Tamil Nadu Tourism Development Corporation has set up a “Telescope house” from where you can get a better view of the Nilgiris.

Ooty Lake – About 3 km (2 miles) from the city, this artificially created lake offers stunning views of the surrounding eucalyptus trees as well as the many bird species that flock to the area. To have the panoramic views of the lake, you just need to hire a boat from the adjacent Boat House. If you come in May, then you can also see the popular boat races and boat pageantry here. And if you are with kids, then the nearby children’s park has a toy train that will surely give a joy ride to your offspring and if that doesn’t, then they may also take a pony ride. Located along the edge of the lake, there is a Deer Park which is one of the few high-altitude zoos in India.

Wax World – The Wax World is located along the Ooty-Coonoor road and has a number of life-sized wax statues of Indian freedom fighters, social activists, and political leaders. Housed in a 142-year-old bungalow, this museum also provides a glimpse of the rural life of the surrounding tribal area.

Tribal Museum – Those interested in the history of Ooty should definitely check out the Tribal Museum which is a part of the Tribal Research Centre and is located about 10 km (6 miles) away from Ooty. The Nilgiri Mountain Railway is a UNESCO World Heritage Site and depicts rare artifacts and photographs of primitive tribal groups of Tamil Nadu and Andaman and the Nicobar Islands. Major attractions here are the three life-size statues of Paniya, Toda and Kota couples and dwellings of the Toda, Kota, Paniya, Kurumba, and Kanikaran tribes. It also has a fleet of steam locomotives that are very popular with tourists

Pykara Waterfall – Located 20 km (12 miles) away from Ooty, Pykara Waterfall is a superb picnic spot. Surrounded with pine trees and Toda settlements, this waterfall not only offers overwhelming vistas to nature lovers but also quenches the thirst of adventure lovers who can enjoy speed boat rides at the lake. Whether you want to relax, stroll, or trek, this nature’s endowment offers opportunities to spree.

St. Stephen’s Church – It is one of Nilgiris district’s oldest church. The timber and the massive main beam was taken from the palace of Tipu Sultan which is situated on the island of Srirangapatna. Scenes like Mary holding baby Jesus in her arms, the crucifixion of Christ and more have been depicted on the stained-glass windows. There’s also a painting of the Last Supper on a wall.

Main Bazaar – This is an important market to collect souvenirs. From local cutlery and grocery items to fancy paintings by the local artists, you can find it all here.

Thunder World – Take a step back into the pre-historic times through the amazing world of Thunder World. This amusement park has a lot of entertainment options for kids such as indoor snow room, a park with dinosaur attractions and also a food court.

Holy Trinity Church – Being one of the oldest Ooty’s landmark, this church is quite popular among tourists and locals alike. It stands out with its Tudor appearance, emphasized by a peaceful cemetery, cryptic carvings, and tarnished stained glass windows.

Lady Canning’s Seat – This is a popular vantage point which offers panoramic views of Nilgiris, meandering village roads, Lamptons Peak, and ancient Droog Fort. This place was Lady Charlotte Canning’s favorite spot where she spent most of her time after her husband was off to perform his Viceroy duties.

Murugan Temple – Set on the Elk Hill, this temple is dedicated to the warrior God Muruga. Besides its spiritual importance, the temple gets brownie points for its brilliant architecture. It also offers panoramic views and picturesque backdrops.

Adam’s fountain – This public fountain was built as a memorial to Ooty’s Governor in 1886. At night, it looks even more spectacular.

As it is such a popular tourist destination, Ooty has a number of places where tourists can stay. Budget travelers will find the facilities at the Hotel Green Apple Residence and Fairstay Ooty more than satisfactory. Hotel Lake View and The Majestic Crown are popular options for people with a mid-range budget. High-end travelers can choose to stay at the Danish Villa Club Mahindra or Fortune Resort Sullivan Court.

How to get in?

By Air – Ooty doesn’t have an airport of its own and the nearest airport is the Coimbatore International Airport. It is about 97 km (60 miles) from Ooty and a cab ride would take about two and a half hours. Ooty also has three helipads. One is in Theettukal and the other two are in Kodanad. The helipad at Theettukal is the closest one, about 4 km (2.5 miles) away. A taxi from the helipad to Ooty will take about 11 minutes.

By Rail – The Udhagamandalam railway station in Ooty is serviced by trains from the Nilgiri Mountain Railways. The nearest major railway station is the Coimbatore Junction Station, which is about 86 km (53 miles) away.

By Road – Ooty is well-connected to nearby areas by roads. It is about 19 km (about 12 miles) from Coonoor and 84 km (52 miles) from Coimbatore by road. Many busses of the Tamil Nadu State Road Transport Corporation ply to and from the town.

The weather in Ooty is usually quite pleasant all year round. However, the best time to visit the town is between April and June and then between September and November.

What are the languages that are commonly spoken in Ooty?

Due to its location, a number of different languages are spoken in Ooty such as Tamil, Kannada, Malayalam, Badaga, and English.

What type of clothes should one pack when traveling to Ooty?