What are the popular places to visit in Srinagar, India? - Answers

A leisurely ride in a houseboat, a walk in a garden with millions of charming tulips “tossing their heads in sprightly dance,” and trekking along the high-altitude lakes: there are enough reasons to consider Srinagar as a worthy destination. The ‘Venice of the East’ and the summer capital of Jammu & Kashmir can surprise you with snowfall or coax you to stay longer by retaining that slight nip in the air. Even before you can completely get over its natural splendor, you find centuries-old history staring at you. The mosques, temples, and tombs also do a world of good to your experience.

Srinagar is located along the banks of the Jhelum River in west Kashmir. It is the summer capital of Jammu & Kashmir.

The city is believed to have been built by Emperor Ashoka in 3rd century BC. Jammu & Kashmir became a part of the Indian Union and Srinagar became its summer capital after India’s independence in 1947. 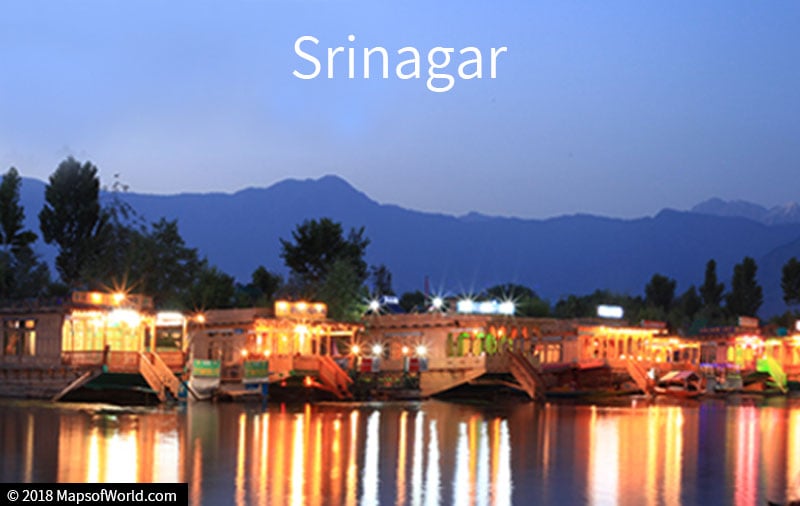 Places to Visit in Srinagar

Dal Lake: Mostly popular for its houseboats – Shikaras – the Dal Lake is where the lotuses bloom and tranquility reside. Spanning across 26 sq. km. (about 10 sq. miles), the lake is divided into four sections with Nagin Lake as one of them. From kayaking to swimming and canoeing to relaxing in houseboats, Dal Lake offers a lot of opportunities for summertime recreation.

Nigeen Lake: Ennobled as the ‘Jewel in the Ring,’ the Nagin Lake is considered by many as a separate part of Dal Lake, but it is actually connected to it by a narrow causeway. The lake offers quietude and serenity.

Jama Masjid: Built in 1674, the Jama Masjid is among the oldest mosques in Srinagar. With four spires, 370 pillars, and prayer halls, the mosque is an exquisite exemplar of the Indo-Saracenic architecture. Each pillar of this mosque is made from a single piece of the Himalayan cedar trunk. The mosque was destroyed and restored many times during the course of history. It is also known as the Friday Mosque.

Hazratbal Mosque: This white marble mosque on the banks of Dal Lake is a rare unification of Kashmiri and Mughal styles of architecture. It is also called Dargah Sharif. The shrine is believed to contain a relic – a strand of hair of the Prophet Muhammad.

Shankaracharya Temple: Located on top of the Shankaracharya Hill, the temple is believed to be built around 200 BC by Jaluka, the son of Emperor Ashoka. It is considered by some historians that it was a Buddhist temple which Adi Shankara converted into a Hindu place of worship dedicated to Lord Shiva. From the hilltop, visitors get a panoramic view of the snow-clad mountains of Pir Panjal Range and Srinagar.

Sri Pratap Singh Museum: Established in 1898, the museum exhibits some of the rare terracotta heads belonging to the 3rd century, collected from a Buddhist site in Ushkur; molded terracotta plaques belonging to the 4th and 5th centuries from Harwa; an ancient brass model of Lokeshvara; and a 5th-century image of Buddha in the Gandhara architectural style. The museum also houses old coins, musical instruments, manuscripts, miniature paintings, armory, textiles, sculptures, and items of leather, grass, and willow work.

Indira Gandhi Tulip Garden: Situated at the foothills of the Zabarwan mountain range near Dal Lake, the garden is famous for its annual Tulip Festival that lasts for seven days. Being the largest Tulip garden in Asia, it houses more than 70 varieties of colored tulips totaling almost two million tulips. Other gardens in the vicinity include Shalimar Bagh, Nishat Bagh, Achabal Bagh, Pari Mahal, and Chashme Shahi Garden.

Nishat Bagh: Built by Abdul Hasan Asaf Khan in 1633, this is one of the largest Mughal gardens in Srinagar. Literally meaning the ‘Garden of Joy,’ Nishat Bagh gladdens your heart with its variety of flowers, 12 adorned terraces, blooming flowerbeds, and embellished musical fountains. The tourists must remember that tulips bloom for only 15 days in a year and they must plan accordingly to catch a glimpse of the natural beauty.

Dachigam Wildlife Sanctuary: Girded by mountains and marked with grasslands and rocky cliffs, the sanctuary is spread over an area of around 141 sq. km. (about 54 sq. miles) Declared as a National Park in 1981, the sanctuary is known for its avifauna species and the Hangul or the Kashmir Stag. A special permit is required to enter the park.

Shalimar Bagh: The Bagh was built by Mughal Emperor Jahangir in 1619 for his wife Noor Jahan. Now opened to the public, it impresses with its architectural details, emphasized through three terraces. This Mughal garden is also linked to the northeast part of Dal lake through a channel.

Chashme Shahi Garden:  Although the garden showcases Mughal architecture, it also shows Iranian and Persian influence in art and design respectively. The park stays open to the public from March to November. This Mughal garden also provides panoramic views of the Dal Lake.

Sinthan Top: Feel all the way up in clouds at this high point located in the Pir Panjal mountain range. Located 3785 m high, it is a great spot for skiing, trekking, and mountaineering.

Things to Do in Srinagar

You must visit the almost three-hundred-year-old Muslim meeting hall – Khanqah Shah-i-Hamadan, the magnificent Mughal Garden, Badshah Tomb, and the Wular Lake. Shikara ride in the Dal Lake, Paragliding in Astan Marg, and trekking along alpine lakes are much sought after activities.

There are plenty of accommodation options for tourists in Srinagar. Hotel Sadaf and Hotel New Prince Inn offer excellent rooms at pretty decent prices. For those who wish to enjoy their stay in complete luxury can put up at the Vivanta Dal View or The LaLiT Grand Palace. Generally, most tourists prefer to rent a houseboat for the entire duration of their stay.

While the Krishna Vaishno Dhaba serves scrumptious vegetarian food, Ahdoos is the perfect place to try Mughlai cuisine. You can also gorge on delicious pastries and mutton at Jee Enn Bakery.

The city is blessed with cool weather throughout the year, so tourists may visit here at any time. However, April to October is considered the best time to visit the city as this is when you get to see beautiful flowers in their full glory (Tulip season too is towards March’s end) and enjoy a pleasant weather. But if you like winters or wish to see the snow-covered slopes then visit Srinagar from October to March when frozen Dal lake becomes a playground. You can also enjoy ice-skating and skiing.

By Air – The Srinagar International Airport is about 11 km (about 7 miles) from the city center. A drive to the city takes about 20 minutes. A number of flights operate from the airport connecting Srinagar to major cities in India.

By Rail – The Kashmir Railways connect the city with Baramulla, Anantnag, and Qazigund. The nearest major railway station connected to the Indian Railways is Jammu Tawi, which is about 300 km (about 186 miles) away. Cabs take you to Srinagar from there in around seven hours.

By Road – Since Srinagar is the capital of Jammu & Kashmir, it is well-connected to other parts of the country by road. National Highway 1A and National Highway 1D connect the city with Jalandhar and Leh respectively.

Auto-rickshaws are quite convenient when it comes to getting around the city. However, taxis and buses are also available in the city.