What are the popular places to visit in Mussoorie, India? - Answers

Mussoorie enjoys the sobriquet of ‘Queen of Hill Stations’ for reasons more than one; Crisp mountain air, white-capped Himalayan peaks, and summer palaces of the erstwhile British rulers take you to an Alpine land where beautiful vistas, waterfalls, and flowers abound. This celebrated hill station in the state of Uttarakhand has an illustrious past and a vibrant present. Due to its proximity to Delhi and other North Indian cities, it is a preferred weekend getaway for many. 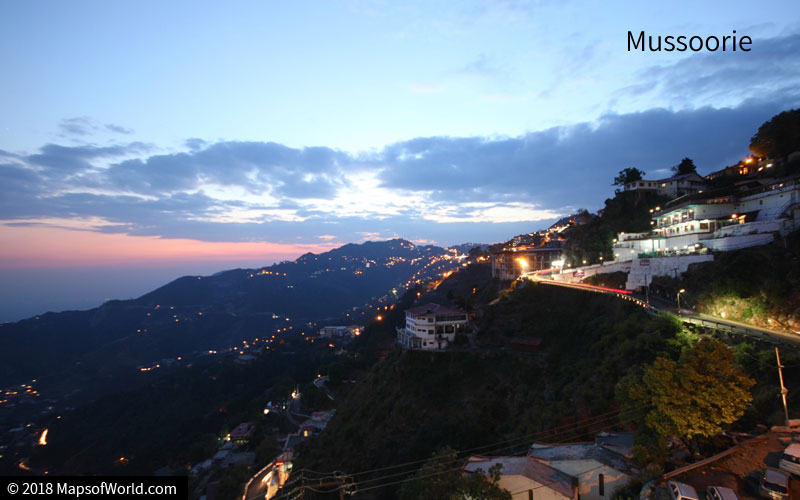 Places to Visit in Mussoorie

Gun Hill: The second highest peak in Mussoorie is 2,122 meters (about 6,962 feet) above sea level. The place is named after a cannon on the top of the peak that used to be fired to let people adjust their watches. A cable car is a faster way to reach the top and enjoy panoramic views of Mussoorie, the Doon Valley, and the Himalayan ranges: Srikantha, Pithwara, Gangotri, Bunderpunch, and more.

Kempty Falls: Enclosed within the hilly tracks of Uttarakhand, the falls are located along the Yamunotri Road about 15 km (about 9 miles) from Mussoorie. It is estimated that one million tourists visit the place each year. Situated at an altitude of 4,500 feet, the Kempty Falls splits into five other cascades.

Jharipani Falls: Jharipani Falls offers beautiful views of the Shivalik Range. A 1.5-km (about 1 mile) long trek through hilly terrains takes you to this destination.

Van Chetna Kendra: Located on the Tehri Bypass Road, the place covers an area of 339 hectares endowed with pine trees and flowering shrubs. Within Van Chetna Kendra is the Benog Wildlife Sanctuary which is home to rare birds like the white crested kaleej pheasant, the snow partridge, the bush quail, the blue rock pigeon, and the whistling thrush.

Company Garden: Also known as Municipal Garden, the place features an artificial lake. It is a perfect picnic spot where you can enjoy boating and witness the fascinating flora.

Jwalaji Temple: Located about 9 km (about 5.6 miles) away from Mussoorie on the top of Benog Hill at a height of 2,240 m (about 7349 feet), this temple of Goddess Durga is surrounded by thick forests. It offers spectacular views of the Shivalik Range. The Navratra is celebrated with much gusto and vigor.

Nag Devta Temple: This temple is dedicated to Lord Shiva. It is about 6 km (about 3.7 miles) away from Mussoorie along the Cart Mackenzie Road.

Sir George Everest’s House: The house was owned by Sir George Everest, who was the Surveyor-General of India from 1830 to 1843. It is located about 6 km (about 3.7 miles) from Gandhi Chowk in Mussoorie. Although the building and the laboratory of Sir George Everest is not in perfect condition, it offers breathtaking views of the Doon Valley, the Yamuna Valley, and the Himalayas.

Nahata Estate: The huge property, which spreads over an area of 300 acres, is located on the slopes of Lal Tibba – the highest peak in Mussoorie. The view of the snow-clad mountains from here is enchanting.

Cloud End: The Cloud End Bungalow towards the western edge of Mussoorie was built in 1838 by a British Major and is one of the first four buildings to be built in Mussoorie. The place offers beautiful vistas of the surrounding area, including the Himalayas. It is also home to a wide variety of plants and animals. Currently, Clouds End has been converted into a hotel.

Mussoorie Lake: Located 6 km (about 3.7 miles) from Mussoorie along the road to Dehradun, the lake is a relatively recent development in the city. It has pedal boats and offers beautiful views of the Doon Valley and the villages situated nearby.

Lake Mist: It is located about 5 km (about 3.1 miles) from Kempty Falls along the Mussoorie-Kempty Road and offers tourists with a restaurant and accommodation along with boating facilities. Lake Mist also has many small waterfalls made by the Kempty River.

SOHAM Heritage & Art Centre: This is a popular museum which emphasis on art and culture of Himalayas. There, you’ll find a variety of photos, artifacts, paintings and more.

Christ Church: This 19th-century church is still standing gracefully. Located near the Mall Road, it impresses you with its stained-glass windows and Gothic architecture.

Shedup Choephelling Temple: Also goes by the name of Tibetan Buddhist temple, it is a popular shrine there. The serene vibe of the temple will keep you hooked. The temple also houses books and literature relating to Tibet. There are also colorful prayer flags and clay lamps housed in there.

Things to Do in Mussoorie

There are quite a few budget and mid-range hotels in Mussoorie. The Hotel Ashirwad and Hakmans Hotel are popular among those who are on a shoestring budget. High-end travelers can check in at any of the luxury hotels in Mussoorie such as Jaypee Residency Manor and Royal Orchid Fort Resort.

The town is home to a number of food joints and restaurants that find a mention in travelogues. The Lovely Omelette Center, according to the visitors and reviewers, prepares the best omelets in India. You can get a taste of European cuisines at the Imperial Square. The Casa Mia Bakery, Chick Chocolate, and Little Llama Cafe are some of the most famous eateries in Mussoorie. The Neelam restaurant specializes in regular Indian curries, cuisines and Mughlai dishes.

During the winter, weather can become quite harsh. Hence, the tourist influx is felt mainly in the summer months between April and July. It is also quite popular between September and November when flowers bloom and weather remains warm.

How to Reach Mussoorie?

By Air – The closest airport to Mussoorie is Jolly Grant Airport in Dehradun. It is about 51.5 km (about 32 miles) away from Mussoorie and a drive would take approximately 2 hours.

By Road – Mussoorie is well connected to all major cities in the region via road. Both government and private luxury buses ply between Delhi and Mussoorie.