What are the popular places to visit in Mount Abu, Rajasthan? - Answers

Mount Abu is a hill station in the state of Rajasthan, India. As it is the only hill station in northwest India, it is very popular with tourists & visitors looking for a respite from the summer heat. Mount Abu offers visitors a place abundant with flora and fauna along with majestic sights and a plethora of temples.

It is located in the Sirohi district of Rajasthan, India, and is situated in the Aravalli Range. 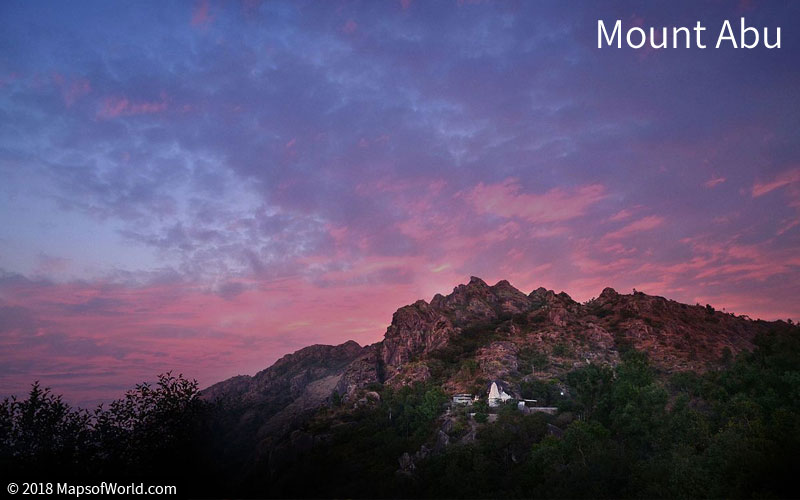 Places to visit in Mount Abu

Dilwara Temples: Built between the 11th and 13th centuries, the temples are one of the finest examples of Jain temples in the world. Dilwara Temples are actually a complex of five separate temples dedicated to the five Jain saints or tirthankaras. The interior of the temples features idols that are exquisitely carved out of marble, especially the pillars and the ceiling. From beautiful chandelier-like marble ceilings to intricately carved idols on the pillars and walls, the temples reflect the audacity and brilliance of the craftsmen of that time.

Shri Adi Nath Temple or Vimal Vasahi Temple: It was built in 1031 by Vimal Shah. This temple is the oldest temple amongst the five and is dedicated to the first tirthankara. There are minute images of saints that are carved inside cells on marble. The dome of the temple features designs of flowers, while the main hall of the temple has carvings of female figures playing musical instruments. The Guda Mandapa is a hall located within the temple that has the images of Shri Adi Nath carved out baroquely and flamboyantly.

Shri Parshavanath Temple or the Khartar Vasahi Temple: It was built between 1458 and 1459 by the people belonging to the Mandinka clan. The temple is easily identified as it has the tallest shrine and it has four large Mandapas. The outer walls of the sanctum comprise beautiful sculptures in gray sandstone, depicting Dikpals, Vidhyadevis, Yakshinis, Shalabhanjikas and other ornamental sculptures that can be easily compared to the sculptures in Khajuraho and Konark.

Shri Mahavir Swami Temple: It was constructed in 1582. It is devoted to the 24th saint in Jainism, Mahavira. The temple is small as compared to the rest of the temples; however, the craftsmanship of the temple cannot be doubted.

Shri Rishabha Devi Temple: It is also called the Peethalhar/Pitalhari Temple, due to the fact that a majority of the statues in this temple are made from brass or Pittal. A massive metal statue of first Jain Tirthankara Rishabha Dev (Adinath), cast in five metals, is installed in the temple.

The Shri Neminath Temple or the Luna Vasahi Temple: It was built in 1230. The temple has a single hall called the Rag Mandapa which has 360 small idols of Jain tirthankara carved in marble.

Nakki Lake: According to a local legend, Nakki Lake was dug out by nails (nakh) and hence the name. The lake offers tourists with a nice picturesque location where they can enjoy a bit of boating on the lake. If they want, they can also take a stroll around the perimeter that will take about 45 minutes. The lake is surrounded by mountains, gardens, and rock formations, such as Toad Rock.

Sunset Point: As the name suggests, the Sunset Point is a spot that offers visitors mesmerizing views of the sunset. It is one of the most popular attractions in Mount Abu and as a result, it can get quite crowded at sunset. So be early to catch a suitable spot.

Achalgarh Fort: Located a couple of miles away from Mount Abu, Achalgarh Fort is located on top of a mountain and is another popular tourists’ attraction in Mount Abu. It was originally built by the Paramara Dynasty rulers; however, later Rana Kubha, the ruler of Mewar, commissioned it and renamed it as ‘Achalgarh’ or the immovable. It is surrounded by huge walls and offers stunning views of the surrounding area. Close to the fort is the Achleshwar Temple which is dedicated to Lord Shiva. According to legend, the temple is built around a toe print of Lord Shiva. The temple has many different sculpted idols including a large metal sculpture of Nandi, the bull, the mount of Lord Shiva. The sculpture is said to weigh four tons and is an alloy of five metals; namely, gold, silver, copper, brass, and zinc.

Guru Shikhar: At a height of 1,722 m (about 5813 feet) above sea level, the Guru Shikhar peak is the tallest mountain in the Aravalli Range and offers a gorgeous view of the surrounding areas. Near the peak is a temple dedicated to Guru Dattatreya who is believed by many to be the reincarnation of the gods: Brahma, Vishnu, and Shiva.

Brahmkumaris World Spiritual University: Headquarters of the spiritual movement called Brahmkumari, it has a large hall with a capacity of 3,000 people where global spiritual events are held and spiritual and meditation sessions are conducted. The Brahmkumaris World Spiritual University campus also houses a Peace Park and World Renewal Spiritual Museum. Every year, thousands of people from around the world throng this place in search of inner peace and tranquility.

Adhar Devi Temple: The temple is situated in a cave and is very popular amongst tourist. The temple can only be reached by climbing nearly 360 stairs and then visitors will have to crawl through a small opening to gain entrance to the temple. The temple has many beautifully carved statues along with a grand view of the surrounding area.

Gaumukh Temple: The temple is dedicated to Saint Vashishtha who is believed to have performed a yagna or an offertory ritual to the gods at the pong called the Agni Kund. Next to the temple is a spring that is said to emerge from a rock in the shape of a cow’s head and a large marble statue of Nandi was built on the site along with statues of Saint Vashishtha, Lord Ram, and Lord Krishna. The temple is popular amongst excursionist or those who are looking for a picnic spot since the views from the temple are quite amazing.

Trevor’s Tank: It is a man-made tank built by an engineer named Trevor who wished to create a breeding ground for crocodiles and hence, it is also called Trevor’s Crocodile Park. The park has many viewing stations that can be used to check out the local wildlife in the area, especially crocodiles.

Mount Abu Wildlife Sanctuary:  The area was declared a wildlife sanctuary in 1960 and is very popular destinations for eco-tourists. It is one of the oldest parts of the Mount Abu mountain ranges – the Aravalli Range. It is about 7,000 meters (about 4.3 miles) long and only 300 meters (about 0.2 miles) wide. Due to the narrowness of the sanctuary, the chances to see animals get increased. The area is rich with flora, especially herbal medicinal plants, and fauna. You can catch the glimpse of animals like small Indian civets, wolf, hyenas, jackals, Indian foxes, porcupines, hedgehogs, grey jungle fowls, wild boars, sambar deer, langurs and many others.

By Air: The Maharana Pratap Airport in Udaipur is the closest airport to Mount Abu. It is about 176 km (about 109 miles) away and it is just two and a half hours away from Mount Abu.

By Rail: The closest railway station to Mount Abu is the Abu Road Railway Station. It is about 28 km (about 17 miles) away from Mount Abu and a drive from the station to the hill station will take about an hour.

By Road: Mount Abu is well-connected to all nearby major cities by a system of roads. There are a number of state-run buses that ply to and from the nearby cities.

February to April and August to November are generally considered the best times to visit Mount Abu.