What are the popular places to visit in Bengaluru? - Answers

The Silicon Valley of India has always been labeled a forward-thinking city that has the finest climate, cosmopolitan lifestyle, and swanky shopping destinations. The present-day Bengaluru was designed in 1537 and the city established its reputation as a Science & Technology center in the early 21st century. Bengaluru carries the tag of ‘the most liveable city in India’ with ease. It attracts tourists from across the world by virtue of its rich history, cultural heritage, beautiful gardens, and the carefully preserved colonial buildings. The pub city is also home to some of the most famous watering holes.

It is the capital of the South Indian state of Karnataka. The city is over 267 miles (430 km) from the temple town of Madurai and about 217 miles (350 km) from Chennai. 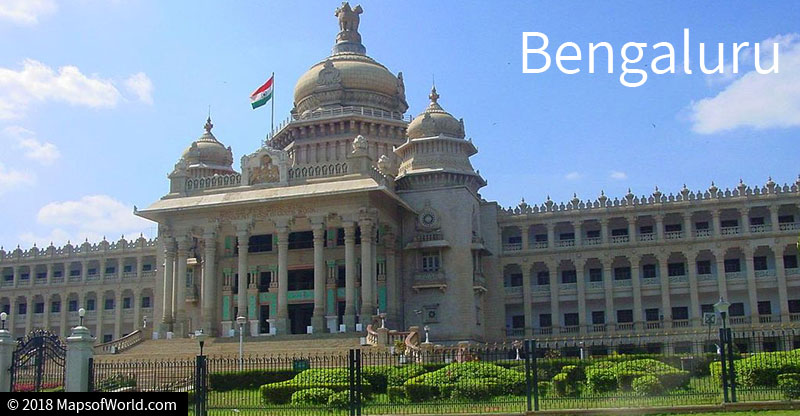 Places to Visit in Bengaluru

Vidhana Soudha: An impressive example of neo-Dravidian architecture, this landmark building has been serving as the seat of the State of Karnataka since 1956. The government building has massive assembly chambers with a large central dome that measures almost 197 feet in diameter and is supported by eight pillars. However, the main attraction of the building is the grand staircase. Another popular part of the structure is the inscription, “Government Work is God’s Work.’ One can take prior permission and get an entry pass to view the place.

Tipu Sultan’s Summer Palace: The two-storied summer residence of Tipu Sultan is built entirely out of teak wood. Everything about the palace, including pillars, arches, and balconies reflect the Indo-Islamic style. It is said that the Mysorean ruler used to hold his ‘durbar’ (meeting in the King’s court) here. The rooms on the ground floor serve as a museum complete with portraits of his contemporaries, his crown, gold pedestals, and more. The palace also contains a replica of ‘Tipu’s Tiger’ whose original version is displayed at the Victoria and Albert Museum in London.

Bangalore Palace: The Bangalore Palace, which has magnificent Tudor architecture, was built to look like Windsor Castle in England. The interior of the palace is lavishly decorated with fluorescent blue ceramic tiles, stained glass windows, paintings, and more. One of the top attractions of the palace is the dining table of the Diwan of Mysore. It has a mother-of-pearl inlay with Chinese lacquer work.

HAL Aerospace Museum: A trip to the museum is a must for those traveling with kids or those with an interest in aviation. The exhibits in the museum detail the history of aeronautical aviation in India. Exhibits include aircraft, helicopters, aircraft engine models, and more. There is also a flight simulator where tourists can get a feel of flying actual planes without ever leaving the ground.

Lal Bagh: The garden has over 1800 species of plants and also has a large number of tropical plants in India. The grass house inside it is quite a hit among tourists. The garden hosts an annual flower show and houses an aquarium and a lake.

ISKCON Temple Bangalore: One of the largest ISKCON temples in the world, it gathers plenty of tourist population in a year. Located on the Hare Krishna hillock, it has a beautiful 17 m (56 ft) gold-plated flag post and Kalash Shikara which is 28 ft (8.5 m) high. The temple distributes free prasadam to the visitors during the Darshana hours.

Cubbon Park: There are multiple facets to this parks. While in spring, it makes it to a nature lover’s good books and during other times, it makes for an important center for busy locals going about their lives. It houses pavilions, statues, a toy train, an aquarium, a tennis academy, museums, and a  library – a complete package for everyone.

Surayanarayana Temple: Built of granite in Chola architecture, this is one of the most prominent temples dedicated to God Sun. The 3.25 feet high idol of Suryanarayana along with an ornate arch were brought from the Badrinath Temple. The highlight of this temple is various colorful figures which cover its huge tower. There are also other idols present here of  Panchamukhi Ganesha,  Vaishnavi, Brahma, Saraswati, Nagaraja and more.

Karnataka Chitrakala Parishat: This visual art complex houses 18 galleries, out of which 13 have a permanent collection of folk art, sculptures, and paintings. There is an amazing collection of Leather Puppets and Mysore paintings which will impress you effortlessly. The Parishat also organizes a cultural event every year which exhibits affordable art to the public.

Things to Do in Bengaluru

White water rafting in Bheemeshwari, zorbing at Nandi Hills, trekking and camping at Ramanagara, and enjoying lion and tiger safaris at Bannerghatta National Park, are some of the activities that give you the taste of adventure. Moreover, you can go shopping at Brigade Road, Commercial Street, and Tibet Mall.

The Signature Inn and Hotel Swagath are excellent budget options for travelers, while mid-range travelers would be happy to stay at the Iris Hotel and The Elanza Hotel. High-end travelers can opt for The Oberoi Bengaluru and the St. Mark’s Hotel.

South India’s finest coastal delicacies and cuisines are served at Karavalli restaurant. Many consider Koshy’s Bar & Restaurant as the ultimate destination for foodies. Try The Fatty Bao rooftop restaurant for chic Asian dining. Get Japanese cuisines at Harima Japanese Restaurant and the taste of Europe at Caperberry. Barbeque Nation is one destination for kebab lovers and admirers of Mughlai food.

It is an all-weather destination. However, the period between September and February is considered the best time to visit the city.

By Air – The Kempegowda International Airport is the main airport in Bengaluru. It is located about 22 miles (35 km) away from the city center and driving would take about an hour.

By Rail – Bengaluru City Railway Station is the main railway station in the city.

By Road – It is well connected to other major cities in India by a network of National Highways. Both private and state-run buses connect Bengaluru with major cities such as Chennai, Coimbatore, Hyderabad, Madurai, Mangalore, and Mumbai.