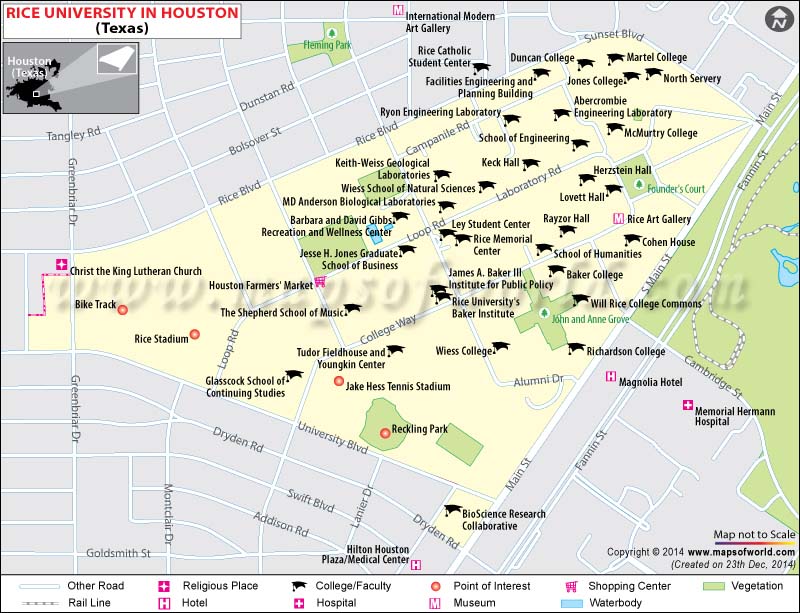 About Rice University in Houston 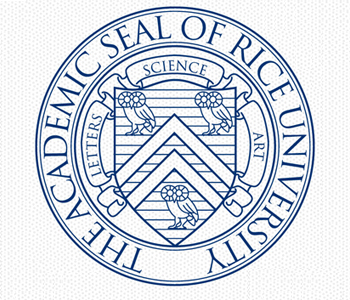 Rice opened in 1912, after the death of William Marsh Rice, for whom the school is named. Rice was a wealthy businessman who left his estate to fund a university for Texans. In his wishes, Rice requested that the institute to be tuition-free to provide an education to anyone who was interested. Though Rice was coeducational from the start, its charter stated that it only admitted white students. This situation was remedied to allow students from any race in 1964. Shortly after that in 1965, Rice ended its tuition-free education system and began expanding the campus with the tuition money it received.

At this point, Rice added the schools of management, music, and social sciences, and added campus housing for the female students, who up until this time were not able to live on campus. Today, Rice has especially strong programs in the applied sciences, material sciences, nanotechnology, and has excelled in research of artificial hearts.

Rice boasts one of the smallest student to faculty ratios of all universities in the United States, at about six students per professor. As a result class sizes are small, with most of them containing fewer than thirty students.

With an acceptance rate of about 19 percent, Rice is a fairly difficult university to get into, though students are accepted to the university rather than its individual colleges. This also helps students who change their areas of study during their college careers, since they are able to switch majors freely. Undergraduates can study at one of six colleges, and two of Rice’s colleges are dedicated solely to graduate students. There are around 360 degrees available at Rice, in its sixty academic departments.

Students at Rice follow a liberal arts style education, with a general education course list that requires students to take what are called distribution courses outside of their main area of focus. Research opportunities are available to undergraduates and graduate students, especially in the fields of nanotechnology, space science, and bioscience. Rice is home to the country’s first nanotechnology center, called the Smalley Institute for Nanoscale Science and Technology, as well as many other laboratories and institutes.

Bang For Your Buck
Tuition at Rice is currently $34,900 annually, with room and board costs of $12,270. With the additional fees, books, and personal expenses, the estimated total cost of attending Rice is $50, 171.

Rice has a no-loans policy for students with a family income lower than $80,000, so students do will not graduate with a large debt load. Like many universities today, Rice has a need-blind admissions policy, so that it does not discriminate based on family income, and pledges to help students pay for their college.

Need-based scholarships are available in a variety of forms. About 61 percent of students receive financial aid at Rice, which can be in the form of grants and scholarships, which do not need to be repaid, federal aid, and student loans.

Rice athletes place in the NCAA Division I in Conference USA. There are fourteen varsity teams at Rice, some of the most popular teams are the football, baseball, and basketball teams.

Where is Rice University in Houston

Houston is located in Texas in the southern United States, and is the fourth largest city in the country. As a large city, Houston offers a wide variety of opportunities for entertainment, jobs, and internships to students at Rice. The university itself is located near many impressive museums in Houston, which offer an educational activity for students with free time.

Though Texas is not known for being lush and green, the Rice campus is located in a wooded area, and is host to many green areas and even more trees. Architecture on campus is mostly in the Byzantine style, with light colored bricks, columns, and archways. The buildings and residential colleges at Rice are divided into quads to create small communities all around campus.

Rice has a very different college experience to offer its applicants, with nationally recognized programs in many scientific fields, many research opportunities, a small school atmosphere, all headquartered in Houston, Texas. Students at Rice will gain a strong education while creating bonds with the school’s diverse population and notable faculty in the tiny classes at Rice.