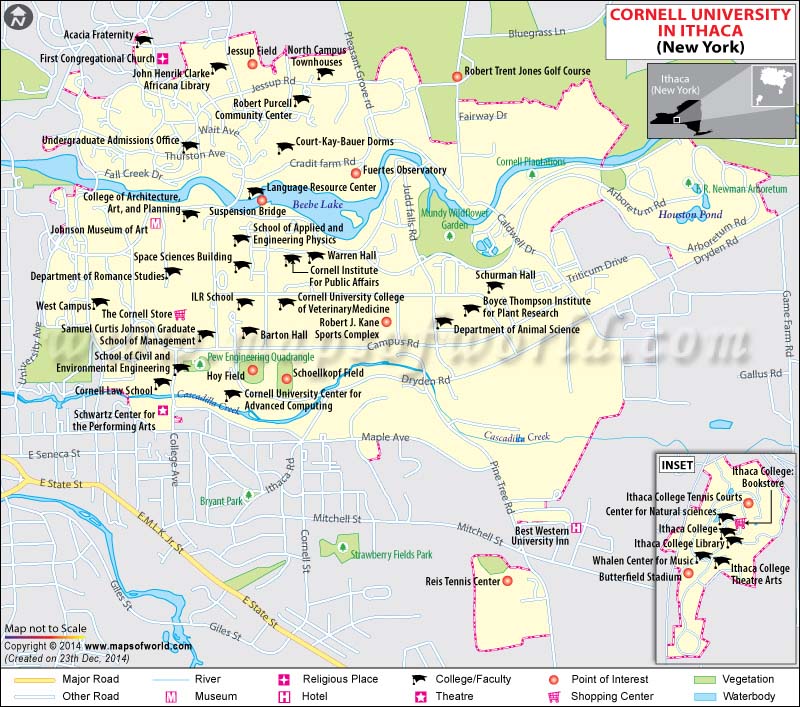 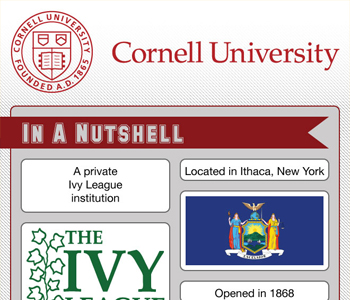 In a Nutshell
Cornell University is a a private Ivy League institution located in Ithaca, New York. As a fairly sizable university with an undergraduate enrollment of about 13,935, and a graduate student enrollment of about 7,004, Cornell offers many opportunities to its students, including a wide variety of courses, research and international programs, and a diverse student body.

Cornell was founded in 1865 by Ezra Cornell, who had a vision to create an equal opportunity university, with an emphasis on diversity from the start. Ezra Cornell used his own money to create the school’s endowment and gave up his own land on which the school was built. Co-founder Andrew Dickson White was the school’s first president, and the school opened in 1868.

Cornell is a fairly selective university, with an admissions rate of 18 percent. Cornell is a larger school compared to many of the other schools in our list. Divided into about seven undergraduate colleges and seven graduate schools, Cornell offers its students over 4,000 courses and about one hundred academic programs. For undergrads, this means there are about 80 majors to choose from.

Though the focus at Cornell is on undergraduate education, this university also has a strong emphasis on research. Its library system has been ranked in the top ten for academic research libraries in the country. There are four national science foundation national research centers, in addition to several other facilities. The research done at Cornell is especially centered on conservation and life sciences. For students, there are research opportunities either on a volunteer basis, for academic credit, or even for pay.

In recent years, Cornell has opened education programs in countries around the globe, including Qatar, India, Singapore, and China, and considers itself a transnational university. This is in addition to a full study abroad program which sends students to study at a different university for a term. Cornell also has programs of its own at the New York City campuses, which include medical schools and a tech school.

Many notable faculty have been associated with Cornell, like Carl Sagan and Richard Feynman. Some of Cornell’s famous alumni include E.B. White, Toni Morrison, and Bill Nye the Science Guy.

Bang For Your Buck
Cornell tuition is a good deal for residents of the state of New York, who can attend Cornell for a discounted rate. For New York residents, tuition at Cornell is about $27,273, while out of state students pay $43,413. Housing at Cornell runs about $8,112, and food costs are about $5,566. These costs in addition to other estimated supplies and fees will run a New York State resident a total of $43,450 and out of state students almost $60,000.

Fortunately, many financial aid options are available to students both in and out of state. Cornell offers need-based aid rather than merit-based or athletic scholarships. Some of the available options are the Cornell University Grant and the named Endowed scholarships, for which all students applying for financial assistance are considered.

Social Scene
Cornell has an active social scene, with over 800 student organizations, a strong Greek system with more than forty fraternities and sororities. About one-third of undergraduate students at Cornell come from a minority background. Students at Cornell come from each of the fifty states, though New York is best represented, and a wide variety of other countries.

Freshmen at Cornell live together to build their community and class unity in residence halls and themed residences known as Program Halls on North Campus. Upperclassmen can decide whether to live in dorms on West Campus or in Collegetown, in the university’s first dorm, Cascadilla Hall. Another option is to live in one of the many fraternity and sorority houses on North and West Campuses.

The architecture around campus is an odd mix of styles, including Gothic, Victorian, and Neoclassical. Unadorned, simple buildings are also found all around campus, which reflect the quick growth of the university that did not allow for careful planning during the expansion.

Where is Cornell University Located

Cornell’s location in Ithaca, New York means that this campus offers plenty of natural beauty, perfect for outdoorsy students. The campus itself offers views of Cayuga Lake, in the Finger Lakes of New York, which are great places for boating, fishing, and swimming. The campus is surrounded by hiking trails, waterfalls, and beautiful gorges, and there are four state parks right next to campus. The city of Ithaca is a small college town with a unique atmosphere. Not far from the Cornell campus is Greek Peak, which offers snowboarding, skiing, and other snow sports.

Why Cornell Made Our List
Cornell is a reputable Ivy League university that offers a much different experience from some of the other Ivies, with its larger student population and location in Ithaca, New York. Cornell has a long history of providing its students an excellent education, from famous professors and alumni to scientific breakthroughs in its research programs. New York residents will find Cornell especially appealing, with its discounted tuition fees that make a college education much more affordable for the average student.

16th President of the US – Abraham Lincoln