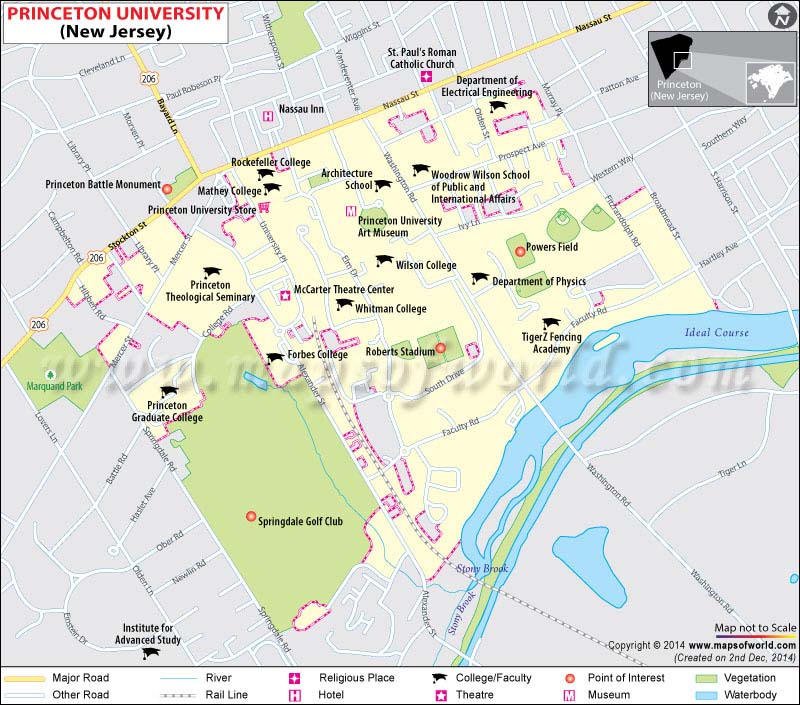 About Princeton University in New Jersey 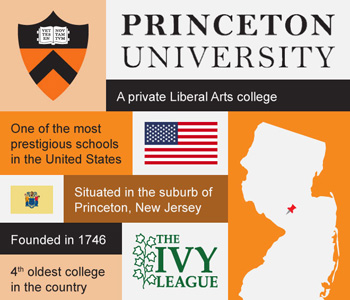 In a Nutshell
Our top spot goes to Princeton University, a private Liberal Arts college situated in the suburb of Princeton, New Jersey, and one of the most prestigious schools in the United States. Founded in 1746, Princeton is the fourth oldest college in the country, so there are plenty of historical sites and notable alumni found at this school. As part of the Ivy League, (an athletic conference as well as a division of elite institutions in the Northeast), Princeton consistently ranks near the top of lists of the best universities in USA- and for good reasons.

The total undergrad enrollment for Princeton is only about 5,100 students, who mostly reside in student housing on the 500 acre campus. The relatively small number of enrolled students demonstrates Princeton’s selectivity, fosters strong communities, and allows students to receive one-on-one attention. Princeton’s calendar follows a semester system, which begins in September and ends in June.

The resources such as Princeton’s many libraries, research and athletic facilities, and esteemed faculty begin to make up for this schools $37,000 annual tuition (for the 2011-2012 school year), but aside from prestige and reputation, one of the most important aspects of attending Princeton is the networking potential.

With a distinguished faculty of award-winning professors, winners of the Nobel and Pulitzer prizes, as well as many National Medal of Science winners teach many of Princeton’s challenging courses across thirty-four departments. A student to faculty ratio of just six to one gives students an opportunity to work closely with the esteemed faculty. Undergraduates can receive a Bachelor of Arts or a Bachelor of Sciences, in addition to completing interdisciplinary certificate programs in one of forty-six areas of study. Seniors at Princeton are required to complete a written thesis to receive their undergraduate degree.

Princeton boasts eleven libraries with a total of over thirteen million publications inside, making it one of the largest university collections in the nation. As a school with high research activity, students have greater opportunity to work as a research assistant or learn from some of the leading specialists in their fields.

Princeton is very selective about the students admitted, accepting only 8 percent of all applicants, who are at the top of their high school classes and at the highest percentiles for standardized test scores as well. In 2006, Princeton attempted to end their early admissions program in order to level the playing field, but the admissions department brought it back in recent years when other universities did not follow suit.

Bang For Your Buck
A large part of why Princeton beats out other universities around the nation is its value – which isn’t all about tuition costs. Though the $37,000 price tag is pretty steep, Princeton has been offering its students grants rather than student loans since 2001. The average financial aid grant for the class of 2015 more than covers the entire cost of tuition at Princeton, which comes from a combination of federal aid and school aid, coming from Princeton’s endowment – the largest in the world per student. More than 60 percent of students at Princeton receive financial aid, and the university strives to make school affordable for every student it admits, giving it one of the strongest financial aid programs in the country.

With the notable professors and alumni, strong research and student services, and a near perfect retention and graduation rate, Princeton is a great value for its costs.

Social Scene
Princeton gets high scores for its social scene, with a good residential community of six houses and several eating clubs, which serve as both dining commons and social clubs for evening and weekend activities. Over 98 percent of undergrads at Princeton live on campus, in the dorms as freshmen and sophomores, and in upper class housing for their final two years. Princeton places a focus on community service, offering outdoor educational community service opportunities, and encouraging involvement in the surrounding suburbs.

Sports are an important part of the culture at Princeton, with a football team that is part of the Ivy League rivalry, helping strengthen community bonds, good rowing teams, and strong lacrosse teams for both women and men.

Princeton loses some points for lack of diversity, since the student population is about 50 percent white. But this university does admit 12 percent of their students from foreign countries, and almost three-fourths of the school comes from out of state. Where Princeton really falls short is in economic diversity, despite the admissions process ignoring family income, most of the students come from wealthy backgrounds.

Where is Princeton University Located in New Jersey

Princeton, New Jersey is a suburban community about 50 miles from New York City. Its location is an ideal balance between forming the tight-knit college community and a close vicinity to the country’s busiest city that is full of opportunities for summer internships, weekend outings, and plenty of events and activities. The campus itself features beautiful architecture, trees and other greenery, including the ivy that gave the Ivy Leagues their name.

Princeton’s large campus has an abundance of sites with historical significance. Though it was first founded in 1746, Princeton has been its current location since 1756 – years before the Revolutionary War broke out. During the war, Princeton’s Nassau Hall served as military barracks, and held political gatherings like meetings of the Continental Congress. Some battles of the war also took place nearby. The Cannon Green, south of Nassau Hall features a cannon used in the Battle of Princeton during the American Revolutionary War.

Princeton’s grant program helps make it an affordable school in addition to being one of the best educational institutions in the country. Its long history offers some unique historic sites around the beautiful campus, which is located near enough to New York City to easily visit, but its own suburb fosters a better sense of community.