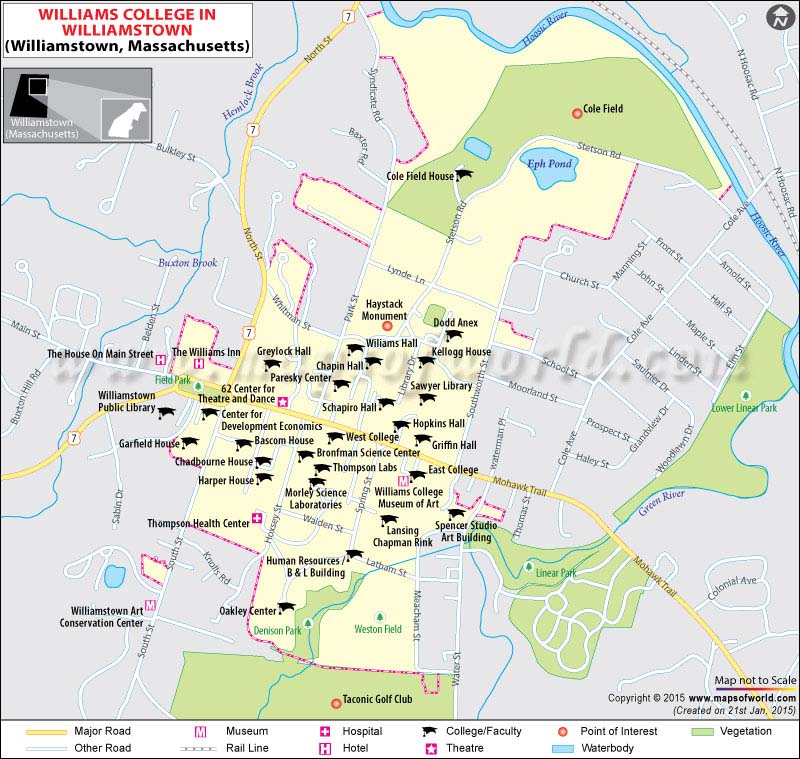 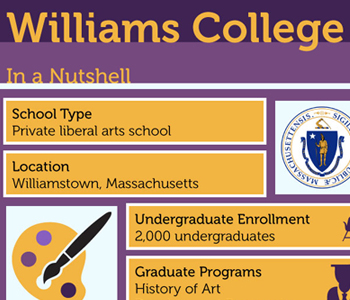 In a Nutshell
Williams College is a private liberal arts school located in the Berkshire Mountains of northwestern Massachusetts, in a city called Williamstown. Williams is a small school with an undergraduate population of just over 2,000, and a few graduate programs that focus on the history of art and development economics. Though Williams is a small university and its name is not necessarily known around the world, it has in recent years been ranked as the top university in the nation for its undergraduate program, as well as the top liberal arts school.

Established in 1793 and funded by Colonel Ephraim Williams, Williams College began as a school for men, becoming coeducational only in 1970. Today, the student population of Williams is made up of about half men and half women.

The college follows a semester system, but has an additional winter term in January, in which students take one course that is usually outside their major course of study. Some students use this term to study abroad or complete an internship. The academic year at Williams College begins in early September and ends in early June.

Williams College is considered a very selective school, admitting about 17 percent of applicants. Over half of its accepted students ranked in the top one percent of their high school class. There are three academic divisions at Williams: languages and the arts, social studies, and science and mathematics. A total of twenty-five departments are found in these divisions, with thirty-six available majors.

The student to faculty ratio at Williams is seven students to every faculty member, and the median class size is only eleven students. Most faculty members are involved in research projects, and frequently need student research assistants. In both classes and research, Williams offers a high level of collaboration between students and faculty members. Williams also promotes fieldwork in courses for experiential learning.

Economics is the most popular major at Williams College, followed by English, Psychology, Biology, Political Science, and Art.

Bang For Your Buck
At Williams College, tuition costs are about $43,000 annually, and with room and board (almost $12,000), the total comes to $54,500. Tuition can be pretty costly, however, Williams uses need-blind admissions, and will provide grants to students who are unable to afford an education at Williams. Williams provides aid to about 54 percent of its students with an average award of almost $50,000.

Most students who attend Williams College had chosen it as their top choice of university, and with the high selectivity of the admissions process and the student-faculty collaboration opportunities can make Williams worth every penny.

Social Scene
Freshmen at Williams live in on-campus dorms that they call entries. In the following years, students live in one of the four campus neighborhoods in a variety of housing options, including co-ops and historical homes. Some seniors choose to live off campus for their final year. Since before Williams became a coeducational school in 1970, it got rid of its fraternity system in around 1962.

Only about 32 percent of Williams students are minorities, though there are a variety of cultural and religious clubs available to join. Only about 7 percent of students are international, though Williams students come from a variety of backgrounds, representing almost every state and 59 countries. New York is the most represented state in the student population, followed by Massachusetts and then California.

About 36 percent of students participate in varsity intercollegiate sports, which play in the NCAA Division III. Williams offers over 160 clubs and student organizations, from sports to the arts, academic, and otherwise, there are plenty of social activities.

Where is Williams College Located

Williams is a rural college (and the first of this type on our list), and is located a few hours from Boston and New York City in the Berkshire Mountains of Massachusetts, offering a vastly different college experience and a close-knit community.

The campus is home to the Hopkins observatory, which is the oldest in the United States, as well as an impressive library collection, which contains famous items from the birth of our nation, like first printings of the Declaration of Independence and the Federalist Papers.

The host city of Williamstown has a college-town vibe, as home to another college, the Clark Art institute.

With its recent rank on the very top of the list for national universities, Williams provides a much-needed alternative for students seeking a small liberal arts college, rather than a technology school or otherwise large university. Despite its small size, Williams offers a wide variety of opportunities to its students and provides a great liberal arts education. Williams offers a rural, small college town environment to students who prefer that to big cities like New York and Boston, or even suburbs. When students need to get out of the area, these major cities are just a few hours away, and can provide an abundance of opportunities to students looking for summer jobs or internships.