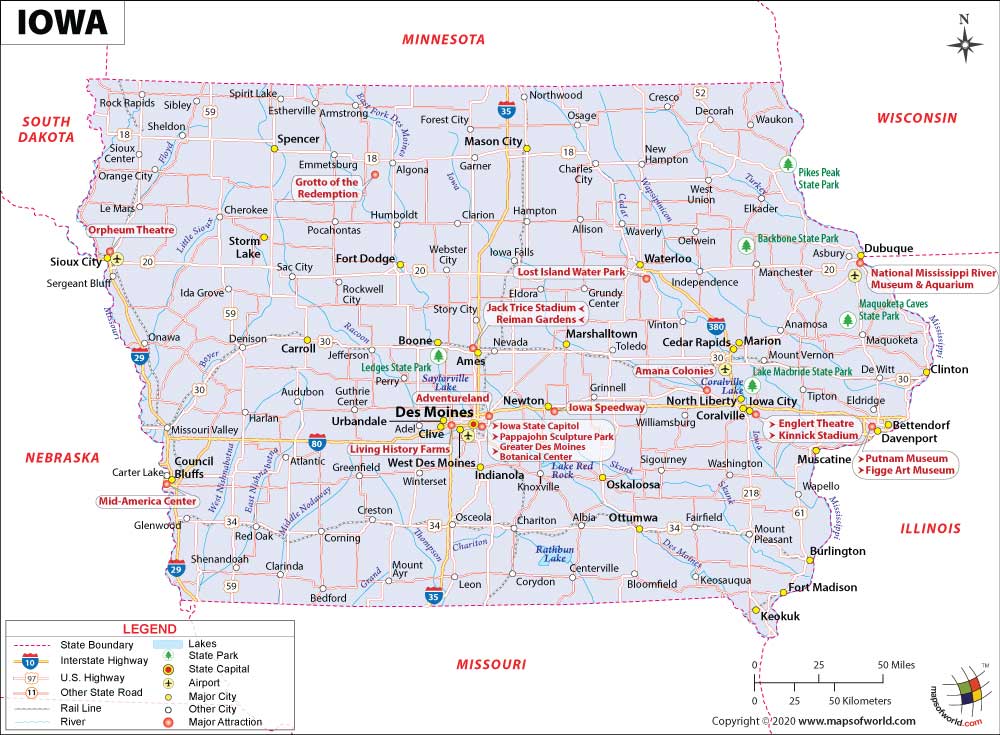 The US State of Iowa is the 29th state in the United States. On December 28, 1846, it was admitted to the Union, and Iowa achieved statehood. The State of Iowa’s nickname is Hawkeye State. Des Moines is Iowa’s capital city and the state’s largest city or metro/urban area. English is the official language of Iowa. In the US, Iowa is the 31st most populous state. Check Key Facts of Iowa to learn more about this US state.

The design of the Iowa flag includes:

The central white stripe’s width is double that of the red and blue stripes at the extreme ends on both sides.

Iowa’s official government symbol is the Great Seal of the State of Iowa. This seal has a circular shape with a diameter of two inches. Iowa’s official seal design has one inner circle and a ring.

Iowa Location Map shows the exact location of the US state of Iowa on the USA map. This map shows the boundaries of this US state, neighboring countries, and oceans.

The State of Iowa is situated in the midwestern part of the country. It is surrounded by the Mississippi River, Big Sioux River, and Missouri River from the east and west. Iowa shares its land border with:

At 1,670 feet (509 m), Hawkeye Point is the highest elevation point. The state’s lowest point is the Mississippi River, whose elevation is just 480 feet (146.3 m) above sea level. The major rivers in the state are Cedar River, Iowa River, Des Moines River, Missouri River, and Mississippi River. Lake Red Rock is a central lake.

Learn more about the location of mountain peaks, rivers, lakes, state boundaries, the state capital, neighboring states, ocean, and from this Physical Map of Iowa.

The climatic condition in Iowa is mainly humid continental. It is characterized by a hot summer season and a cold winter season.

Most of the rainfall takes place in the summers. The average yearly rainfall amount hovers around 35 inches (889 mm). While June is the wettest season, the month of January is the driest season.

September to October is the best time to visit Iowa.

The earliest historical evidence of settlement in the current Iowa region can be traced to 8,500 years ago. The earliest ancestors of Native Americans, the Paleo-Indians, were the first inhabitants of Iowa.

The first Europeans to visit Iowa were two French explorers in 1673. While one was a fur trader, Louis Joliet, the other was a Jesuit missionary, Jacques Marquette. French explorer Robert de La Salle visited this place again in 1682. As part of the Louisiana Territory, he claimed it as France’s region. Julien Dubuque established the first permanent European settlement in 1788. As part of the Louisiana Purchase, the US acquired control of Louisiana in 1803.

Iowa was included in the Missouri Territory in 1812. Black Hawk, chief of the Sauk and Fox tribe, launched the Black Hawk War in 1832 against the United States government after they were told to move to Indian Territory. However, after losing the Battle of Bad Axe, the native Americans surrendered and were eventually pushed out of Iowa.

After the native Indians were pushed out, many more people settled in Iowa, which increased the population. In 1838, the US Congress established the Territory of Iowa. On December 28, 1846, Iowa became a state and was admitted to the Union as the twenty-ninth state. In 1857, the capital city was moved from Iowa City to Des Moines.

Iowa has 99 counties. Kossuth County is the largest, and Dickinson County is the smallest county. Check the Iowa County Map to learn more about the location and boundaries of different counties in the state.

Iowa has five area codes, and they are:

The Iowa Area Codes Map will help you locate any area code you are searching for. You can also use it to learn about the area code boundary, county and state boundaries, and state capital.

Learn about Iowa’s significant places from this map of cities. You can know the exact location of the state capital, other cities, state boundaries, neighboring states and oceans, and many more. Iowa’s most prominent cities are Des Moines, Sioux City, Davenport, Cedar Rapids, and many more. Check out the Iowa Cities Map for more details.

The busiest airports in Iowa are Des Moines International Airport, Eastern Iowa Airport, Sioux Gateway Airport, and others. Explore the location of different airports in the state on the Iowa Airports Map. This map also shows Iowa’s state and country boundaries, cities, the state capital, neighboring states, and oceans.

Ans: Des Moines is the capital of Iowa.

Ans: Iowa is known for The Grotto of the Redemption, Iowa State Fair, sliced bread’s birthplace, The Hawkeye State, the world’s leading producer of corn, and many more.

Ans: Iowa’s population in 2022 is estimated to be 3.19 million, making it the thirty-first populous state in the United States.

FAQ #8: When Did Iowa Become a State?

FAQ #9: How Many Counties Are In Iowa?

Ans: There are 99 counties in Iowa.

FAQ #10: What is the Largest College in Iowa?

Ans: Iowa State University is the largest college in Iowa.