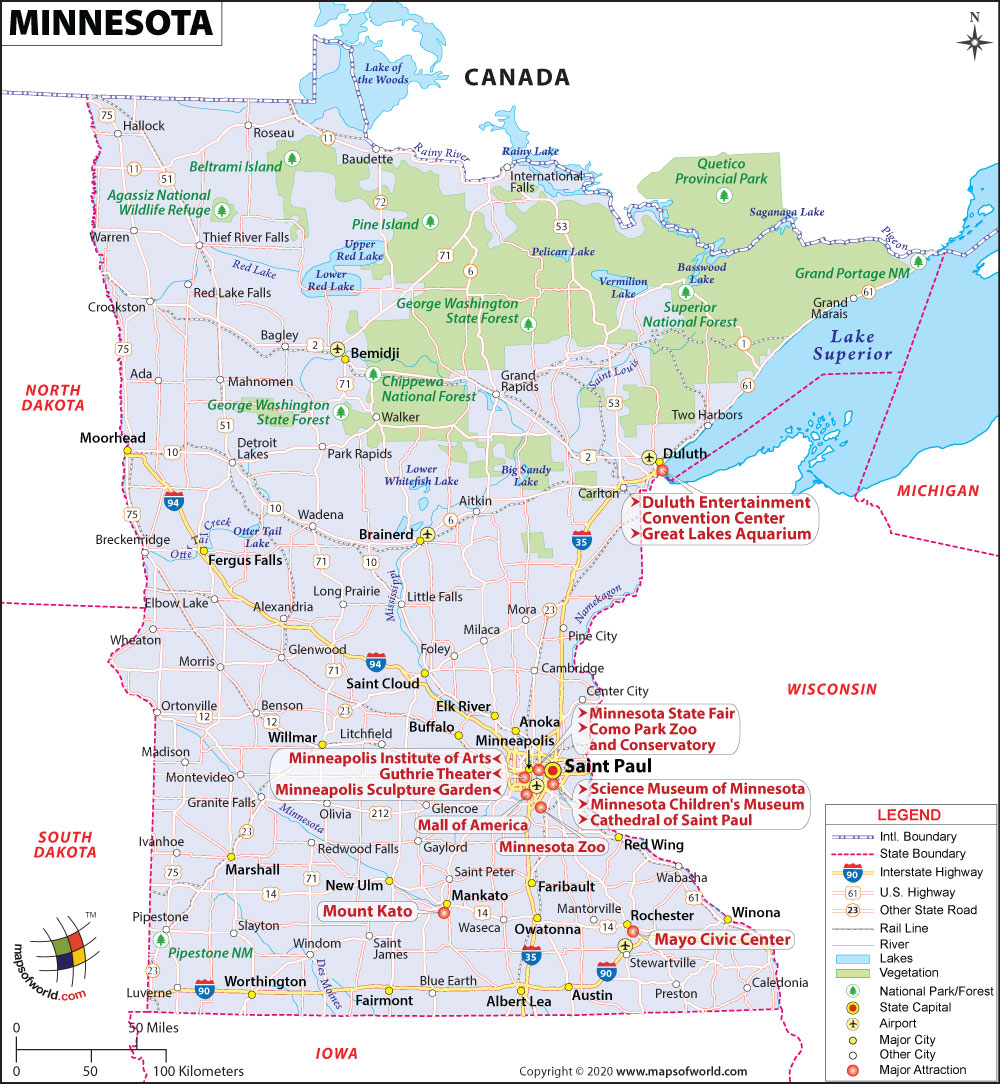 The US State of Minnesota is the 32nd state in the United States. On May 11, 1858, it was admitted to the Union, and Minnesota achieved statehood. The State of Minnesota’s nicknames is “Land of 10,000 Lakes,” “Gopher State,” and “North Star State.”

Saint Paul is Minnesota’s capital city. Minneapolis is the state’s largest city. English is the most spoken language of the state. In the US, Minnesota is the 22nd most populous state.

The 1957 legislature adopted the State of Minnesota’s current state flag. However, in 1983, the state seal’s design at the flag’s center was modified. The contemporary flag design depicts the displacement of the native Americans by the white settlers. Many people allege that the current design of Minnesota’s state flag is a racist and white supremacist. A new task force has been created during the 2021–2022 session of the Minnesota Legislature for further modification of the flag design.

The current state flag of Minnesota has a royal blue background with a gold fringe. The state seal is there at the center of the flag. Three critical dates, 1858, 1819, and 1893, are woven into the state flower’s wreath.

The word Minnesota is written at the bottom of the outer circle. Nineteen stars are placed around the inner circle of the seal. At the top, there are three stars, whose top-most star is a larger one than the rest. This more giant star symbolizes the North Star and Minnesota. The remaining sixteen stars are placed in groups of four in four different directions around the inner circle of the seal.

Minnesota’s official government symbol is the Great Seal of the State of Minnesota. The seal’s original design was based on the drawing by a St. Paul lithographer and engraver, Louis Buechner. St. Paul druggist Robert Ormsby Sweeny did a second design. Over the years, there have been many changes in the seal’s design. Minnesota’s current and modern official seal was designed based on a draft created by a state employee, Jacki Bradham. However, before statehood, the seal of Minnesota Territory was created based on a drawing done by the commanding officer at Fort Snelling, Captain Seth Eastman.

The seal’s design has two circles: An outer ring and an inner circle.

Minnesota Location Map shows the exact location of the US state of Minnesota on the USA map. This map shows the boundaries of this US state, neighboring countries, and oceans.

The State of Minnesota is situated in the upper midwestern region of the country. It shares its border with:

Various landforms of Minnesota include:

Learn more about the location of mountain peaks, rivers, lakes, state boundaries, the state capital, neighboring states, ocean, and from this Physical Map of Minnesota.

The climatic condition in Minnesota is humid continental. You’ll find four distinct seasons. While the summers remain warm and wet, the winters remain freezing, windy, and snowy. Throughout the year, it remains partly cloudy.

The average temperature in this state usually ranges from 9 °F (-12.8 °C) to 83 °F (28.3 °C). Mid-June to early September is the best time to visit Minnesota because it remains warm during this time of the year. The southeast part of Minnesota gets more rainfall than the northwest region. While southeast Minnesota receives 35 inches (889 mm), northwest receives 19 inches (483 mm) of average yearly rain.

The average annual snowfall level ranges from 70 inches (1,778 mm) in Lake Superior’s northern highlands to 40 inches (1,016 mm) in the southern and western parts of the state.

Europeans arrived here in the 1600s. Medard des Groseilleirs and Pierre Radisson, two French explorers, were the first Europeans to visit this place. They mapped Lake Superior’s coast and claimed it as France’s land. In 1671, they traded fur with the Ojibwa people here. A peace agreement was negotiated between the Dakota and Ojibwa tribes by French trader Daniel Grayson, Sieur Du Luth, in 1679.

In 1763, the French and Indian war ended, and the British took over the reins of Minnesota’s eastern part from the French. After the Revolutionary War, the United States took the territory from the British. Under the Louisiana Purchase, the rest of Minnesota was bought from France.

Explorer Zebulon Pike was sent by United States President Thomas Jefferson to learn more about the vast land area. In 1805, Pike arrived in Minnesota. He signed a treaty with the Dakota Indians for land in the area. Another US explorer Henry Schoolcraft took help from the Ojibwa people to find the source of the Mississippi River in 1832. Henry called the Mississippi River’s source Lake Itasca.

In 1825, Fort Snelling was completed. It was the first significant outpost of the United States in Minnesota. This outpost was created at the meeting point of the Mississippi River and the Minnesota River. Eventually, Minneapolis and St. Paul (two significant cities) came up on both sides of the Mississippi River. Both these cities are also called the Twin Cities. In Minnesota, St. Paul and Minneapolis are also the most significant cities.

Minnesota became a United States territory in 1849 and ultimately the thirty-second state of the Union on May 11, 1858.

Minnesota has 87 counties. Saint Louis County is the largest, and Ramsey County is the smallest. Check the Minnesota County Map to learn more about the location and boundaries of different counties in the state.

The area codes in Minnesota are:

The Minnesota Area Codes Map will help you locate any area code you are searching for. You can also use it to learn about the area code boundary, county and state boundaries, and state capital.

Learn about Minnesota’s significant places from this map of cities. You can know the exact location of the state capital, other cities, state boundaries, neighboring states and oceans, and many more. Minnesota’s most prominent cities are Minneapolis, St. Paul, Brooklyn Park, Bloomington, Rochester, and many more. Check out the Minnesota Cities Map for more details.

Check out the National Parks in Minnesota Map to get a clear idea about the locations of different national parks, monuments, preserves, etc.

FAQ #1: What Time Zone Is Minnesota?

FAQ #2: What Is The Capital Of Minnesota?

Ans: Saint Paul is the capital of Minnesota.

FAQ #3: What Is Minnesota Known For?

Ans: Minnesota is known for over ten thousand lakes (11,842 lakes are estimated to be there), the presence of major companies (including Target, Land O’Lakes, General Mills, UnitedHealth Group, 3M, etc.), snowmobiling, availability of significant fishing spots in the USA, popular tourist destinations like Port of Duluth, the largest mall in the USA (Mall of America), Boundary Waters Canoe Area Wilderness, and others.

FAQ #4: Does It Snow In Minnesota?

Ans: Yes, snowfall takes place in Minnesota. The average snowfall level ranges from 70 inches (1,778 mm) in Lake Superior’s northern highlands to 40 inches (1,016 mm) in the southern and western parts of the state.

FAQ #5: Who Is The Governor Of Minnesota?

FAQ #6: What Is The Population Of Minnesota?

Ans: Minnesota’s population in 2022 is estimated to be 5.7 million, making it the twenty-second populous state in the United States.

FAQ #7: What Is The State Bird Of Minnesota?

FAQ #8: When Did Minnesota Become A State?

FAQ #9: How Many Counties Are In Minnesota?

Ans: There are 87 counties in Minnesota.

FAQ #10: What is the Largest College in Minnesota?

Ans: The University of Minnesota, Twin Cities, is the largest college in Minnesota.