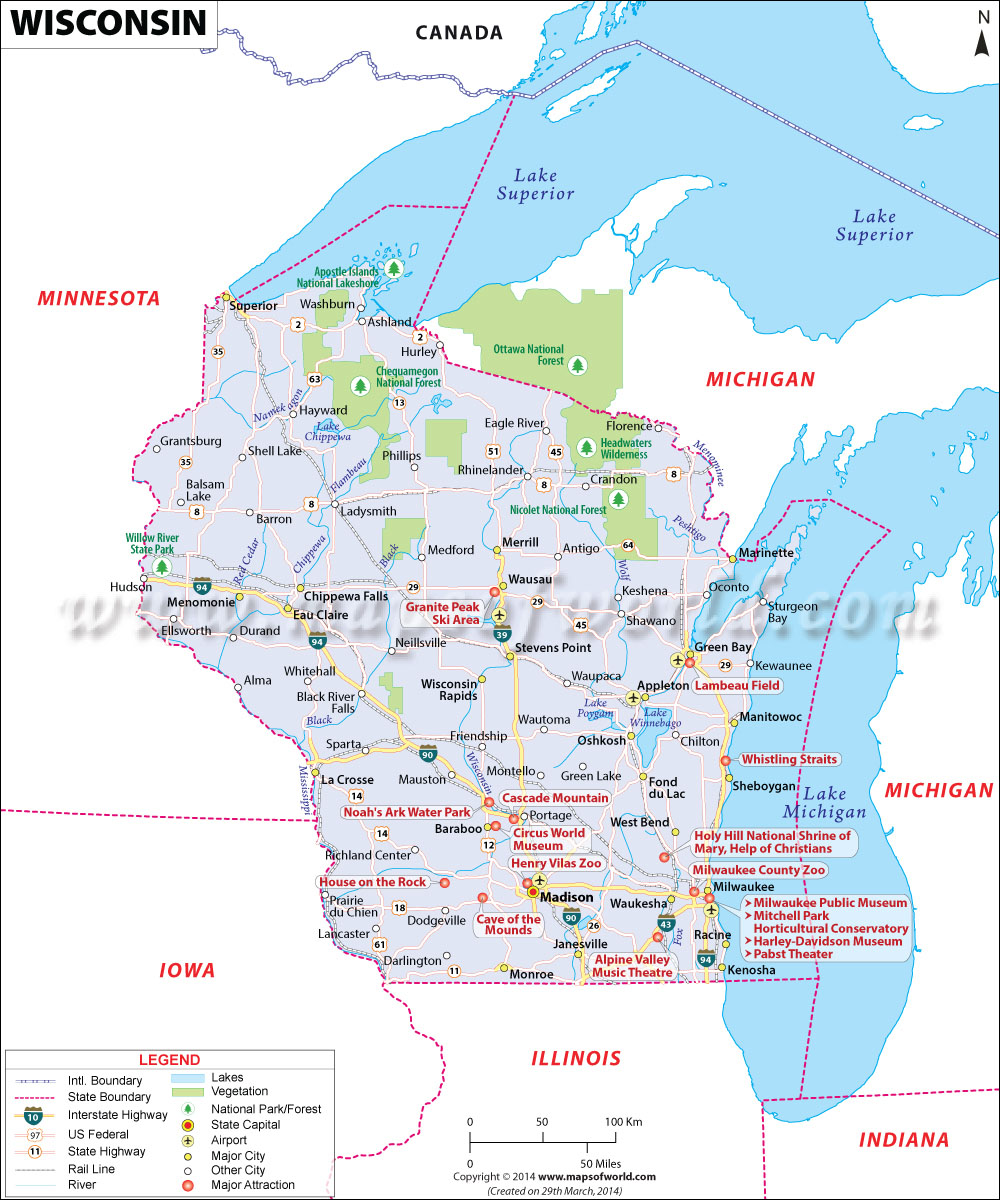 Wisconsin was initially dominated by a group of Indian tribes way back in the 17th century. The group comprised the Kickapoo, the Algonquian speaking Menominee, the Siouan speaking Winnebago, Iowa, and the Sioux.

The first known explorer to make an entry into the land of Wisconsin happened to be a native of France by the name of Jean Nicolet. He was apparently on a mission to search for a Northwest Passage to China.

He was canoeing towards the west from the Georgian Bay via the Great Lakes in the year 1634. It is believed Jean Nicolet landed near the Green Bay at Red Banks. It was followed by the arrival of Medard des Groseilliers and Pierre Radisson into Green Bay and Chequamegon Bay during (1654-66) and (1659-60) respectively and when the fur trade with the local American Indians began. During the French and Indian War in 1763, the French lost their control over Wisconsin to Great Britain.

Wisconsin was under the possession of Britain until the year 1783 when Britain signed the Treaty of Paris, and the control of the state was transferred to the United States. However, the American establishment became apparent after the War of 1812 between the British and the US and Wisconsin’s economy expanded as it went on to replace fur trading with lead mining.

Due to the boom in lead mining in southwest Wisconsin and northwest Illinois, glimpses of the American settlers could be discerned in Wisconsin around the 1820s. The availability of easy mineral wealth led to the influx of immigrants from all over the US and even Europe. Miners sought shelter in self-made holes, which earned them the nickname “badgers.” This led to Wisconsin’s nickname “Badger State.” The inflow of white settlers and miners in the Midwest led to tension when the federal government along with the new settlers attempted to remove the Local Americans from their native lands. The American Indians were forcefully and eventually removed following the Winnebago War in 1827 and the Black Hawk War in 1832.

The absence of any kind of obstruction from the Native Americans led to the arrival of fresh settlers in Wisconsin, which subsequently led to the formation of the Wisconsin Territory in the year 1836. The year 1840 saw the entry of more settlers into Wisconsin. On 29 May 1848, it assumed statehood and became the 30th state of the United States.

On May 29, 1848, the US state of Wisconsin was created from Wisconsin Territory. It initially had 28 counties. Now, Wisconsin has a total of 72 counties. Check this Wisconsin County Map for locating all counties of Wisconsin on the map.

Bordered by Minnesota and Michigan on the north, Illinois on the south, Lake Michigan on the east, and Minnesota and Iowa on the west, Wisconsin is spread throughout a total area of 65,503 square miles. This makes it the 23rd largest state in the US. The state of Wisconsin is divided into five geographical regions; the Lake Superior Lowland, the Northern Highland, the Eastern Ridges and Lowlands, the Central Plain, and the Western Upland. It is famous for its many physiographic features such as the lakes, woodlands, mountains, and rivers.

The highest point in the state is Timms Hill, which stands at 1,951 feet above sea level and lies in the Northern Highland. The lowest point is Lake Michigan at 581 feet above sea level. The Northern Highland is also comprised of coniferous and hardwood forests and a large variety of glacial lakes. Unique sandstone formations along with lush farmland form the core attraction of the Central Plain. The Eastern Ridges and Lowlands are home to the Niagara Escarpment, the Magnesian Escarpment and the Black River Escarpment and some of Wisconsin’s leading cities. The Western Upland is a blend of forests and farmlands.

While the major rivers of the state are the Wisconsin River, the Mississippi River, and the St. Croix River, the major lakes are Lake Michigan, Lake Superior, and the Lake Winnebago. The highest recorded temperature in the state was 114 degrees Fahrenheit on 13 July 1936 in Wisconsin Dells. The lowest recorded temperature was –55 degrees Fahrenheit in the Couderay village.

Wisconsin is blessed with some amazing destinations and a wide variety of outdoor activities such as boating, skiing, hiking, etc. set against the beautiful natural backdrop of the state. According to the department of tourism, Wisconsin ranks third on the list of tourism industries in the US. Some of the top tourist places of note are:

Wisconsin is ideal for all sports, museums, wine and beer lovers, foodies, etc. In short, it has something special for every traveller.