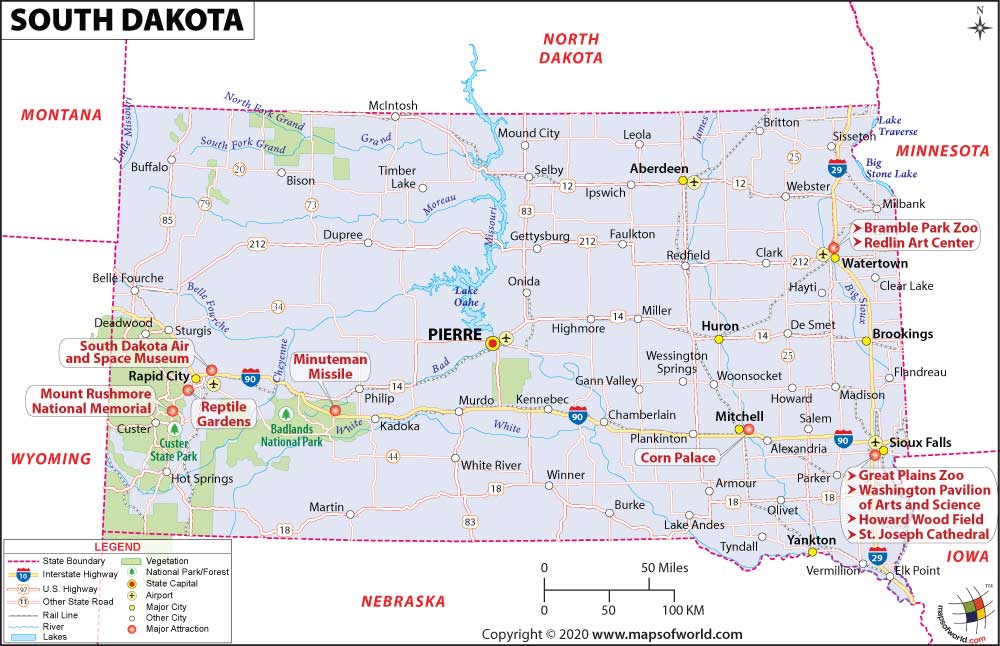 South Dakota is a Midwestern US state known for rolling prairies and Black Hills National Forest. The map depicts this expansive state and the cities in it.

The official flag of South Dakota was adopted on 9th November 1992. It consists of a seal of the state at the centre of the flag that has a sky blue background.

About Map of South Dakota

The map of South Dakota provides the users with a clear idea about the exact location of the prominent landmarks of the state. Clearly listed on the map are the important airports, rail services, tourist places, educational institutes, museums, resorts, national parks and other important destinations. The map is a useful guide for travellers, teachers, students and researchers.

South Dakota is situated in the Midwestern region of the country. It is the 17th most extensive state in the United States. As of 2015, there were 858,469 people living in the state, making it the 46th most populous in the country. Pierre is the Capital of South Dakota, while Sioux Falls is its largest city. Also known by its nickname of The South Rushmore State, South Dakota is made up of 66 counties.

Prior to the advent of the Europeans in the 18th century, the region was inhabited by native Indian tribes. The LaVerendrye group, who were French Canadian fur traders and explorers, claimed the area for France in 1743. The area was claimed as a part of the Greater Louisiana; however, in 1762 the area passed into Spanish hands and became a part of Spanish Louisiana and remained so until 1802. The next year, in 1803, the Louisiana Territory was purchased by the United States from Napoleon Bonaparte. According to the 1858 Treaty which was signed by the Yankton Sioux in 1858, a major part of the current eastern Dakota was handed over to the US. The government of the United States formed the Dakota Territory in 1861. On November 2, 1889, Dakota Territory was split into two and on the same day, the two new states of North Dakota and South Dakota were admitted to the Union.

Covering an area of 78,116 square miles, South Dakota is divided into three regions which are: the Black Hills, eastern South Dakota, and western South Dakota. The state shares its borders with North Dakota, Montana, Iowa, Wyoming, Minnesota, and Nebraska. Black Elk Peak, which has a height of 2,200 feet, is the highest point in the state. Some important rivers of the state are the Missouri River, which is the largest as well as the longest in the state, Big Sioux, Cheyenne, White Rivers, and James. Apart from the Black Elk Peak, some other important mountains of the state are Bear Mountain, Thunder Butte, Terry Peak, and Iron Mountain, among others. Animals found in the state include bison, deer, and prairie dogs to name a few. The ring-necked pheasant is the state bird. Paddlefish can also be found in the Missouri River.

In 1862 when South Dakota was organized as Dakota Territory, it had initially ten counties. Now in present, the US state of South Dakota has 66 counties. Check this South Dakota County Map which provides the location of all counties.

Mount Rushmore National Monument is prominent tourist attraction. What makes it unique is the faces of George Washington, Abraham Lincoln, Thomas Jefferson, and Theodore Roosevelt that have been carved into the side of the mountain. Badlands national park provides a glimpse into the exotic flora and fauna of the state. Visit this amazing Mammoth Site and look at the bones of the extinct animal. The National Music Museum & Center for Study of the History of Musical Instruments comprises musical instruments from around the world. Other places worth visiting are Old Courthouse Museum, Sertoma Butterfly House and Marine Cove, Pettigrew Home and Museum – Sioux Falls, and Spearfish Canyon to name a few.