US States Map > Map of Missouri 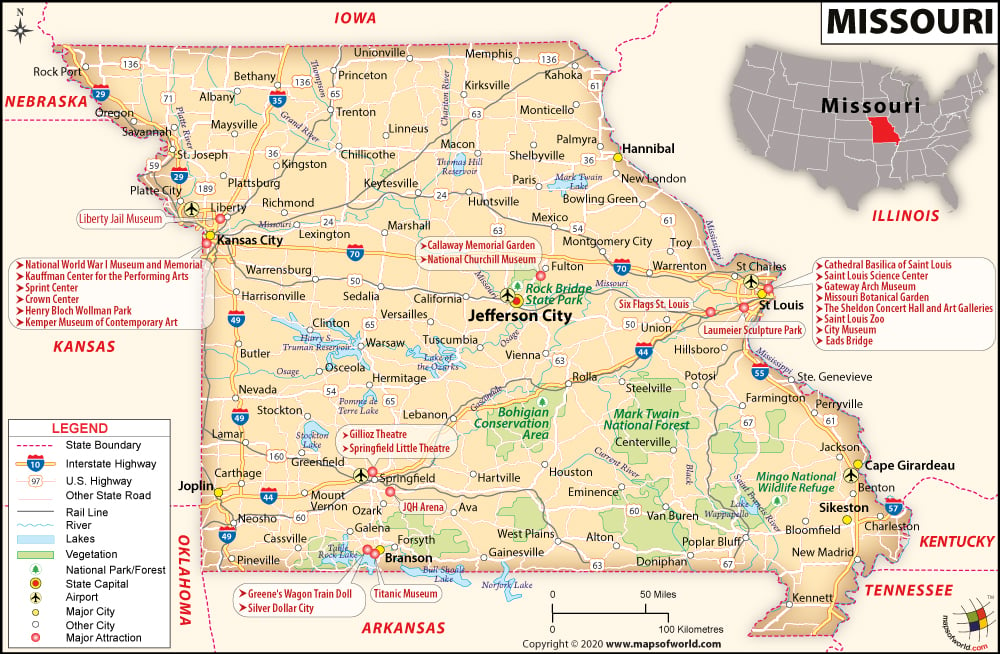 Explore this Map of Missouri to know everything you want to know. Learn about the location of this state in the United States of America. Check out its geography, time zones, history, major cities, national parks, trails, flag, capital, and many more.

Missouri is the 24th state of the United States, which was admitted to the Union on August 10, 1821. Jefferson City is Missouri’s capital city. While Kansas City is the largest city in Missouri, Greater St. Louis is the largest metro and urban area.

English and Spanish are the major spoken languages. In the US, Missouri is the 19th most populous state. Mother of the West, Show Me State, and Cave State are some of its nicknames. “Salus Populi suprema lex esto (Latin)” is the State Motto. It means “Let the good of the people be the supreme law.” Learn more about this US state from Facts of Missouri.

This flag has a 7:12 proportion. The arms of Missouri are placed at the center of the flag, which overlaps all the three horizontal stripes. On March 22, 1913, the state flag of Missouri was established. It was officially adopted when the State flag act was signed by the then-governor Elliot Woolfolk Major.

A blue band of 24 five-pointed stars of white color encircles the seal of Missouri at the center of the flag. These stars symbolize the admission of Missouri to the Union as the 24th state. “Salus Populi Suprema Lex Esto” (which means Let the welfare of the people be the supreme law) is written on a scroll below the image.

The design of the state seal of Missouri consists of:

Jefferson City’s Robert Wells designed the Great Seal of Missouri. It was adopted on January 22, 1822.

A wide array of indigenous people used to live in Missouri from around 9000 BCE till the European people arrived. The Mississippian culture was the most prominent one. The ancient Clovis and Folsom culture complexes and the Cahokia burial mounds are some of the ancient sites.

Missouri attained statehood in 1821. The government forced the entire native population to relocate to the west, especially to Oklahoma, through the torturous Trail of Tears. In the early 20th century, Missouri was predominantly rural, and agriculture was the primary economic resource. However, the 1930’s Great Depression, followed by World War 2, brought a paradigm shift. The manufacturing sector started to replace the dominance of agriculture and mining.

Missouri Location Map shows the exact location of the US state of Missouri on the US map. It also shows the boundaries of states in the US, neighboring countries, and oceans.

The state of Missouri is situated in the midwestern region of the US. It shares its border with eight other US states. Missouri is bordered by:

The geographical area of Missouri has three predominant features:

Missouri is a large producer of mined lead and lime. Learn about the location of mountain peaks, rivers, lakes, the state capital, state boundary, ocean, and neighboring states from this Physical Map of Missouri.

Missouri cities map helps you learn about the state’s major cities and locations. It also showcases the state capital, state boundary, other cities, neighboring states and oceans, and many more.

Some of Missouri’s largest and major cities are Kansas City, Independence, Columbia, Springfield, St. Louis, and many more. Check out the Missouri Cities Map for more details.

In Missouri, you’ll find a continental-type climate. Strong seasonality is found in the state.

FAQ #1: What Is The Time Zone For Missouri?

Ans: Missouri is situated in the midwestern region of the USA.

FAQ #3: What Is The Capital Of Missouri?

Ans: Jefferson City is the capital city of Missouri.

FAQ #4: What Is Missouri Known For? What To Do In Missouri?

FAQ #5: Was Missouri A Slave State?

Ans: Yes, in 1821, Missouri was a slave state. It was done in accordance with 1820’s Missouri Compromise. However, on January 11, 1865, an ordinance was passed to abolish slavery in Missouri.

FAQ #6: What Planting Zone Is Missouri?

Ans: In accordance with the average extreme winter low temperatures, the state of Missouri is divided into 4 planting zones. They are 7a (towards the south), 6a and 6b (in the central regions), and 5b (in the north).

FAQ #7: Why Is Missouri The Show-Me State?

FAQ #8: How Many People Live In Missouri?

FAQ #9: What Is The State Bird Of Missouri?

Ans: Yes, black bears are found in Missouri. There are around 580 to 840 black bears in the state, and their population is growing at an average rate of 9%.