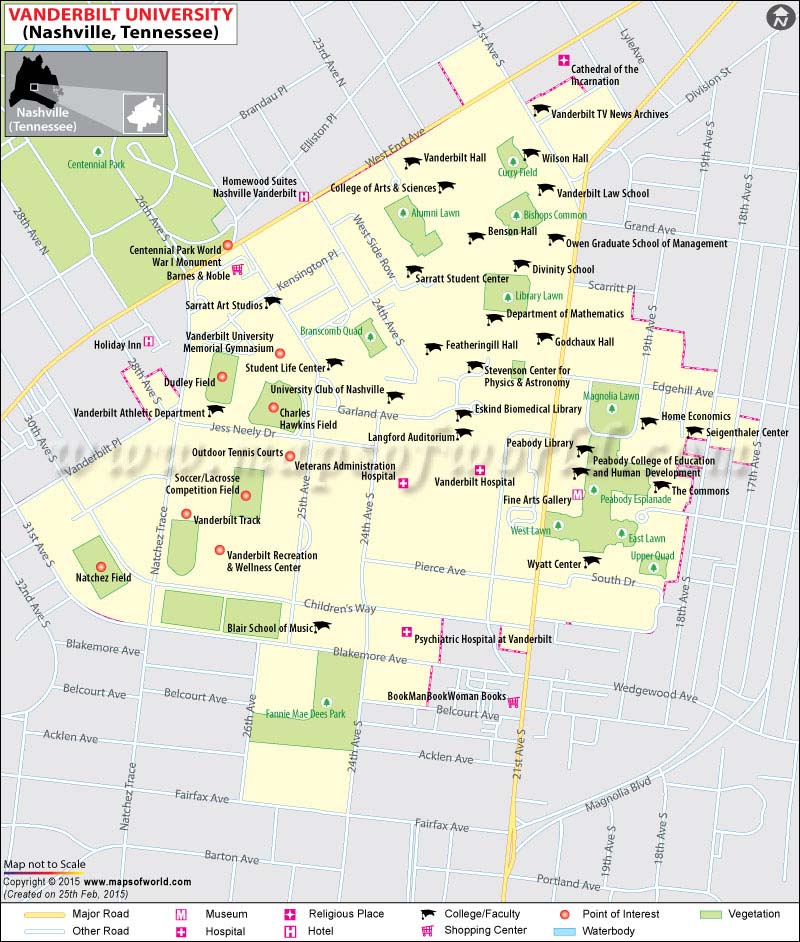 About Vanderbilt University in Nashville

In a Nutshell
Vanderbilt University is a private institute if higher education that is located in Nashville, Tennessee, and is considered one of the top universities in the region. A strong emphasis on research and undergraduate studies makes Vanderbilt a great option for higher education. Vanderbilt is a medium-sized university, with undergraduate enrollment at around 6,796, while its graduate and professional schools enroll about 5,949, for a total of 12,745 students.

Founded in 1873 with an endowment from Commodore Cornelius Vanderbilt, for whom the university is named, at the urging of Methodist bishop, Holland McTyeire, who became a friend of Vanderbilt. Vanderbilt had a great appreciation for education, especially since he had never been educated himself, and donated a large sum of money to open this institute in Nashville, which had never even visited.

The university’s charter was issued to McTyeire in 1872, and amended after receiving the funds from Vanderbilt to officially call the school Vanderbilt University. Vanderbilt opened its undergraduate college for liberal arts and sciences, as well as seven professional schools, and its first classes started in the autumn of 1875. Vanderbilt was associated with the Methodist Church until 1914, when the church ended its relationship with the university.

The university continued to expand over its history, and though it might have been intended to educate only men, no rules stated this, and at least one women has attended Vanderbilt during every year of its existence. In 1966, Vanderbilt’s Divinity School joined with Oberlin Theology school, and then in 1979, Vanderbilt and George Peabody College for Teachers also merged.

Vanderbilt is a prestigious university, and is sometimes called a Southern Ivy. With an acceptance rate of 14.2 percent, Vanderbilt is a selective university with students from the tops of their high school class. A student to faculty ratio of eight students to every faculty member means class sizes at Vanderbilt are typically small.

Vanderbilt has ten schools, four of which have undergraduate programs. There are more than sixty-five majors offered at Vanderbilt University. The undergraduate schools are the College of Arts and Sciences, Blair School of Music, the School of Engineering and Peabody College, which is the education school. Some of these schools also offer graduate programs. The graduate and professional schools at Vanderbilt are the Divinity School, Law School, School of Medicine, School of Nursing, Owen School of Management, and the Graduate school.

Vanderbilt’s Jean and Alexander Heard Library is one of of the top research libraries in the country with over three million volumes. Vanderbilt has been ranked twentieth in the nation in terms of federal research and development funding.

Bang For Your Buck
Undergraduate tuition at Vanderbilt is $41,088, with room and board costs totaling around $9,028. These costs combined with other fees for books and other supplies come to an estimated total cost of $62,746 annually. Around 60 percent of undergraduate students receive financial aid, and the average aid package for freshmen is $43,794. A number of financial assistance options are available, including grants, work study, and scholarships.

Vanderbilt has a need-blind admissions process with a pledge to meet 100 percent of student need. Undergraduate aid at Vanderbilt only includes grants and limited expectations for student jobs. Vanderbilt also offers merit-based scholarship, some of which cover the costs of four years of attending Vanderbilt. For these reasons, Vanderbilt has been rated among the top schools in terms of best value.

Social Scene
Vanderbilt students typically live on the university’s campus, which is located between numerous thriving neighborhoods with much to offer students. About 86 percent of undergraduate students live on campus in the 29 residence halls and apartments, which are organized into quads around campus. Ten of these residence halls are reserved for freshmen, and are called the Martha Rivers Ingram Commons. The commons help connect freshmen to the Vanderbilt community, and encourage interaction between students and faculty.

Greek life is active at Vanderbilt, with sixteen fraternity houses and eleven sorority houses on campus, which are another option for upperclassmen housing. Vanderbilt has more than 460 student organizations on campus, over sixty student service groups, and sixty cultural and religious groups. An annual music festival takes place on campus called Rites of Spring, which brings in some of the biggest names in music, from all different styles.

Vanderbilt competes in the Southeastern Conference, in the Eastern Division, and has ten women’s and six men’s varsity teams. Vanderbilt specializes especially in men’s basketball and football, and women’s basketball. In addition to their intercollegiate teams, there are about forty options for both club and intramural sports at Vanderbilt.

Where is Vanderbilt University Located

One of Vanderbilt’s greatest attributes is its location in the heart of Nashville. While Vanderbilt has an urban setting, at just over a mile from downtown Nashville, it offers so many trees and vegetation that it has earned the distinction of becoming a national arboretum, in addition to many nearby public parks and areas for outdoor recreation.

Nashville has earned a legendary status as Music City, USA, for its abundance of musicians and live music performances that can be found any day of the week downtown. Contrary to popular belief, the live music scene in Nashville is not limited to country, though there are plenty of opportunities to hear country, bluegrass, and blues.

As the capital of Tennessee, Nashville is a fairly large city with a small town feel, and offers great restaurants, eclectic shops, and plenty of entertainment.

Vanderbilt is a highly rated, prestigious university in the South that offers great academic programs for undergraduates and graduates alike. Vanderbilt’s law school, medical center and medical and nursing schools are some of the top in the country, while Peabody College of Education and Human Development is ranked at the top of the list for graduate schools for education. The academic excellence paired with the lively location and beautiful setting make Vanderbilt a top university and a great option for students.