Map of Russia and Ukraine 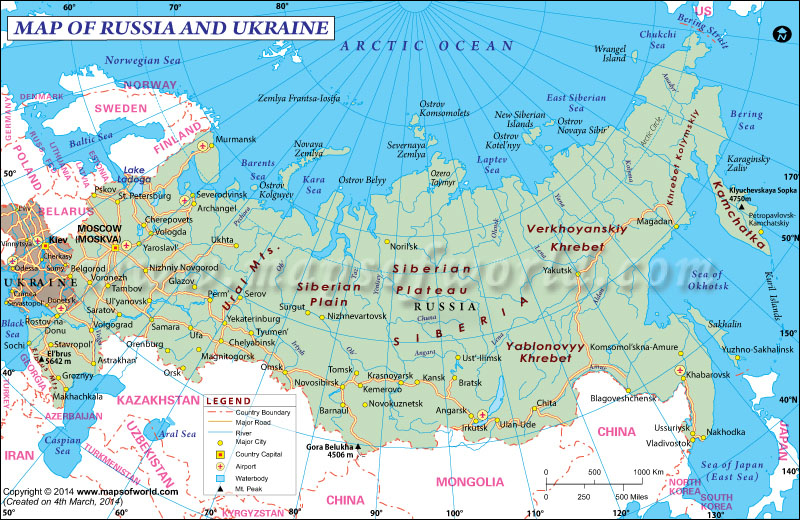 
Ukraine Crisis: Crimea, the center stage in the Ukraine-Russia conflict
Crimea, a small peninsula in the Black Sea coast, is the bone of contention – the center of attention in the ongoing conflict in Ukraine. The region has a majority of ethnic Russians or Russian speaking people, totaling nearly 2.3 million. The Crisis of 2014 began with the Ukrainian Revolution that witnessed violent protests, for the ousting of Ukrainian President, Viktor Yanukovych and overthrow of the government.

Russians in Crimea had begun to publicly support Russia rather than Ukraine, demanding to be separated from Ukraine. They were hoisting Russian flags, plastering them over important buildings in the city, and showing allegiance to Russia. This call for separatism, was leading to bombings in several cities of Ukraine. To maintain control, “Anti-terrorist operation” was conducted by Ukraine's government to stamp down the separatists. This emerged as a war in Donbass region of Ukraine, between the government forces and pro-Russia separatists.

Pro-Russia militia were part of the Russian armed forces, and had taken over the airports Sevastopol and Simferopol in Crimea. The Ukrainian interior minister in charge of home affairs accused Russian naval forces stationed in the Black Sea of aiding these militia men. The situation deteriorated and led to reports that Russian helicopters made their landfall at Crimea. The Crimean peninsula was hence annexed by the Russian Federation by the month of March 2014, and confirmed by the Russian President Vladimir Putin.


However, after the annexation, 3,000 people escaped from Crimea, and most of them were the Crimean Tartars. The number of refugees who dispalced from Crimea continued to rise, and as per the UNHCR, 10,000 people were displaced by May 20, 2014.

The annexation was condemned internationally. The UN General Assembly rejected the vote for it, and affirmed “integrity of the Ukraine.” In 2016, they reaffirmed non-renegotiation regarding the annexation. But, surveys of 2017 suggested that Crimea had fully integrated with Russia, and barely any links to Ukraine existed.

Once again, in November of 2018, Ukraine Parliament backed the enforcement of martial law around the coastal regions of Ukraine, due to the Kerch Strait incident. On November 25, Russian FSB coast guard fired on the Ukrainian navy vassals that were passing from the Black Sea into the Sea of Azov through the Kerch Strait. A 2003 treaty had stated that Kerch Strait and Azov Sea shared the waters and were accessible to both the countries. Hence, the firing that injured 6 Ukrainian crew members, and the detaining of 24 Ukrainian sailors, along with ships, only a few days before 2018 G20 summit was intensely criticized and visualized as a part of the Russian invasion.

International sanctions that were imposed by the European Union and the United States, against Russia and Crimea continue to be in effect as of 2018. It was announced by the EU that these sanctions will be extended up to February 2019. These sanctions have contributed to the decline in economy of Russia and the Russian Financial Crisis.