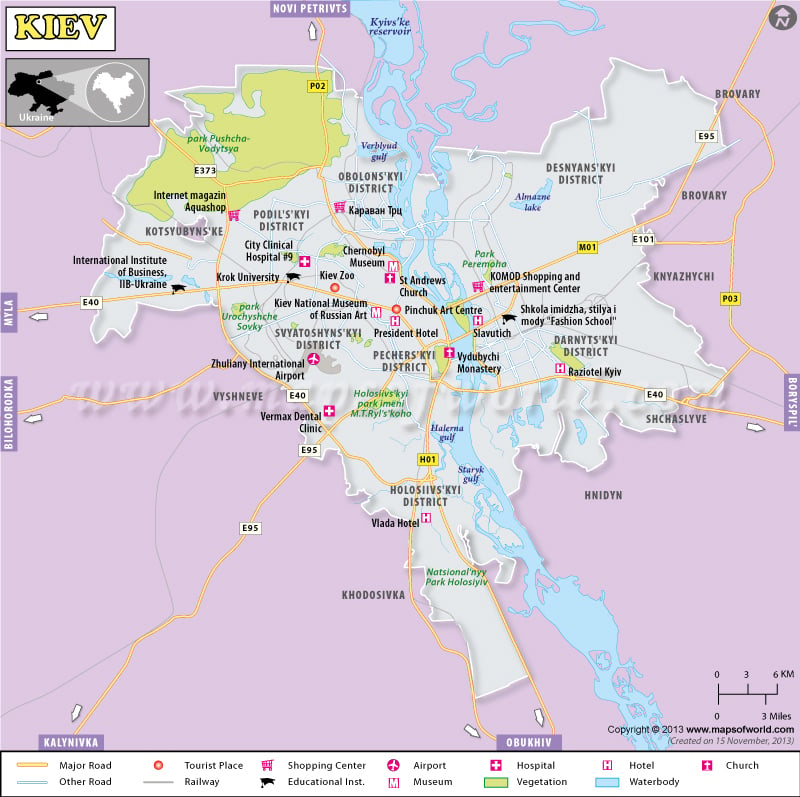 Kiev or Kyiv is the capital city of Ukraine. With an approximate population of 2,847,200, it is also the largest city of the country and the eighth largest amongst the cities of Europe. The city is a significant scientific, industrial, cultural, and educational hub of Eastern Europe. It also houses several higher education centers, high-tech companies, as well as renowned historical landmarks. Kiev is one of the oldest cities of Eastern Europe and was declared a commercial hub in the early 5th century.

Kiev is categorized under the Polesia ecological zone. However, its unique landscape sets it apart from the neighboring area. The city is located on both sides of the River Dnieper. The older right bank of the river is dotted with various woody hills, small rivers, and ravines. On an average, there are 448 open water bodies surrounding the city. These water bodies occupy nearly 7,949 hectares of the overall territory. Besides, the city is also home to 16 beaches and 35 near-water recreational regions covering 140 hectares and 1,000 hectares, respectively. As per the UN 2011 evaluation, the city and its metropolitan region are free from the risks of natural disasters.

The city enjoys a humid continental climate. June, July, and August are the warmest months of the year where the temperature can rise up to 24.8°C. The coldest months include February, January, and December where the temperature can drop down to −32.2°C. You could experience heavy snowfall from mid-November to the end of March. The summers are usually damp and hot while the winters are chilly.

The best time to visit Kiev is in July and August. On the other hand, if you can tolerate the chilled winds of the winters, then you can plan your visit from May to September as well.

On your tour to Kiev, some of the must visit destinations include :

When it’s the holiday season, most people don’t mind planning for a lavish stay. Some such options include the 11 Mirrors Design Hotel, Hyatt Regency Kiev, Fairmont Grand Hotel Kyiv, InterContinental Kiev, Premier Palace Hotel, Opera Hotel, and Hilton Kiev. On the other hand, if you are running on a tight budget on your tour to Kiev, then look for options like Hotel LaMa, Raziotel Kyiv, Kooperator, Kropivnickogo or the Saturn Hotel.