The map of Western Europe shows the countries that are located in the western part of Europe. The Western European countries include Austria, Belgium, France, Germany, Liechtenstein, Luxemburg, Monaco, Netherlands, Switzerland. 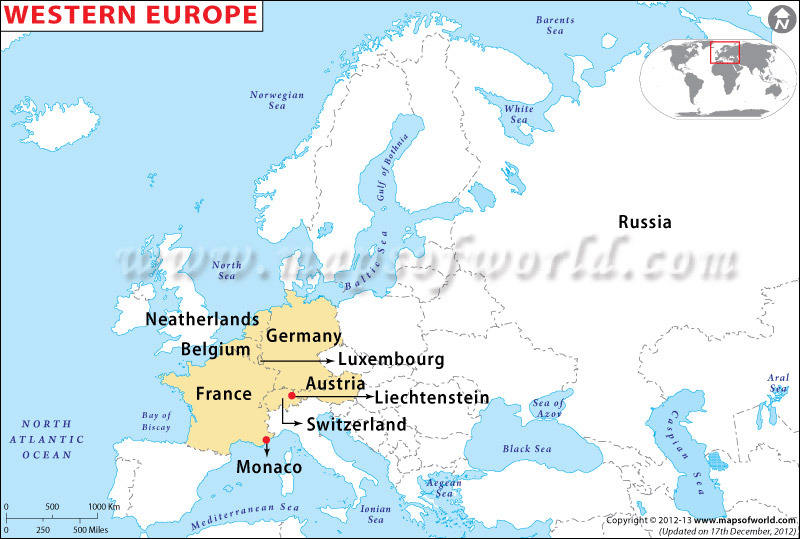 The 'number of Western European countries is a loosely defined term and hence, there is no fixed number of countries when one says, or writes 'Western European Countries'. However, mapsofworld.com has made an effort to publish Western Europe Map online with accurate details. For this, it has chosen two most reliable and authentic sources, which are:

The countries that are situated in the western part of Europe are shown in brown color on the Map of Western Europe.

Western Europe is a hub of education and comprises some of the world's best educational institutes. Some of the universities that attract students from all over the world are Oxford and Cambridge Universities in the United Kingdom, University of Heidelberg and Berlin University in Germany, Paris University in France, and many others.

Western Europe is also home to many popular tourist attractions. Some of the attractions that draw tourists from all over the world are Eiffel Tower in France, Natural History Museum and London Eye in the United Kingdom, Galleria Vittorio Emanuele shopping centre, Venice Carnival, and the historic city of Rome in Italy, and of course, the sizzling and tantalizing country Switzerland.