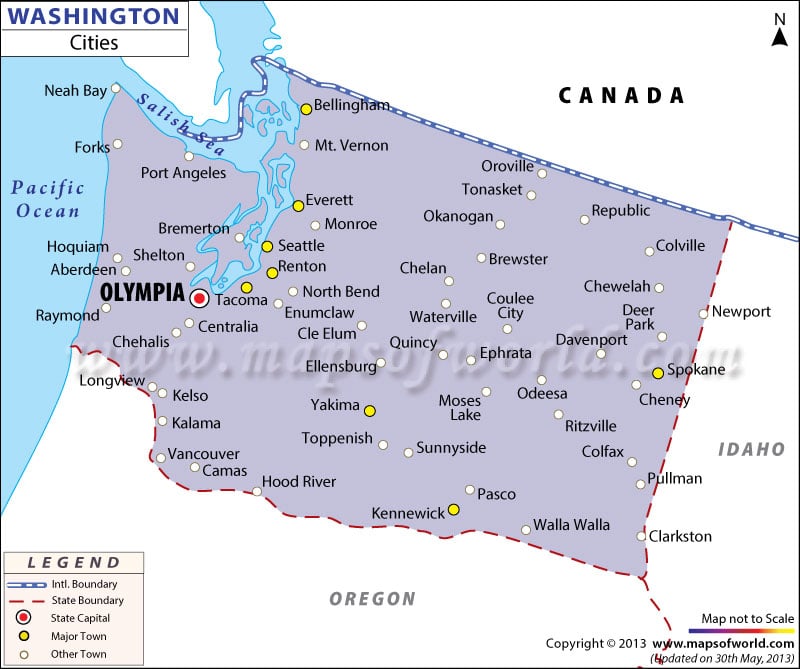 Amicable marine climate, the abundance of the rainforest canopy, the tempting shoreline of the Pacific, and unequalled recreational dwellings put Washington State in a class apart. Ranked 18th largest by area and 13th largest by population, the state is nicknamed ‘The Evergreen State.’

Tucked between Puget Sound and Lake Washington, Seattle is the state’s largest city and almost 60 per cent of Washingtonians reside within its metropolitan area. Tacoma, just south of Seattle, is a mid-sized port city famous for attractions such as ‎Point Defiance Park and the Museum of Glass. It also acts as a gateway to Mount Rainier−tallest peak in the state. The city of Olympia − which is not in the top 10 most populated cities − in the state capital. Being a sports-loving city, Everett houses the largest building in the world of Boeing’s assembly factory.

Bellevue is the biggest suburb of Seattle and Vancouver, yes there is one in Washington as well, is one of the oldest cities in the region. About 280 miles east of Seattle towards the Idaho border, Spokane is the second-largest city. It is known for being the birthplace of Bing Crosby and David Lynch and its architectural wealth.

Go for a treasure hunt in Pike Place Market, sample your way through Woodinville wine country, and board a ferry to The San Juan Islands. Hiking, biking, fishing, climbing, and camping abound in North Cascades National Park. Beachcombing along the Pacific Coast and winter activities in Olympic National Park are popular active pursuits.