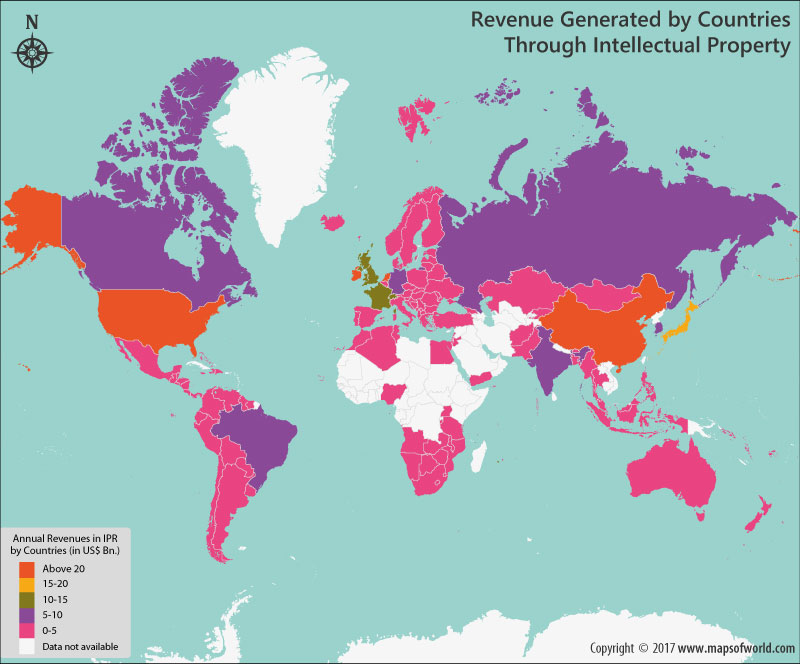 Just imagine if other companies were able to copy BMW’s technology and designs and sell automobiles to people, irrespective of their budget. But we know that is not possible due to the Intellectual Property Rights (IPR), which protects the work of a company or an individual from being copied by other people or organizations. In a nutshell, Intellectual Property makes the creator the sole owner of the work.

Intellectual Property includes the following: Patents, trademarks, industrial design rights and copyrights. Some jurisdictions also include trade secrets under IP. Other than this inventions, symbols, discoveries, words and phrases, music as well as literature also come under Intellectual Property.

So, in case an individual or an organization has to use the work of a creator, they have to pay a prescribed amount. The amount of payment varies from county to county with Ireland at the top most, and Burundi at the bottom most.

According to the World Bank data, the charges for the use of Intellectual Property in Ireland amounted to a whopping $75.114 billion in 2015.

The European nation of the Netherlands came at a distant second reporting a figure of $47.096 billion in 2015. Occupying the third and fourth spot were the United States and China, where the charges for the use of Intellectual Property in 2015 stood at $39.495 billion and $22.022 billion respectively.

The other nations at the top were Singapore, Japan, France, Switzerland and the United Kingdom.

In India, an emerging economy, the charges for the use of Intellectual Property were $5.009 billion. But in South Asia as a whole, the amount stood at $5.219 billion.

Meanwhile, the countries occupying the bottom spots were Burundi, Timor-Leste, Sao Tome and Principe, Vanuatu, Afghanistan and Bhutan where the figures ranged from $3.2 to $4.3 billion.