The Middle East is a roughly defined region of Western Asia, which often includes parts of Northern Africa, centering on the Arabian Peninsula. 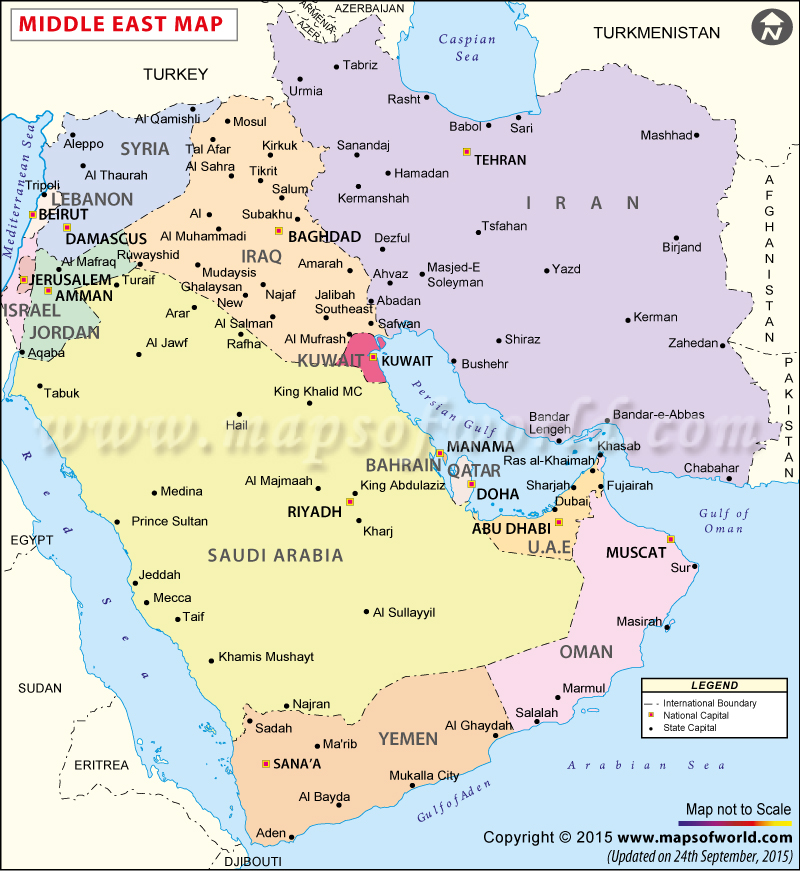 Description:Middle East map shows the countries in the Middle East and surrounding bodies of water.


Introduction about Middle East
Today, the “Middle East” is defined as an area, which extends from the Atlantic Ocean (west) to Afghanistan (east). More specifically, it covers an approximate distance of 5,600 kilometers.
It has an overall population of approximately 300 million people and surrounds the countries of Turkey, Qatar, Algeria, Morocco, Libya, Tunisia, Israel, Egypt, Syria, Lebanon, Saudi Arabia, Jordan, Bahrain, Kuwait, Oman, the United Arab Emirates, Iraq, Yemen, and Iran. The African nations of Sudan and Mauritania are also included in the Middle East. In recent times, one finds that the terms “Middle East” and “Middle Eastern” are considered a complete region, just as the way we would refer Central Asia, Southeast Asia or Europe. The Middle East is home to four distinctive cultural areas, i.e. the Iranian, Turkish, Arab, and the newly introduced Israeli culture.

Territories and regions
Here is a list of countries included in the Middle East that corresponds with Western Asia, with the exclusion of the Greek Cyprus, Caucasus, and after including Egypt:

Relations between the countries

Dependence on Middle East Economy
The Middle East economy is a diverse one. It consists of Cyprus, Bahrain, Gaza Strip, Iraq, Iran, Iraqi Kurdistan, Egypt, Jordan, Kuwait, Israel, Lebanon, Northern Cyprus, Oman, Syria, Qatar, United Arab Emirates, Saudi Arabia, Turkey, State of Palestine, and Yemen. Moreover, the area carves a niche for the production and export of oil. The oil industry will influence the complete area, both via the wealth, which it generates as well as via the labor movement.


Geography of the Middle East
The Middle East includes the states of Egypt, Oman, Yemen, Qatar, United Arab Emirates, Iran, Bahrain, Syria, Jordan, Turkey, Lebanon, Saudi Arabia, Kuwait, Iraq, and Israel. The Middle East area represents a region of more than five million square miles. The physical geography is too a varied one. One will find vast expanses of deserts, which experience low rainfall. Temperatures in these areas show huge extremes. Along the Mediterranean Sea coast and the Caspian and Black Seas, one finds the water lessening the extreme desert temperatures that results in a more moderate climate, which is same as that of California or southern Italy.

International relations with the Middle East
The recent concentration on Arab-Israeli relations has aided us to believe that Middle East diplomacy will be lowered to a single dimension. More specifically, the foreign strategies of Middle East states are guided by complicated and different motivations. These multiple factors owe as much to geography, history, regional alliances, and western influences as they do to the Israeli conflicts. The essentials of checking rival ambitions, enhancing economic opportunities, and seeking to establish alliances have consistently shaped the local landscape.