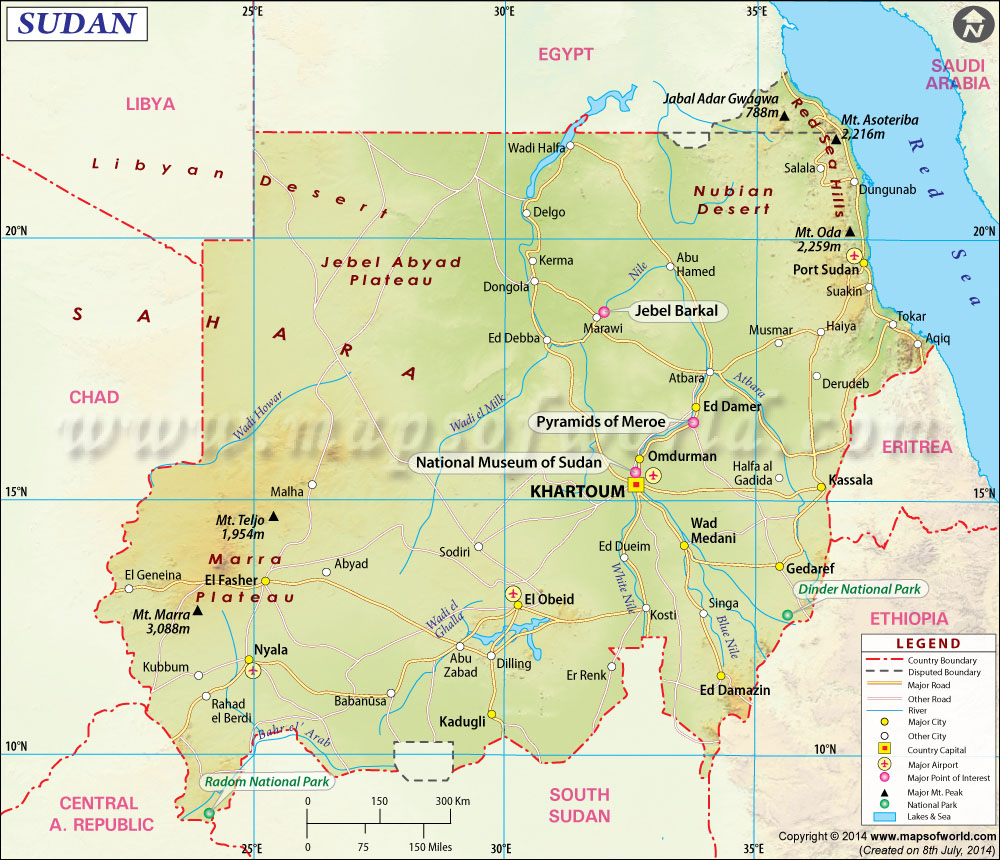 Human activity in the region of Sudan had existed in as early as the 18th millenium BC, evidenced by remnants of a Neolithic culture. In 1500BC, the Egyptian empire had extended their territories, conquering parts of the region.
The first great empire that emerged in Sudan was the Kushite empire. They conquered Egypt in the 8th century BC. But by 590 BC, Egypt had taken over the Kush capital of Napata, pushing its people to move to Meroe, where the Meroitic Kingdom was established. The kingdom lasted until the 4th century AD.

Over the next hundred years, Sudan was governed by a number of small and independent kingdoms. This period ended in 1820 when Egypt again conquered the region, invading the northern part of the country.

Rebellions started to occur in 1881 when a religious leader named Muhammad ibn Abdalla came into power, leading a revolt. However, in 1899, Sudan came under the joint forces of the British-Egyptian rule, lasting until 1955.

Sudan independence came in 1956, but civil wars between the Islamic government and the South regions soon began. The wars lasted for 17 years, erupting again in 1983 and well into the 90’s, resulting to South Sudan’s independence in 2011.

Sudan is located in the Nile Valley of Northern Africa. The borders are Egypt to the north, the Red Sea, Eritrea, and Ethiopa to the east, South Sudan to the south, Central African Republic to the southwest, Chad to the west, and Libya to the northwest.

The Nile River runs through the center of the country, dividing the land into eastern and western halves.

The landscape in Sudan is characterized by generally flat plains, broken into several mountain ranges. It is the 3rd largest country in Africa, and the 16th in the world.

Sudan is a federal presidential representative democratic republic. The President is Head of State, Head of Government, and Commander in Chief of the Armed Forces. Legislative power is exercised by the government and the bicameral Parliament.

Sudan’s parliament consists of the National Assembly or lower chamber, and the Council of States or upper chamber. The Legal system is based on the Islamic Sharia Law.

Sudan offers an interesting mix of ancient ruins and beautiful natural resources. Sudanese people are friendly and hospitable, and because of the challenges of getting a tourist visa in the country, tourists are very few in top destinations.

The Pyramids of Meroe are the most popular tourist attractions in Sudan. Built during in 500BC by the Meroitic Pharaohs, the pyramids offer precious ancient graffiti and hieroglyphics that have been well-preserved. Tourists can enter the pyramids to see these ancient drawings. The best time to visit the pyramids are at sunset, when the sun gives the pyramids a golden hue.

The Red Sea is fast becoming a popular tourist destination, with its crystal clear waters and coral reefs and popular resorts around it.

The Khartroum capital city is one of the top destinations for tourists. There’s a mix of colonial buildings, museums, and souks, as well as the flashiest and most modern establishments in the country.

Located north of the capital, the Jebel Barkal is a mountain with a flat top, listed as a UNESCO World Heritage Site along with the town of Napata located on the mountain’s foot. A total of 13 temples, 3 palaces and a number of ancient ruins can be found on the mountain, as well as other ancient structures found in the town.

Omdurman is another large Sudan city, known for being a Muslim city. It hosts the largest market in the country, which is the Souk Moowaileh. It is also the best city in Sudan that gives tourists a look back into the country’s historic past.

The Dinder National Park is the most important wildlife reserve in Sudan and home to a wide number of mammals and bird species.

Education in Sudan is free and compulsory for children ages 6-13. The primary language of instruction is Arabic but English is also used. Schools, however, are heavily concentrated in the urban areas.

A total of 19 universities in Sudan exist, but enrollment and students who finish higher education are hampered by the government’s requirement that male students render military service before they graduate.Adult literacy rate in Sudan is at 70.2%, with 79.6% for males and 60.8% for females.