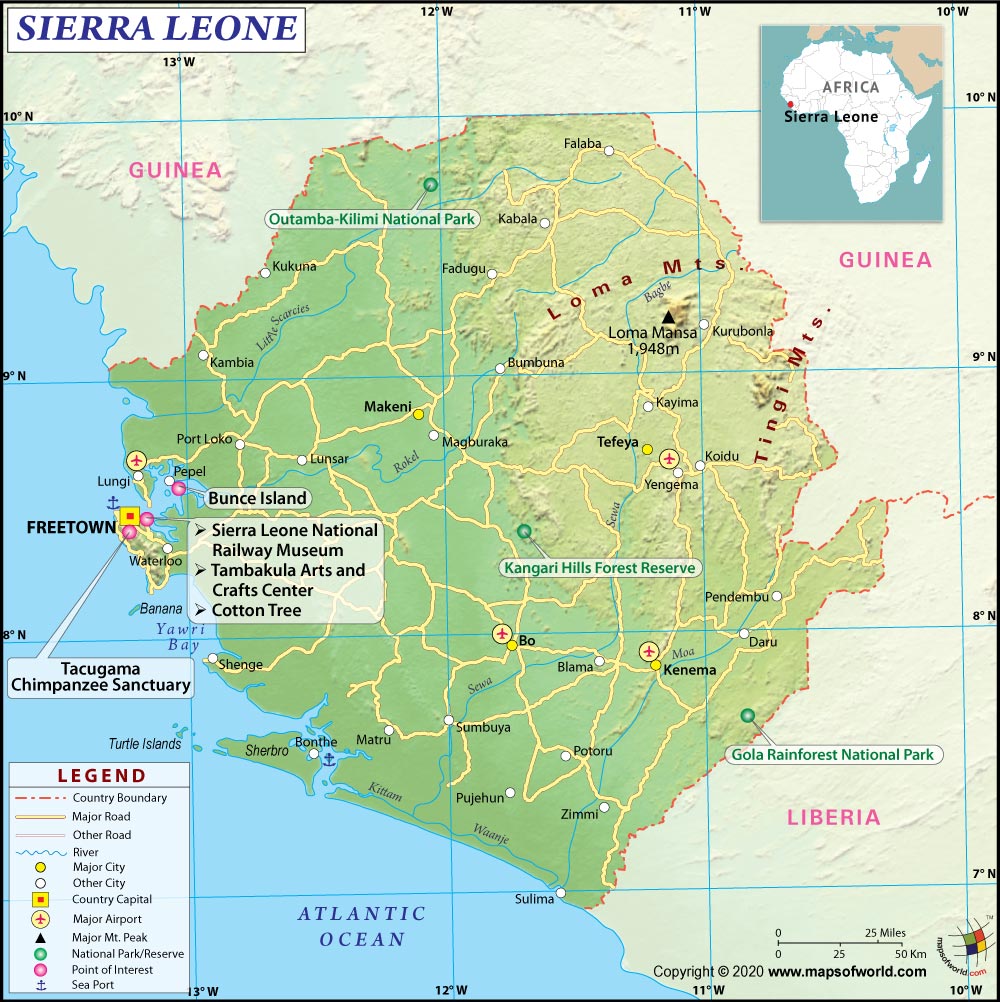 The earliest people migrated to the region of Sierra Leone at least 2,500 years ago, arriving from various parts of the African continent. When Portuguese explorers arrived in 1462, the region was inhabited by several tribes, including speakers of Loko, Temne, Bulom, and Lumba, as well as the Susu and Fula people in the north. The Portuguese named the region Serra de Leao, or Lion Mountains, for the shape of its hills, which became Sierra Leone in Italian. After the Portuguese, the Dutch, French, and British arrived, and each of the European groups participated in slave trade on the coast of West Africa. In the 16th century, the coast of Sierra Leone was invaded by the Mane, who were a warrior tribe from the east. The Mane fought the natives, who previously did not have a violent culture, but as the Mane integrated with the society, the overall region became militarized.

The British became a stronger power in Sierra Leone in the 17th century, with the Dutch and French as its greatest European competitors. The tribal rulers, however, were strengthened after the Mane invasion and were able to keep the Europeans from taking over. By the end of the 18th century, former slaves who had fought on the side of the British in the American Revolution arrived in Sierra Leone, together settling the Province of Freedom.

A second settlement was later established in 1792, called Freetown and was more a successful colony, and a refuge for freed slaves. The colony was ruled by the British, along with other British colonies along the coast of West Africa, including Gold Coast and the Gambia. The British began to move inland, especially during the European Scramble for Africa in the 1880s. The native people rebelled against British Rule with the Hut Tax War in 1898, in which the natives were defeated.

Sierra Leone became a separate colony and protectorate in 1924. Slavery was abolished in Sierra Leone in 1928, but discontent with the British rule continued to grow and more revolts broke out in the 1950s. Sierra Leone was granted independence in 1961, led by Sir Milton Margai, who became prime minister. A series of military coups disrupted the government in the late 1960s, followed by a period of single-party rule. Internal conflict and rebellions from the Revolutionary United Front led to a government upheaval, with the democratic election of President Ahmad Tejan Kabbah.

Situated on the coast of West Africa, Sierra Leone has long coastline along the Atlantic Ocean, with coastal Guinean mangrove swamps giving way to hilly forests, plateau, and mountains in the interior. Not far from the equator, Sierra Leone has a tropical climate. The inland features alternating plateaus and mountain ranges, in which the highest point in the country, Mount Bintumani, rises 1,948 meters (6,391 feet) above sea level.

Central Sierra Leone is covered in lowland plains, with forests and farmlands, while the terrain of the northern region has forests and savanna, and the south features rainforests. Along the border with Guinea and into the southern province flows the Moa River, or Makona River. The border with Liberia is partially formed by the Mano River.

Along the coast is Sherbro Island, while the capital, Freetown, is situated on a peninsula. The Sierra Leone Harbour is one of the largest natural harbors in the world. Protected areas include Western Area National Park, Outamba Kilimi National Park, and Kangari Hills Forest Reserve.

Visitors to Sierra Leone often head straight for the Banana Island, situated not far from Freetown. The tropical island is home to scenic views of forests, recreational activities like scuba diving, with shipwrecks to explore, and fishing. The island is also an important historical site for its use during the slave trade, and features colonial architecture. Another destination from Banana Island is the Turtle Islands, which are a scenic, remote, and quiet place to relax. Bonthe Town is a city on Sherbro Island, which is also worth a visit, for its British colonial architecture like its stone church.

The capital, Freetown, has many beautiful beaches, like Lakka Beach, Bureh Beach, and Lumley Beach. The beaches have varying degrees of accommodations and cleanliness, as well as differing scenery. Additional sites in Freetown are museums, the Cape Sierra Leone Lighthouse, colonial architecture, including houses built on stilts, and Bunce Island. Bunce Island was an important site in the history of the country, and even the continent, as the one-time site of slave forts used to house captured slaves before they were moved to the Americas.

The main international airport in Sierra Leone is located in Lungi, outside of Freetown. Freetown International Airport offers service to London, Paris, Brussels, and regional destinations across Africa. The airport is connected to the city via water taxis and car ferries, which is faster and cheaper than travel by road. Driving into Sierra Leone can be managed from both Guinea and Liberia via private car, taxi, or bus, with minibuses called poda poda. Passenger boat from Guinea and Gambia dock in Sierra Leone’s harbor.

Around the country, many roads have fallen into disrepair, but they are gradually being resurfaced and many major roads are in good condition. The bush taxi, or poda poda, is an inexpensive way to get around, and another option to shared taxis. There are also moto-taxis, which are inexpensive, fast, and often dangerous.