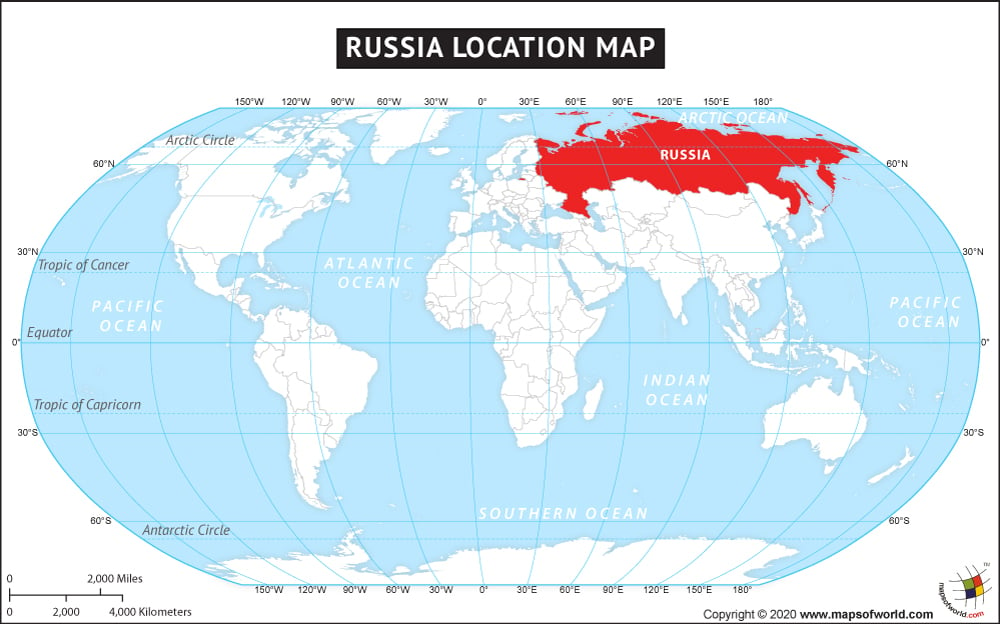 Description : Map showing Where is Russia located in the World.
0FacebookTwitterPinterestEmail

Location of Russia on Map

Russia or formally Russian Federation is located in the northern part of Eurasia. Russia, the largest country of the world covers a total area of 17,098,242 sq. km. and shares its land boundary with fourteen neighboring countries. China, Mongolia, North Korea, Kazakhstan in the south, Georgia, Azerbaijan in the southwest, Norway, Finland, Lithuania, Estonia and Latvia in the northwest and Poland, Belarus and Ukraine in the west. It is bounded by Barents Sea, Kara Sea, Laptev Sea and East Siberian Sea in the north. Russia has 37,653 km long coastline. The latitudinal and longitudinal extent of Russia is 41° and 82°N and 19°E and 169°W respectively.

Moscow, the capital city of Russia is also its largest city, it is a major political and economic center in Russia and in Eastern Europe. Russia has wide base of natural resources, in fact it has 40 UNESCO listed biosphere reserves. Topographically, Russia has plains in the west of Urals, mountainous regions in the south and tundra and coniferous forest in Siberia. Due to its vast size Russia experiences wide range of climates though humid continental climate is predominant in most part of the country barring Siberian region, which experience sub-arctic climate and tundra climate in polar north.