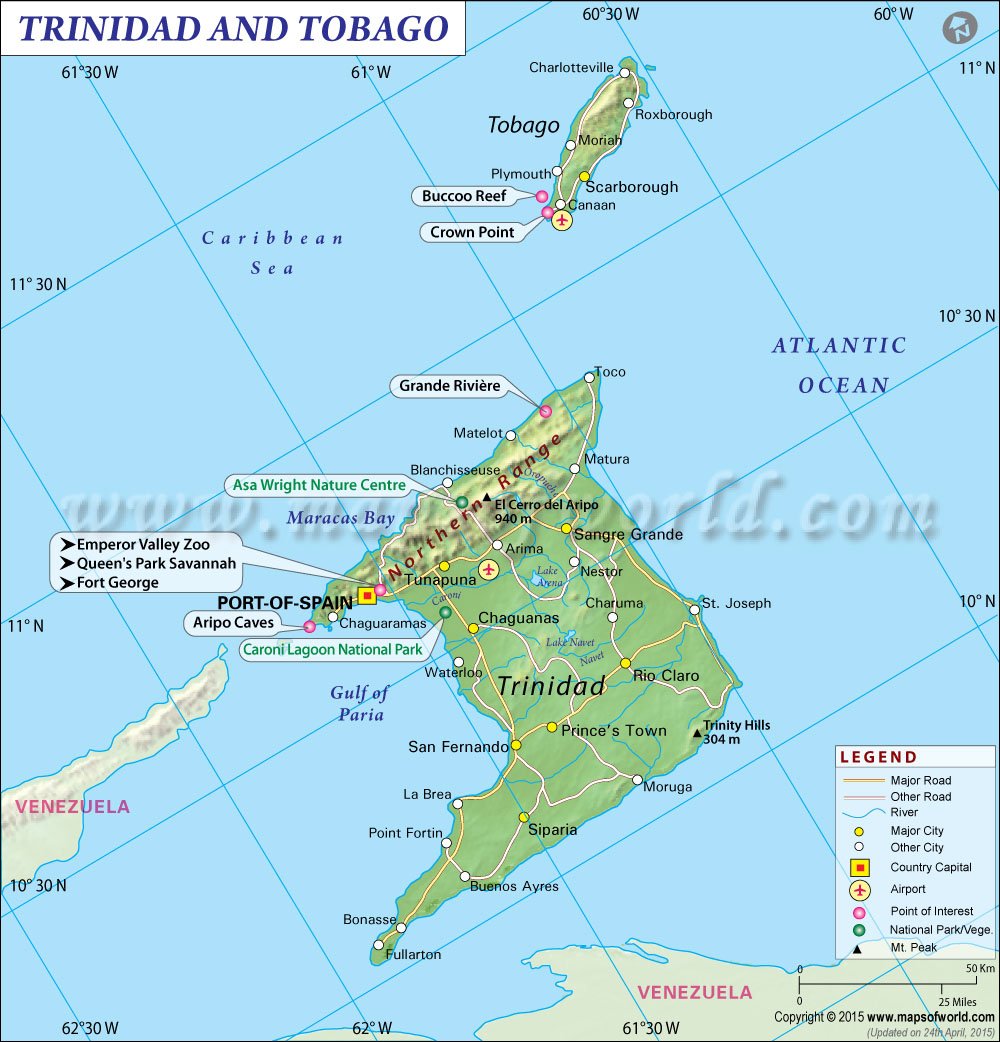 About Trinidad and Tobago

Explore this Trinidad and Tobago map to learn everything you want to know about this country. Learn about Trinidad and Tobago location on the world map, official symbol, flag, geography, climate, postal/area/zip codes, time zones, etc. Check out Trinidad and Tobago history, significant states, provinces/districts, & cities, most popular travel destinations and attractions, the capital city’s location, facts and trivia, and many more.

Introduction : holding the status of being one of the most flourishing Caribbean islands, it was once a part of the Spanish colony. Later it passed into British hands. As a result of this one can witness a coalescing of several cultures and races.

However, these idyllic islands finally reclaimed their freedom in 1962. The islanders are colloquially addressed as ‘Trinbagonians’ or ‘Trinis’. The Trinidad and Tobago archipelago is one place where you can choose between relaxing and getting into the groove.

Physical Map of Trinidad & Tobago : the archipelago of Trinidad and Tobago comprises of some 23 islands in total. Of these only the islands of Trinidad and Tobago are big; the rest 21 are tiny islets, called ‘satellite islands’. The landscape of the Trinidad and Tobago islands are comprised of coastal plains and any elevation occurs in the form of low altitude hills and mountains. All these mountains are actually continuations of ranges in Venezuela. The Northern Range, for example, is an extension of the Venezuelan Andes Mountains. The Northern range runs parallel to the coast and has a rugged terrain. Surrounding the islands is the Bucco coral reef system. The chief rivers flowing through the islands are the Caroni River and the Ortoire River. Most of the land is arable, except the tract to the south of the islands.

Location of Trinidad And Tobabgo : sandwiched between the water bodies of the Caribbean Sea and the North Atlantic Ocean, the Trinidad and yobago group of islands lie in close proximity to the country of Venezuela in the continent of South America – Venezuela being southwest of it.

Apart from Venezuela, its other political neighbors are Guyana to its south and Puerto Rico a little further off northwest.

Climate of Trinidad & Tobago : Trinidad and Tobago have little climatic variations through the year. The distinctions in weather are never stark nor are the prevalent conditions harsh. For this, there is only the regular trade-wind to thank. The rains occur between the months of May and December and are rarely torrential.

Flora and Fauna of Trinidad & Tobago : Trinidad & Tobago together have a mind-blowing range of both flora and fauna. While Trinidad’s plant and animal life is not too different from the Venezuelan, Tobago sports a flora and fauna that is typical of a volcanic land. Palms, giant aroids, large broad-leaved varieties and wild flowers are found aplenty. The rare orchid is a specialty of Trinidad and Tobago. Due to plenty of forest space and vast water bodies around, the avian fauna on the islands thrive. Among the birds that that prove a frequent sight in the islands are the orange-billed nightingale, thrush, ant-birds, tanagers, the ruby-topaz humming-bird, tufted coquettes, scarlet ibis, Savannah hawks, the red breasted blackbird, wild Muscovy ducks, mockingbirds, the yellow-headed Amazon parrots and the blue-gold macaws.

In the group of animals, you can find the deer, wild pigs, agouti, red howler monkey, iguanas and the weeping capuchin. Other species of fauna are the golden tree frog and turtles.

Art : Art comprises of all that the distinctive cultures offer individually along with forms that were born of combinations. So, Chinese paintings, ceramics, fancy costumes, woodcarvings, and gold and silver jewelry are some of the things that top the list .

Culture : talk of a medley of culture, and you get it! This is what you really get to see in the culture of Trinidad and Tobago. Just how many ethnicities coexist, you ask? Keep counting… African, Spanish, French, British, Indian, Amerindian, Caribbean, Chinese, Venezuelan, Portuguese, and American, to name just a few.

Music : the archipelago is renowned for being the birth place of the Calypso music. From this genre followed several variations of it like the Reggae, Soca and Rapso. The Calypso was born out of troubled waters. Due to the disability of communications between the slaves who were deported there, a Creole culture arose, coalescing traits from several varieties of African ethnicities.As a result, similarities can be found between the calypso music and a West African genre – ‘Kaiso’. Trinidad and Tobago also boasts of a dance- music called the Soca, which is unique for the sheer reason that it is an overt amalgam of different cultures.

The Soca is a blend of the Calypso with beats and rhythms from Indian music. Incessant drum beats characterize this form of music.

Flag of Trinidad And Tobabgo : the island republic of Trinidad and Tobago has an uncomplicated yet bold flag. There are three colors that completely predominates it – namely white, red and black. The flag is rectangular in shape and is divided into two red triangles – one to the top right and the other to the bottom left – by a black band that runs diagonally from the top left to the bottom right, which is in turn sandwiched between two thin diagonal white stripes. The color code translates as the people of Trinidad and Tobago being represented by the color red, the two white stripes for the sea and the color black for strength, perseverance and industriousness.

Economy of Trinidad & Tobago : the economy of Trinidad and Tobago relies mainly on its off-shore oil resources. The discovery of petroleum has boosted the financial status of the island republic immensely. The chief industries in Trinidad and Tobago are its petroleum, chemicals, food processing, cement, beverage brewing and its cotton textiles. Revenues are also earned from exporting commodities such as petroleum its by-products, steel, fertilizer, chemicals, cocoa, sugar, citrus, coffee, flowers. The tourism industry is a major player too, contributing to both exposure and revenue.