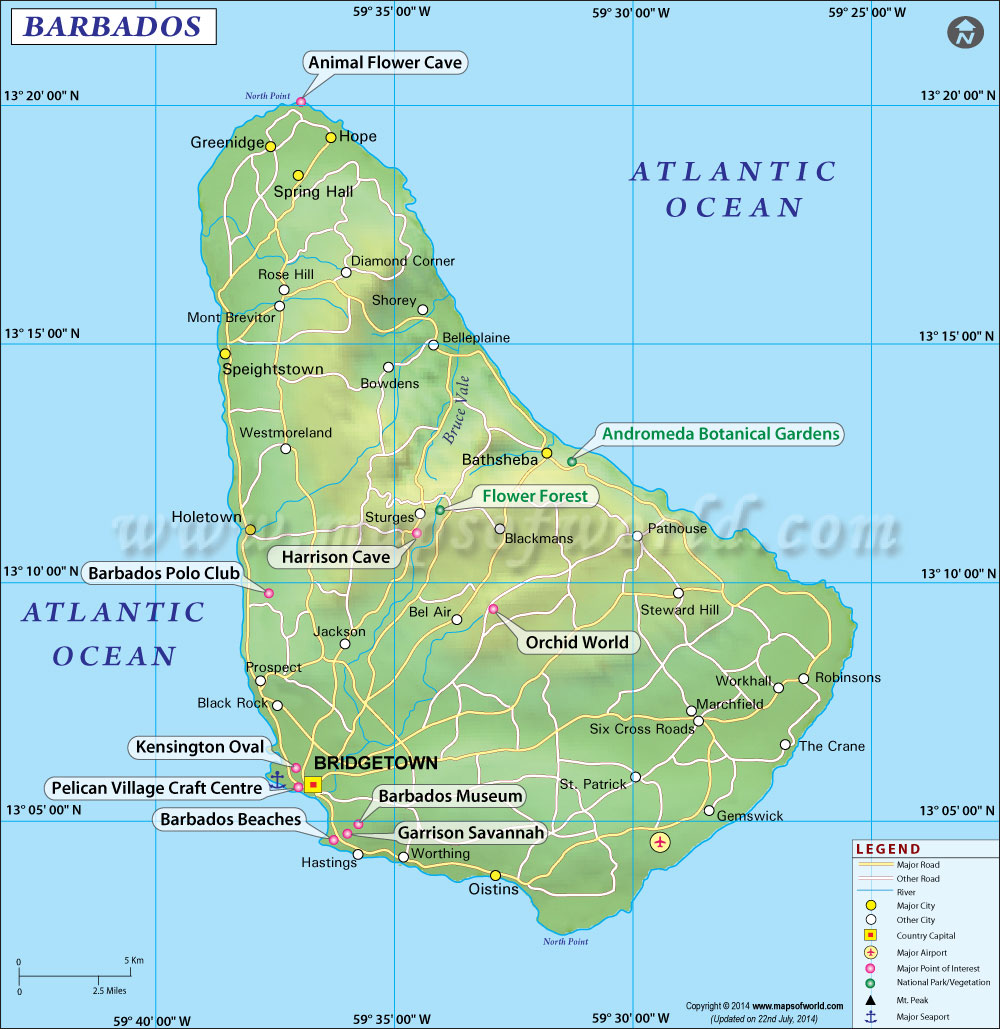 Explore this Barbados map to learn everything you want to know about this country. Learn about Barbados location on the world map, official symbol, flag, geography, climate, postal/area/zip codes, time zones, etc. Check out Barbados history, significant states, provinces/districts, & cities, most popular travel destinations and attractions, the capital city’s location, facts and trivia, and many more.

An independent state, the island of Barbados, is famous for its natural beauty and attracts large numbers of tourists worldwide.

Llies east of Saint Vincent and the Windward Islands of the Lesser Antilles. The island is 34 km long and 23 km wide at its widest part and has a total area of 430 sq km.

Barbados is flat along the coast with a hilly interior. Mount Hillaby is the highest point and rises to 1,115 ft. As Barbados has no natural deepwater harbors, it is largely surrounded by coral reefs and coral deposits form the surface of the island and are underlain by sedimentary rock.

Barbados is tropical in nature, accompanied by sea breezes. The months from June to December sees abundance of rains, with average annual rainfall varying from 1,000 mm on the coast to 2,300 mm on the central ridge. The country is also, on occasions, struck by hurricanes.

Flora And Fauna of Barbados

As far as flora is concerned, Barbados lacks mineral resources, and nearly all the natural vegetation has been cleared for cultivation. The wildlife of Barbados is very limited and includes hares, monkeys, mongooses, tree frogs, and various species of birds.

The population of Barbados is mainly made up of the blacks, who account for about 90 percent of the total population. The remaining 10 per cent is made up of whites and persons of mixed racial descent. Almost 30 percent of the people are Anglicans; other important faiths include various Protestant sects and Roman Catholicism. The people of Barbados lay strong emphasis on education, which has been made free and compulsory for children between the ages of 5 and 16.

Arts, Culture and Music of Barbados

The flag of Barbados is made up of three equal vertical bands – blue towards the hoist side, gold in the middle and blue at the bottom. The center gold band has the head of a black trident, which represents independence and a break with the past.

But the government, not wanting to totally depend on sugarcane products, has diversified into other segments like manufacture of clothing, furniture, electrical and electronic equipment, and plastic items. New avenues in petroleum and natural gas are also being exploited by the government. Along with fishing, the government has tried to take tourism to greater heights, with this industry earning more foreign revenue than the sugar industry. But the success of tourism was followed many problems like water pollution from waste disposal by ships, causing damage to surrounding reefs. Barbados is, in fact, a member of two free-trade organizations, the Caribbean Community and Common Market (CARICOM) and the Association of Caribbean States (ACS). The island is well served by roads, of which some 1,475 km are paved. An international airport is located at Seawell in the southeast.