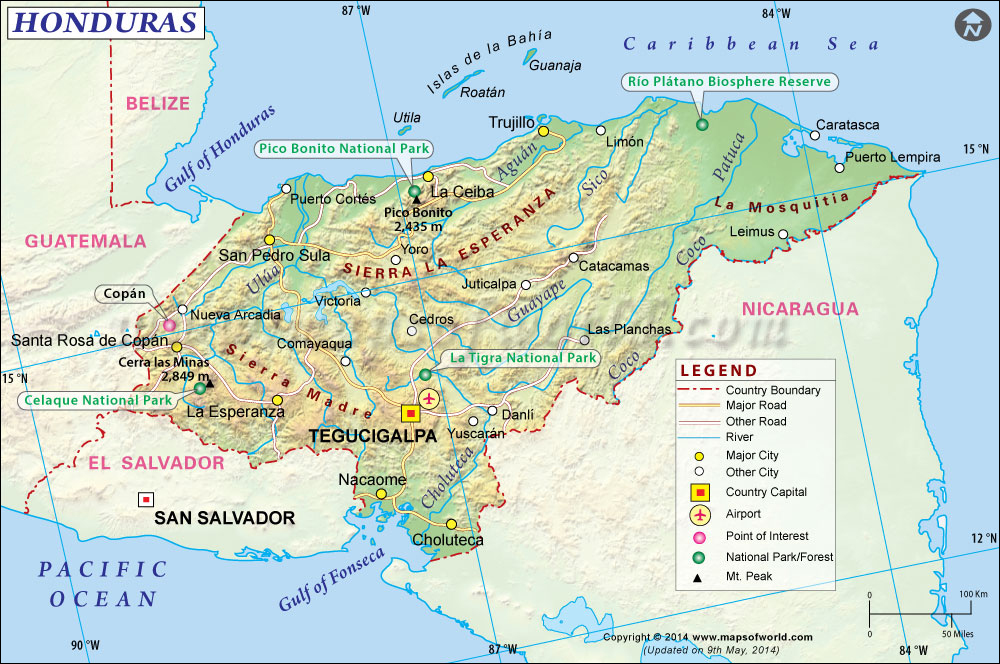 Explore this Honduras map to learn everything you want to know about this country. Learn about Honduras location on the world map, official symbol, flag, geography, climate, postal/area/zip codes, time zones, etc. Check out Honduras history, significant states, provinces/districts, & cities, most popular travel destinations and attractions, the capital city’s location, facts and trivia, and many more.

Travel to Honduras, which was officially referred to as Spanish Honduras where one get to observe primitive colonial settlements to the ancient ruins of Maya times, from Caribbean coastline to coral consolidated reefs, from the beaches of the Pacific region to the beautiful Bay Island.

Honduras is nestled in the cape of Central America that stands as the second largest Central American republic. The place is bounded by the Caribbean Sea from the northern side and the Pacific Ocean from the southern side, through the region of Gulf of Fonseca.

Honduras can be divided into three discrete topographical regions:

The two coastal lowlands comprises of the Caribbean lowlands in the north end side while the Pacific lowlands along the Golfo de Fonseca.

The interior terrain is mountainous in nature, while the coastal lands are marked with alluvial plains.

The Honduras Mountain stretches and unites along with the Nicaragua towards the east. Some of the highest peaks that fall nowhere while compared to the western region are Montaña de la Flor, El Boquerón (Monte El Boquerón) and Pico Bonito.

Caribbean lowlands: The place widens to the broad river valley along the region of Río Ulúa adjacent to the Guatemalan border where Both Puerto Cortés, the largest port, and San Pedro Sula, the industrial capital is positioned.

Pacific lowlands : The two eroded volcanoes of the region are Zacate Grande and El Tigre that widens along the Pacific coastal region of Central America.

La Mosquitia province that lies towards the northeastern part is basically undeveloped lowland jungle whereas the lowland San Pedro Sula valley lying towards the northwestern region is chiefly inhabited.

Some of the major rivers passing through this land are Ulúa, flowing to the Caribbean land that originate from the Valle de Sula. The Río Goascorán passes through the borderline of El Salvador and Honduras thereby defining them as distinct regions while touching the areas of Golfo de Fonseca and the Río Lempa. Lago de Yojoa, which is placed towards the west-central part of the country, is known as the natural lake of region.

Honduras is constituted with several groups of island: Along the Caribbean Sea, the islands of Roatán (Isla de Roatán), Utila, and Guanaja collectively shape the Bay Island called as the Islas de la Bahía. It is one of the eighteen departments into which the province is accordingly alienated.

This flag of Honduras was officially accepted in the month of January 9, 1866. The flag of Honduras relates well to the design of United States of Central America flag. The flag is designed with three equal parallel bands; wherein the topmost and the bottom most band, colored in blue denote the presence of two major seas in our province namely the Pacific Ocean and the Caribbean Sea. The blue five-pointed stars are scattered in the middle portion of the white band in a typical X pattern, which denotes the existing five nations of the previous United States of Central America after the province emerged its victory and autonomy from the Spain domination. They were El Salvador, Costa Rica, Nicaragua, Honduras and Guatemala nation.

Honduras is positioned within the tropics, where the climatic condition varies as per the topographical regions of the province is concerned.

•  The Pacific Lowland – Tropical Wet and Dry Weather – High temperature and dry during November to April.

•  The Interior highlands – Tropical Highland Weather- Dry with a fall in temperature with a raise in elevation.

It is the elevation and not season that define the climatic condition of the tropical region, which is not subjected to weather in similar with the northerly latitudes.

Tierra caliente means hot land is said to those regions where the land area is underneath 1,000 meters. The land area lying in between 1,000 and 2,000 meters are known as Tierra templada (temperate land) while Tierra fría (cold land) are those lands which ascends above 2000 meters.

The Caribbean and the Pacific lowland area experience a Tierra caliente where a high in temperature during the daytime is expected. April is the warmest season of the year with slight showers of rain. December or January brings a sigh of respite in the Caribbean lowland area where the winds from the northwest area cools down the high humidity within the region.

Tierra templada to Tierra fría can be witnessed in the interior highland area where April being the warmest month and January, the coolest. The temperature ascends to a freezing point with frost covering major portions of the elevated region.

Caribbean lowlands experiences showers round the year while the interior highlands and Pacific lowlands witnesses down pouring during the winter months of May to September. The place is hit by occasional hurricanes or tropical storms that passes through the Caribbean.

Flora And Fauna Of Honduras

Get a vivid sight of varied flora and fauna while traveling to Honduras. There are about 725 different assortments of bird species. The native birds of the region are macaws, toucans, quetzals, motmots, parrots, tanagers, orioles, herons, ibis, terns and kingfishers that can be sighted frequently. Honduran Emerald, is unique to this region that can be seen along the dry forest region of the Olanchito province. The Scarlet Macaw is the national Bird of this region which can be located in the Olancho, Rio Patuca and Mosquitia province.

The native animals of the region being species like anteater, armadillo, coyote, deer, fox, peccary, pocket gopher, porcupine, puma, tapir, and monkeys. White-tail Deer (odocoileus virginianus) is the national animal of the region. Different species of sea turtles along with the Hawksbill can be sighted here.

Among the reptiles mention can be made of bushmaster, coral snake, fer-de-lance, horned viper, rattlesnake, and whip snake, caiman, crocodile, and iguana.

The local natives of Hondurans are lovingly known as catrachos. They reside along the central and western upland valley and along the La Costa Norte, where most of the settlements resort. South and east are less inhabited.

Hondurans belong to the mestizos community that is related to the Spanish-group of people belonging to the Indian-Spanish heritage. Amerindians cover a minor portion of the population. Spanish is the local language spoken here while English is even accepted in the Bay Island area. The other local languages spoken here are Lenca, Miskitu, Garifuna, and many others.

The religion thriving in this area relates to the evidence of the Roman Catholicism where most of the area is marked with the presence of ornate churches, belonging to the colonial era.

Afro- and Anglo-Antilleans who traveled from the Caribbean island are well placed in the region of north coast and the Bay Islands. Garífuna, or Black Caribs, nestle along the coastal villages while a minor portion of the German and Middle Eastern origins are located near the northern coast.

The Hondurans are friendly in nature by are socially uneducated due to their poor status.

Arts, Culture And Music Of Honduras

Art: Visit the Copan museum , where one may come across wonderful exhibits along with architectural pieces left behind during the Mayan time. Get to see different faces of the Mayan society where all the sculptures are created with rocks. It even describes how Mayans had an idea about a person dying and described its significance in the leftover artwork, which was called as the Underworld. Next, tour to the Museum of Anthropology and History of Valle de Sula that articulates the historical significance behind the discovery of Valle de Sula and about their cultural ethnicity. Honduras is known for coming up and designing of things made of Lenca ceramics.

Culture: Handshakes is quite a usual way as far as greeting somebody is concerned. The greeting is between men and women both who indulge in a prolonged handshake gesture. One may come across a Spanish phrase called si Dios quiere which means God willing, which is relatively used when a commitment is made, be it personal or official. The local natives value their family and customs above anything else. Even above any kind of business proposals.

Music: Get an indigenous combination of the European and African basics while listening to the music that originated in Honduras. The native musical instruments widely popular in this region are marimba, conch shell, guitar, accordion, caramba and marimba. Listen to the musical rhythm played by an ethnic group; named Lenca that still refreshes the melody of oldies of the long-gone era.

The Garifunas carry a vibrant tradition while the group of Miskitos are known to carry their own musical rhythm, along with the native dance of guancasco that are popularly witnessed in this region.

Honduran folk music originated from the Spanish melody while the popular music of the region seems to gain its influence from the Mexican and the American origin.

Visit the province of ancient capital of Comayagua, which is an essential hub to the contemporary Honduran music, where the College for Fine Arts resides.

The Garifuna seems to have derived from the Nigerian slaves who escaped from St. Vincent to the region of Central America when the British conquered the region.

Various forms of Garifuna folk music and dance are chumba and hunguhungu, in association with the punta. Women usually resort to music’s like eremwu eu and abaimajani, while men listen to laremuna wadauman a typical work song. The assorted ranges of dance music accepted in the region are matamuerte, gunchei, charikawi and sambai.

Honduras still remains as one of the poorest nations in the Western Hemisphere region that is reliant basically on the U.S. aid. The banana plantation supports the Honduras economy, which is cultivated along the northern coast that was set up by the United Fruit Company and the Standard Fruit Company, the two major US Companies who ventured in this region.

The commodities that are exported from this region are bananas, coffee, timber, minerals (Silver, lead, zinc), beef, and seafood. The agricultural industry supports the economy efficiently. The major crops that are produced here are corns, beans, rice, and sugarcane.

Honduras is known to have in store rich reserves of forest resources and mineral deposits. Silver, lead, zinc, iron, gold, cadmium, antimony, and copper are some of the possessions the country preserves in its stocks.

Several industries that are located in the area of San Pedro Sula are chiefly based on sugar, coffee, textiles, clothing, lumber, and wood products.