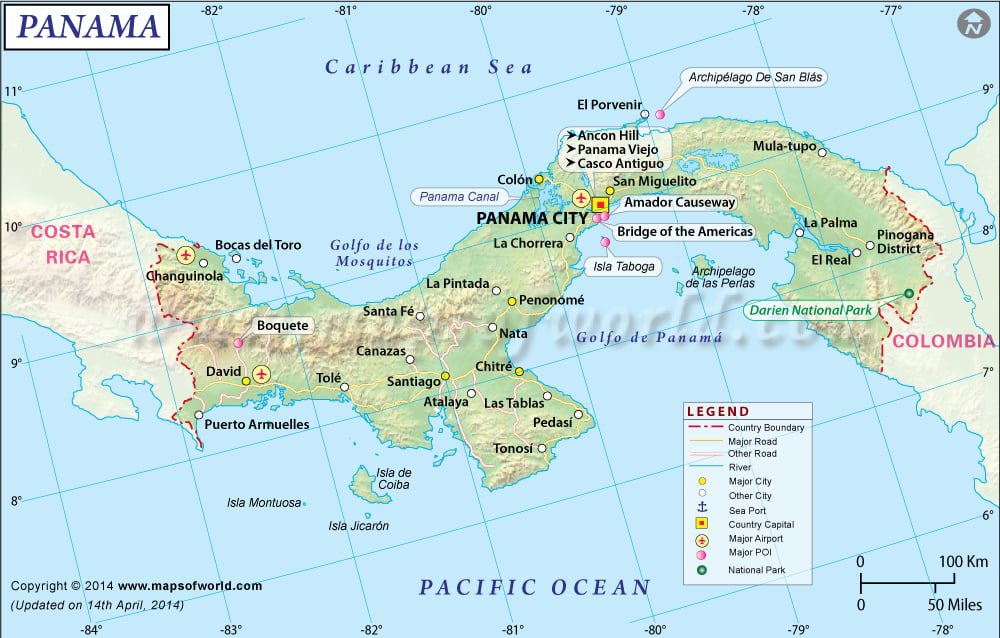 Explore this Panama map to learn everything you want to know about this country. Learn about Panama location on the world map, official symbol, flag, geography, climate, postal/area/zip codes, time zones, etc. Check out Panama history, significant states, provinces/districts, & cities, most popular travel destinations and attractions, the capital city’s location, facts and trivia, and many more.

Panama regained its independence from Colombia on 3 rd November in the year 1903. Visit this country and enjoy yourself to the most.

The land of Panama is full of mountain ranges, hills, highlands and plateaus. Coastal regions also cover a considerable portion of the country. The highest altitude of the country is the Volcan de Chiriqui peak that rises almost 3,475 meters above the sea level. The country bridges the gap between North America and South America.

Panama is located towards the southern region of the Central America. The neighboring countries are Colombia in the southeastern region and Costa Rica in the northwestern side. The Republic of Panama also shares its borders with the Caribbean Sea and the North Pacific Ocean.

You must gather some basic details about the climate of the place you are going to visit. The climate of Panama is basically tropical. The weather remains hot and wet throughout the year. You might also see cloudy sky.

However the mountainous regions are characterized for heavy rainfalls throughout the year. During the months between May and January, you may face rainy season. The dry spell continues from January to May.

Flora and Fauna of Panama

Flora: The Republic of Panama has a diverse plant life. Rainforest and savanna forest can be seen in the land of Panama. Towards the coastal regions, you will find evergreen trees. On the other hand if you go towards the Pacific side, you will find the semi-deciduous plants. Besides that, several species flowers are also found. Holy Ghost orchid is the national flower of the country.

Art, Culture and Music of Panama

Art: In Panama, various forms of art are practiced. The molas, appliqué works, designer textiles etc are very popular here. Basketry and woodcarvings are also common in Panama. Besides that, leatherworks, Guaymí Indians necklaces and so on are also made in various corners of the country.

Culture: Panama has a diverse culture. You will find six Indian cultures in this country. Folklores are very famous in Panama. Several dance forms have also been adopted from various races of the country.

Music: Music is very much appreciated in Panama. The different forms of music in this country are salsa, reggae, merengue, vallenato etc. However the local music of Panama such as charts, folklores is also popular here.

Balboa is the official currency in Panama and USD ($) is the paper currency, which has acceptance all over Panama and the rate of paper currency is 1.00 PAB = 1.00 USD. PAB is the ISO4217 code of Balboa. The coins of Panama are made of the same metal used in America. The coins are of the same shape and size as the American coins. The exchange rate of Balboa is fixed at 1:1 in relation to the US dollars. Exchange of currency is not required for travelers with U.S. Dollars. The currency and traveler’s checks are exchanged at hotels, banks, and exchange shops and in the international airports of the country. Best rates of exchange are offered by bigger banks but black marketers needs to be avoided. American Dollars is widely circulated in Panama though Balboa remains the official currency of Panama.

The industries of Panama mainly consist of mining, manufacturing and construction activities. Industries in Panama have recorded a substantial growth over the years. Like in 1990s it has generated a growth of 7% and in 2000 it accounted for 17% growth in GDP.

In recent years, Panama has experienced an increase in construction projects. Both the government and private sectors have made large investments for constructing roads, bridges and ports. So there has been an increase in the demand for finished wooden products and materials for construction. In order to meet this demand the production of these commodities has risen significantly.

In the year 2000, construction activities have risen to 7.5%. At present, Panama manufacturing accounts for 8% of GDP. In the country there are many food processing units and plants engaged in producing sugar, clothing, hats, soap, shoes, edible oils, ceramics, furniture and alcoholic beverages. Other products manufactured here are cement and chemicals.