44th President of the US – Barack Obama

Barack Hussein Obama II, popularly known as Barack Obama, served as the forty-fourth President of the United States. He was born on August 4, 1961. He is the first African-American… 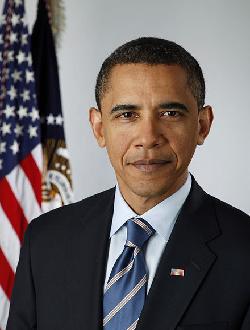 Barack Hussein Obama II, popularly known as Barack Obama, served as the forty-fourth President of the United States. He was born on August 4, 1961. He is the first African-American who became the president of the country.

Before getting elected as the President, he served as a senator from Illinois from January 3, 2005 to November 16, 2008. He has authored three books so far, ‘Dreams From My Father: A Story of Race and Inheritance’ (published in 1995), ‘The Audacity of Hope: Thoughts on Reclaiming the American Dream’ (published in 2006) and ‘Of Thee I Sing: A Letter to My Daughters’ (published in 2008).

Before getting his degree in law, he also worked as a community organizer in Chicago, Illinois. He was a civil and political rights attorney in the city. From 1992 to 2004, he worked as a teacher of Constitutional Law at the University of Chicago Law School. During 1997 to 2004, Obama completed three terms as the representative of the 13th district of the Illinois Senate.

In February 2007, Obama started his presidential campaign. Following his primary campaign in 2008 versus Hillary Rodham Clinton, Obama got the nomination of the Democratic Party. In the United States Presidential Election in 2008, Obama trounced John McCain, the Republican candidate. He took oath as president on January 20, 2009.

He was the Nobel Peace Prize awardee in 2009.

s Barack Obama took a number of encouraging initiatives. In February 2009, he ratified the Economic Stimulus Bill as the American Recovery and Reinvestment Act, and in December, 2010, he introduced the Tax Relief, Unemployment Insurance Reauthorization, and Job Creation Act. Other bills passed by him include the Dodd-Frank Wall Street Reform and Consumer Protection Act, the Patient Protection and Affordable Care Act, and the Don’t Ask, Don’t Tell Repeal Act.

Obama ordered steady withdrawal of the American forces from Iraq, raised vigilance in Afghanistan, entered into the New START ammunition regulation pact with the Russian Government, decreed military intervention in Libya, and oversaw the operation to execute Osama Bin Laden, the Al-Qaeda supremo in Pakistan.

20th President of the US – James Garfield

20th President of the US – James Garfield

39th President of the US – Jimmy Carter

36th President of the US – Lyndon Johnson

10th President of the US – John Tyler

13th President of the US – Millard Fillmoret

37th President of the US – Richard Nixon

6th President of the US – John Quincy...