19th President of the US – Rutherford B.Hayes

Rutherford B.Hayes was the 19th President of the United States of America and belonged to the Republican Party. He was in the Presidential office from 1877 to 1881. He was elected… 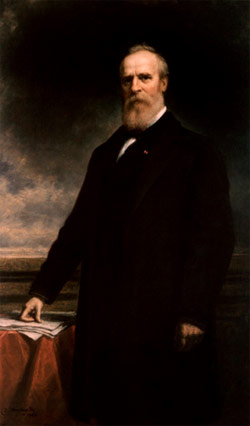 Rutherford B.Hayes was the 19th President of the United States of America and belonged to the Republican Party. He was in the Presidential office from 1877 to 1881. He was elected not by popular votes but by electoral votes. His major opponent was Samuel Tilden.

Rutherford B.Hayes was born on 4th October 1822 in Ohio. His mother was Sophia Birchard and his father, Rutherford Hayes, died three months prior to his birth. He was taken care of by his mother and an uncle named Sardis Birchard. He attained his primary education in the local schools of the area. Primary education was successfully followed by higher education, in which he excelled exceptionally well. He completed his graduation from Kenyon College, located in Gambier, Ohio. He also had a basic knowledge of law and later acquired a graduate degree in law from the Harvard Law School. After passing, he began his own law practice. In 1852, he married Lucy Ware Webb.

Rutherford B Hayes moved to Cincinnati, when the council that was present in the city offered him the post of a solicitor. He prospered as a successful lawyer over the years. He was also an active participant in the Civil War, where he was promoted to the rank of a Major General. Rutherford B Hayes’ political career also began in and around the same time.

While he was still active in the US Army, the Republicans in Cincinnati wanted him in the House of Representatives. Fortunately, he won the elections by an unexpected majority and became a member of the Congress in the year 1865. He was also the Governor of Ohio for three terms, from 1867 to 1876.

His performance as the Governor as well as his illustrious career graph made him an instant favorite with the Republicans and he was selected as a Republican candidate for the Presidential Election in the year 1876. This was one of the most disputed elections in the history of Presidential Elections in the United States of America. An electoral Commission had to be formed to bring a solution to these disputes. the Commission had both Democrats and Republicans in a ratio 7:8. Electoral votes were cast and went in favor of the Republicans by 185 to 184. Rutherford B. Hayes was sworn in as the President of the United States of America in1877.

Hayes served as US President for four years and made several changes and reforms in the administration. Rutherford B. Hayes worked for the rights of the Afro-Americans who lived in the South. He also made it clear that Government appointments of any sort will be made only on the basis of merit and not on any other fields of considerations like color, creed or race. He worked against racism that prevailed in the country and demanded equal rights for every citizen of the United States of America. He believed in a form of government that will include all classes and every individual in the country. He is well known for his economic ideas and reforms. there were number of bills and acts that were signed by him, during his Presidency. This includes the following:

Rutherford B Hayes, American President, had declared on the very onset of his Presidential term that he did not intend to get re-elected. the Ohio State University had him as one of the Board of Trustees after his tenure as a President. It was on 17th January 1893 that this illustrious American President expired after a severe heart attack. He breathed his last in Fremont, Sandusky County in Ohio.

There are certain incidents regarding Rutherford B Hayes, which are very interesting. Some of them are as follows :
A congressional Commission was required to elect the President, Rutherford B Hayes and this has not been repeated in the history of the US Presidential Elections.

Hayes, Rutherford B had several famous quotes that have their relevance till the present day. Some of the most well-known quotes are as follows:

15th President of the US – James Buchanan

29th President of the US – Warren Harding

4th President of the US – James Madison

38th President of the US – Gerald Ford

37th President of the US – Richard Nixon

28th President of the US – Woodrow Wilson

34th President of the US – Dwight Eisenhower

7th President of the US – Andrew Jackson

6th President of the US – John Quincy...

23rd President of the US – Benjamin Harrison