39th President of the US – Jimmy Carter

James Earl “Jimmy” Carter, Jr. or popularly called Jimmy Carter was born on October 1, 1924 was the thirty-ninth President of the United States from 1977 to 1981, and more importantly the Nobel Peace laureate of… 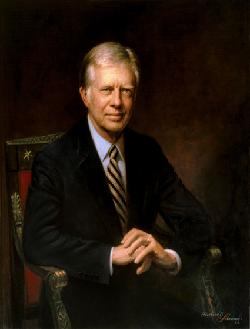 James Earl “Jimmy” Carter, Jr. or popularly called Jimmy Carter was born on October 1, 1924 was the thirty-ninth President of the United States from 1977 to 1981, and more importantly the Nobel Peace laureate of 2002.

Jimmy Carter served twice as the Georgia Senator, before the presidentship and was the 76th Governor of Georgia (1971 to 1975). During Carter’s presidency he created two cabinet-level departments – the Department of Energy and the Department of Education. He also founded a National Energy Policy and removed price controls over indigenous petroleum production. He also worked for less American reliance on foreign oil sources. He shielded the Social Security system by introducing a controlled increase in the payroll tax. In international affairs, Jimmy Carter prosecuted the Camp David Accord.

He also supervised the Panama Canal Treaties and the second round of Strategic Arms Limitation Talks (SALT). He openly supported the basic human rights as a critical element of international policies of the Americans.

The last year of his presidential term was commanded by the Iran hostage shortage. the United States fought to rescue diplomats and American citizens who held hostage in Tehran.

Ted Kennedy loudly challenged Carter for the Democratic Party selection, which Carter won and Kennedy lost. However Carter lost the presidential election in 1980 to his Republican competitor Ronald Reagan.

After retiring from office, Jimmy Carter established the Carter Center to look over global health, democracy and human rights. He has traveled widely to supervise international elections, conduct peace treaties and found relief efforts. He is the earliest living president and the second-oldest living president declared lately in 2007.

15th President of the US – James Buchanan

29th President of the US – Warren Harding

13th President of the US – Millard Fillmoret

4th President of the US – James Madison

2nd President of the US – John Adams

17th President of the US – Andrew Johnson

10th President of the US – John Tyler