US Map > US History > US Independence Day
US History 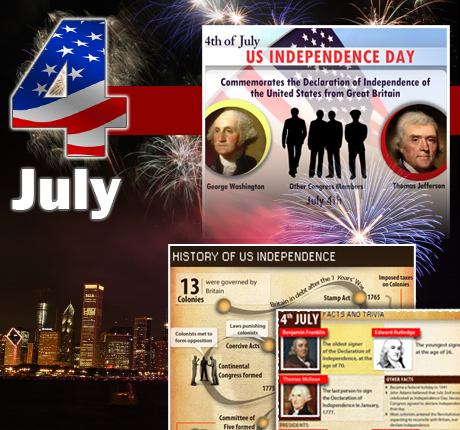 On Wednesday, July 4, 2019, the citizens of the United States will celebrate the 243rd Independence Day. The year 1776, holds immense significance in US History as this year the Continental Congress adopted the Declaration of Independence in a meeting at the Pennsylvania Statehouse in Philadelphia. The American colonies were declared free and independent states by the Congress.

Fourth of July witnesses celebrations across the entire country. It is the perfect occasion to indulge in festivities along with your family and friends. People have a lot of reasons to be excited about as the day is marked by fireworks, barbeques, bonfires, parades, musical events, and other amazing activities.

But of all the events, fireworks are the ones to watch out for. In case you want to have an experience of a lifetime then head out to Brooklyn Bridge where you would be greeted by a spectacular display of Annual Macy’s 4th of July fireworks. Other places where you can watch fireworks are National Mall Independence Day celebrations in Washington D.C., Boston Pops Fireworks Spectacular, Wawa Welcome America! in Philadelphia just to name a few.

Held every year on Independence Day is the Nathan’s Hot Dog Eating Contest where the person who eats the most hot dogs and buns within 10 minutes is declared the winner. The origin of the contest dates back to 1916 when the first one was held at the original Nathan’s Famous at Coney Island. In 2011, men and women competed separately in the contest.

So, make the most of 4th of July by indulging in your favorite activity, celebrating with family and friends, or just relaxing by the beach.

About US Independence Day (4th July)

The Fourth of July in the US is a federal holiday. Some of the prominent leaders of the United States, including George Washington (the first president of the USA), Thomas Jefferson (the principal drafter of the Declaration of Independence) and many other founders of Continental Congress, declared July 4, 1776, as the US Independence Day.

However, there are many people who do not know why the Fourth of July is celebrated.

This is most important day in the history of the United States, as on this day Americans finally decided to declare independence from the British rule. Initially, there were 13 states that had collectively participated in the Declaration of Independence. People in all the 50 states of the country celebrate Independence Day with great enthusiasm.

On the eve of Fourth of July, Americans pay tributes to all those soldiers who died in the war of Independence and to all the great leaders whose efforts resulted in the Americans getting the country free from the British rule.

Pledge of Allegiance
I pledge allegiance to the flag of the United States of America, and to the republic for which it stands, one nation under God, indivisible, with liberty and justice for all.

4th of July Celebrations and Fireworks

Fourth of July is celebrated in various ways around the country. Celebrations comprise parades, barbeques, fireworks, carnivals, fairs, concerts, political speeches and ceremonies all in praise of the freedom and greatness of the country.

The Fourth of July celebrations date back to 1777. The year saw 13 gunshots fired in salute, both in the morning and evening, in the states of Rhode Island and Philadelphia. The next year saw a doubling of the ration of rum for soldiers, as well as an artillery salute. In 1779, Fourth of July fell on a Sunday hence the celebrations were shifted to the next day. It was only in 1938 that the Fourth of July became a paid federal holiday.

There are various acts that have become customary while celebrating the Fourth of July. There is in general an outburst of patriotic fervor among the crowds. Most celebrations are held outdoors. Many public events are held and people generally indulge in picnics barbeques, getaways and family reunions.

The public and private places throughout the country are decorated in red, white and blue colors, which symbolize the American flag. Earlier, the eve of the Fourth of July celebrations were marked by bonfires. An earlier custom of a gun salute with one gun per state (known as the “salute to the Union”) was also an essential feature.
It is also customary to sing songs of American patriotism such as the national anthem, “God Bless America”, “America the Beautiful”, “This Land is Your Land” and “Stars and Stripes forever.”

John Adams on this particular day was reported to have stated that “the day will be most memorable in the history of America. I am apt to believe that it will be celebrated by succeeding generations as the great anniversary festival. It ought to be solemnized with pomp and parade, bonfires and illuminations (fireworks) from one end of this continent to the other, from this time forward forever more.”

It was thus that year onwards that fireworks played an important and indispensable role in the celebrations. Even in the very first celebration of independence, fireworks were part and parcel of the display.
All in all, this holiday is a symbol of freedom celebrated throughout the country. It is also a source of inspiration to people seeking freedom from oppressive rule.

Why is the Fourth of July the national holiday of the United States? It was on the Fourth of July, 1776, that the Second Continental Congress officially adopted the Declaration of Independence. They had actually voted to declare independence from Great Britain two days earlier, on July 2, but did not finalize the document until the 4th. Future President John Adams and others even predicted after the vote that July 2 might become America’s national holiday, but it turned out that the date of the Declaration of Independence’s finalization became far more well-known amongst the public.

When did Americans start celebrating the Fourth of July?
Americans have been celebrating the day since the Declaration of Independence was first signed in 1776. However, it took a long time for it to become the official national holiday of the United States. “Independence Day,” as it began to be called in the early 1790s, was recognized by some states but did not become a federal holiday until the year 1870. Nevertheless, this important anniversary has been recognized by most Americans, whether formally or informally, since the birth of the nation.

How has Independence Day been observed over the years?
Americans traditionally celebrate their Independence Day with picnics, barbecues, nighttime firework displays, and other patriotic acts such as flying the American flag. Many of the earliest celebrations, which still continue to this day, encompass military demonstrations such as the thirteen gun salute in honor of the thirteen original colonies. There are also tons of unique or whimsical celebrations, like the Nathan’s Hot Dog Eating Contest in New York (said to have resulted from a dispute between four immigrants as to who was the most patriotic). The 4th of July has come to be one of the most beloved holidays among the American people, signifying both the potential for summer fun and the pride that comes along with freedom.

France in the American Revolution

Women in the American Revolution