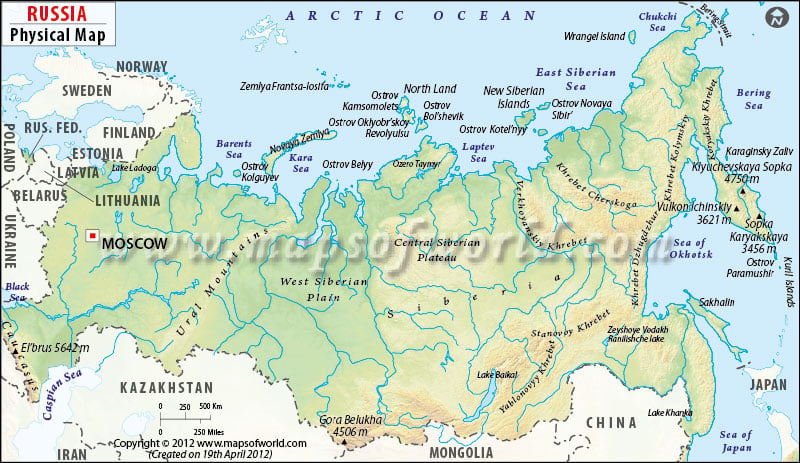 Russia is a transcontinental country spanning Northern Asia and Eastern Europe. The country is the largest globally, having a total area of over 17,125,191 square kilometres (6,612,073 sq mi).

Moscow is the largest city, and capital of Russia marked on the map. A map legend at the bottom helps all the signs, characters, graphics, and symbols used throughout the map. The Russia Physical map can be used for school presentations and other purposes.

Russia lies between latitudes  41. N and 82. N and longitude19. E and 169. E. Russia encompasses one-eight of the Earth’s inhabitable landmass and shares a boundary with sixteen sovereign nations. Geographically the country is divided into five zones: Tundra Zone, Taiga Zone or forest, steppe zone or Plains, arid zone, and the mountain zone. Some of the essential physical features of Russia are:

The East European Plain is an interior plain extending east of the North European Plain consisting of several plateaus. The region includes Central Russian upland,  Volhynian-Podolian Upland and Volga Upland. The Plain is comprised of a series of significant river basins such as the Volga basin, Oka-Don Lowland and Dnepr Basin.

West Siberian Plain is a vast plain in the western portion of Siberia. The plain lies between the Yenisei River in the east, the Ural Mountains in the west, and the Atlas Mountains in the southeast. Significant cities include Tomsk, Omsk, Chelyabinsk and Novosibirsk.

The Urals are the mountain ranges forming the northern part of the border between regions of Europe and Asia. The mountain range runs north to south through western Russia, extending about 2,500 km. The Ural” mountain rises from the Kara Sea to the Kazakh steppe along northwestern Kazakhstan.

Rivers and Lakes system in Russia

The country is home to above 100,000 rivers. Russia has one of the world’s most extensive surface water resources. The lakes contain approximately one-quarter of the world’s liquid freshwater. Three significant rivers longer than 1,000 kilometres that drain Siberia are Irtysh-Ob System(5,380 kilometres), Yensely River (5075 kilometres) and Lena River (4,294). They flow northward into the Arctic Ocean and are among the longest rivers in the world. In western Russia, significant rivers are the Pechora and the Northern Dvina. The two largest lakes of Europe, Onega and Ladoga, are located in northwestern Russia. Lake Baikal is another important lake of Russia among the other lakes in the country.