Saint Petersburg is a Russian city, which was informally known as Piter and formerly known as Petrograd and Leningrad. Founded by Tsar Peter the Great in 1703 as a “window… 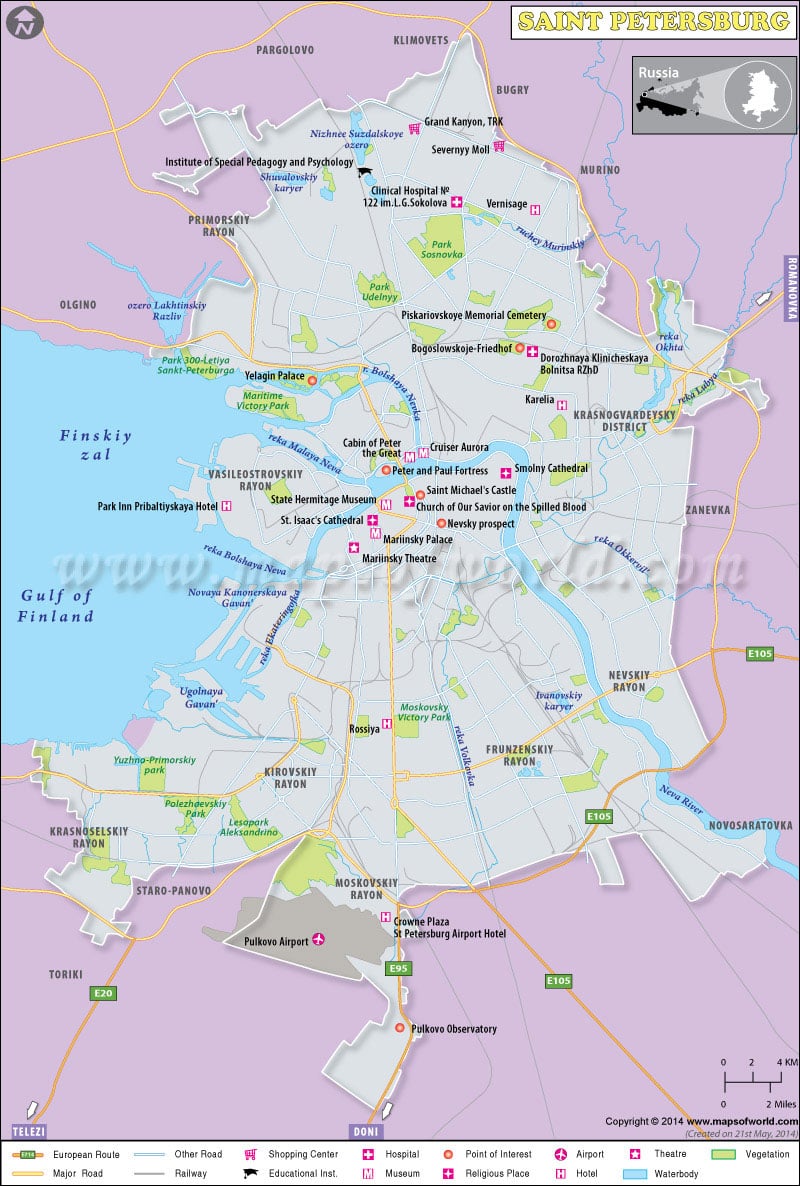 Saint Petersburg is a Russian city, which was informally known as Piter and formerly known as Petrograd and Leningrad. Founded by Tsar Peter the Great in 1703 as a “window to Europe,” the city is the administrative center of Leningrad Oblast and of the Northwestern Federal District. Served as the capital of the Russian Empire for more than two hundred years, it is now the second-largest city in Russia and the third largest in Europe. Saint Petersburg has long been a center of education in Russia. It is also a major European cultural center and the most important Russian port on the Baltic. The city’s administration is composed of the Governor, of the City Government, headed by the Governor and of the other Bodies of Executive Power in the city.

Transportation: Saint Petersburg, a major transport hub is the center of the local road and railway system. It has a seaport and many river ports that provide access to the city. Six major railway stations serve the city from various directions. Three beautiful, old-fashioned trains such as the Sibelius, the Repin and the Tolstoi operate on Helsinki, Finland via Vyborg, Kouvola and Lahti. Pulkovo Airport in the city deals with both domestic as well as international flights. The city also has the tram network for public, which is the world’s largest in terms of track length. The Saint Petersburg Metro system that includes four lines is another mode of transportation.

Hotels: The city serves variety of hotels from luxury type to small budget class hotels. Grand Hotel Europe, located in the heart of the city provides the guests with all up to date amenities. Okhtinskaya Hotel, Okhtinskaya Hotel, Corinthia Nevskij Palace, Grand Hotel Emerald, Grand Hotel Europe, Kempinski Moika 22, Radisson SAS Royal, Ambassador Angleterre, Arbat Nord, Admiralteyskaya, Andersen, Dostoevsky, 5th Corner and Arkadia are the other famous hotels in the city, which serve as hosts to all kinds of tourists from far and wide.

Tourist Attractions: The city draws in tourists from the entire globe with its charm and beauty.

The Neva River gives a unique and class attraction to the city. The water bodies around the city gave it the title ‘Venice of the North’. Tourists often gather here to watch the ‘white nights’ as well as the bridges drawn and lowered for the ship to pass up and down the river. It is also known as the city of palaces as the city holds many palaces like Summer Palace, Summer Garden, Kikin Hall and the Menshikov Palace, Winter Palace, Stroganov palace, the Vorontsov palace, the Anichkov Palace and Beloselsky-Belozersky Palace.

There are several museums in Saint Petersburg including the State Hermitage Museum, Russian Museum, Kunstkamera, Zoological Museum of the Zoological Institute of the Russian Academy of Sciences, and the Central Naval Museum.

The city also has number of churches which are attracted by pilgrims. St Isaac’s Cathedral is the largest church in the city and one of the biggest domed buildings in the world.

Transport and Communication of Russia