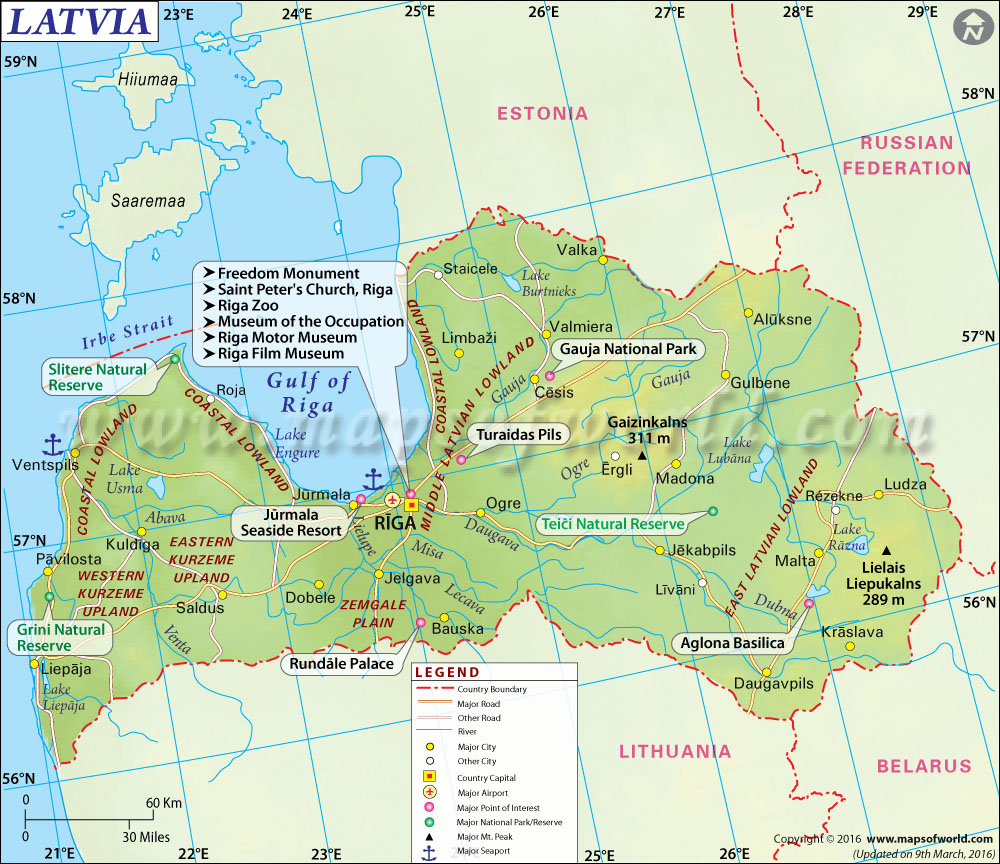 The early Baltic people arrived on the shores of what is now Latvia between 3000 BC and 2000 BC. These people organized into several tribes, including the Curionians, Latgalians, Selonians, Semigallians, and Livonians which had all emerged by around 900 AD.

With Latvia’s strategic location along the Daugava River, the land became a major crossroads along a major trade route, bringing the people in frequent contact with many other cultures, including the Vikings and Nordic people and the Germans, who would travel to Russia and the Middle East for trade.

Crusaders from Germany arrived in Latvia, attempting to convert the people and bringing the land under Germanic rule as Livonia (or Terra Mariana) in the 13th century. When Livonia was dissolved in the late 1500s, its territory was ruled by the Polish-Lithuanian Commonwealth. When Poland went to war with Sweden, the northern territory of Livonia became Swedish Livonia, part of the Swedish Empire.

Latvia became part of the Russian Empire in 1795, and suffered from wars and the plague during this time. The 19th century was a period of economic growth in the region, ending with World War I. Latvia declared independence in 1918, but fought for it in the war that followed, eventually adopting its constitution in 1922. During World War II, Latvia was occupied by the Soviet troops and invaded by Germany. The Soviets occupied Latvia for several long periods after the war, until they restored independence as the Republic of Latvia in 1991.

Latvia has land borders with Estonia, Lithuania, Russia, and Belarus, and shares a maritime border with Sweden across the sea.

Latvia is a Baltic state, with coastline along the Baltic Sea on its northwestern edge. The terrain of Latvia is fairly flat with some hilly areas and uplands. Much of the land is forested with pine and spruce trees, which are important to the country’s exports and economy. The coastal regions of Latvia are sandy and surrounded by coastal plains.

The longest river in Latvia is the Daugava, which flows for 352 kilometers (219 miles) across the country after traversing Russia and Belarus. Other rivers are the Lielupe, the Gauia, the Venta, and the Salaca. The Gulf of Rig is another major water feature of Latvia, located along the northern edge of the country with its capital at the base of the gulf.

Latvia is home to many historic sites and scenic vistas. Its capital, Riga, features ornate architecture in its Old Town, constructed between 1860 and 1914. The town square is an important place in Latvia’s history, with its medieval fortification, museums, and churches. Riga features a castle, markets, and parks, the Freedom Monument to commemorate the country’s independence, and the House of Blackheads, which was the headquarters of the merchant guild. Sigulda is a popular vacation destination, and is known for its many castles and palaces, and archaeological ruins.

Gauja National Park is a popular tourist destination for outdoor recreation like fishing, hiking, climbing and canoeing. For beaches, Jurmala is a popular town with white sand beaches, small waves, and vacation resorts.

Riga International Airport is the main airport of the country, and the busiest of any Baltic airport. Railway service to Latvia is available from Russia and Lithuania, though many of these are overnight rides. Within Latvia, there are great options for trains between cities including Sigulda, Jurmala, Daugavpils, and more, which are reliable and cheap. The road network in Latvia is fairly extensive, so travel by car and bus are also good options.

Latvia has several major ports, including ports in Riga, Ventspils, and Liepaja. There are ferries that travel between Riga and Stockholm, Sweden, and Lubeck, Germany. Another transportation option is a river boat cruise down one of Latvia’s rivers.