Poland Map Europe illustrates the surrounding countries with international boundaries, 16 provinces' boundaries with their capitals, and the national capital. 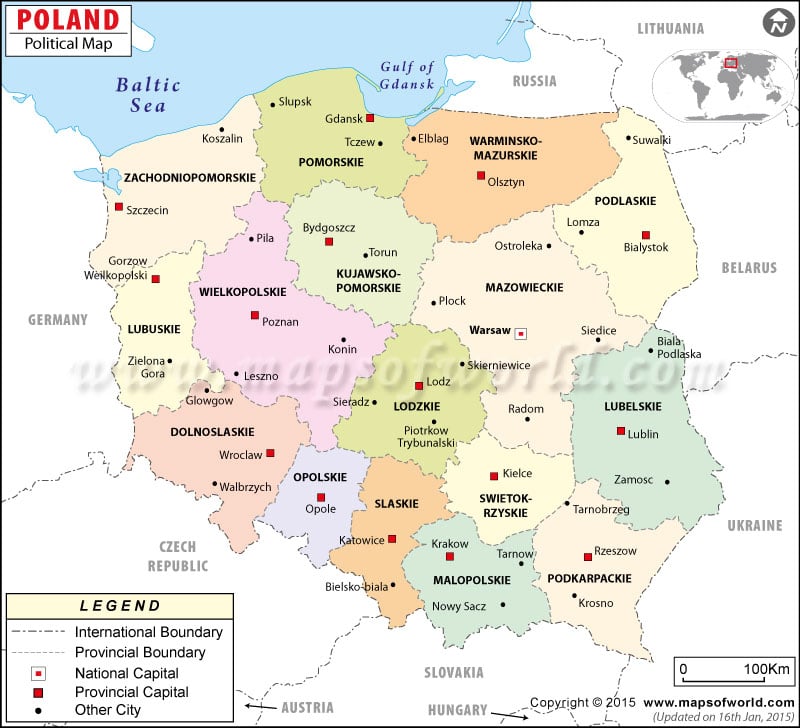 Poland’s Political Map locates the cities, provinces, and provincial capitals of Poland. Poland is land-bordered by Russia, Lithuania, Belarus, Ukraine, Slovakia, the Czech Republic, and Germany. In the north, the country is bordered by the Baltic sea and the Gulf of Gdansk (in the Gdansk -Poland region). Warsaw, Lodz, Radom, Slupsk, Elblag and Bielsko Biala are the major cities.

Located in Central Europe and sharing the border with seven countries, Poland lies along the geographical coordinates of 52º North latitude and 20º East longitude. This country covers an area of about 312,685 sq km, of which the land covers 304,465 sq km and the water bodies cover 8,220 sq km. The Baltic Sea and the Gulf of Gdansk are located in the north.

As shown on the Poland Political Map, Poland is bordered by Russia and Lithuania in the north, Belarus in the east, Ukraine in the southeast, Slovakia in the south, the Czech Republic in the southwest, and Germany in the west.

Warsaw -Poland: The capital city Warsaw is the capital city of Poland and is situated on the geographical coordinates of 52º 15′ North latitude and 21º East longitude. A red box can easily identify Warsaw’s location on the Poland Physical Map. Some of its nearby places are Powisle, Muranow, Zoliborz, Srodmiescie and Targowek.

Some of the cities of Poland that are shown on the Poland Map by black dots are Slupsk, Lomza, Plock, Leszno, Legnica, Radom, Chelm, Bielsko Biala, Krosno, Nowy Sacz and Elblag.