Warsaw Map (Capital of Poland) It is situated on the Vistula River, and knows as the 9th most populous city in the European Union. 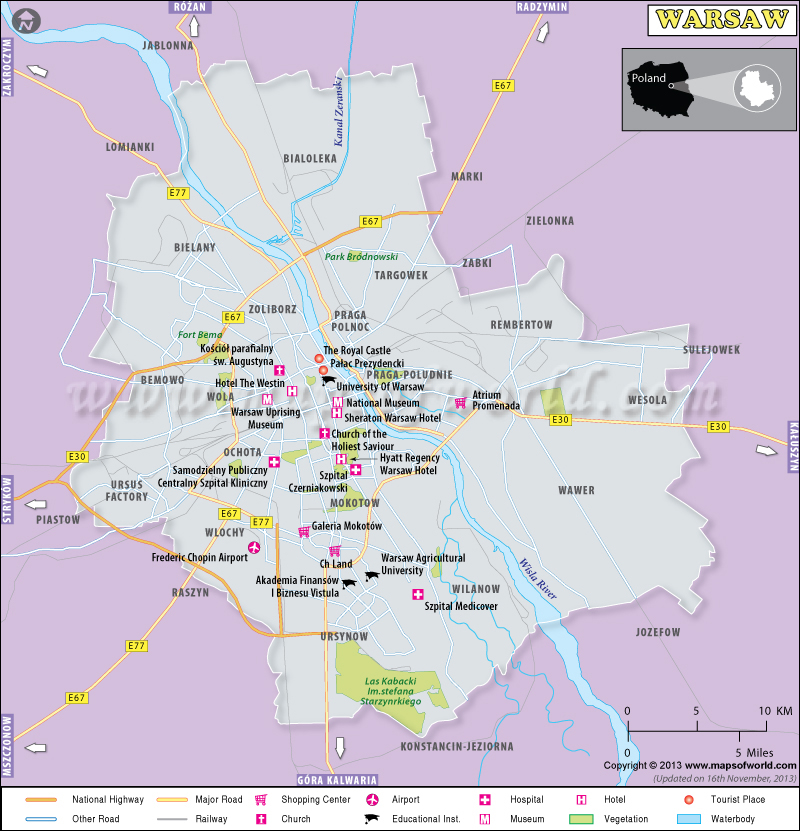 Warsaw also referred to as Warszawa in Polish, is the largest city in Poland. The city holds an approximate population of 1.7 million people, which makes it the ninth most populous city in the European Union. Warsaw is sprawled over an approximate area of 516.9 sq. km. Warsaw is considered to be the cultural, political, and economic center of Poland. This bustling metropolis is noted for its glorious history.

Located in east-central Poland, the city lies at a distance of 300 km from the Carpathian Mountains and 260 km from the Baltic Sea. Situated in the main hub of the Masovian Plain, the city has an average elevation of 330 feet above sea level. The city is located on two chief geo-morphologic formations: The Vistula Valley and the plain Moraine plateau.

You can reach Warsaw by flight, train, or bus.

The city enjoys a continental climate where summers are crisp and warm, autumns sunny, and winter chill. Summers may range from mild to extremely hot. The city experiences minimum rainfall all through the year, and July turns out to be the wettest month ever. The weather in winter differs, however – it may get cold and snowy. The climate is the coldest from December to March.

The best time to visit Warsaw is from May to September as the climate is most favorable during this point time.

The city of Warsaw is noted for its cultural embrace. The entertainment agenda of the city is packed with innumerable events that define the cultural glory of the city. Some of the fairs and festivals of this city are:

Warsaw offers accommodation for people with varied budgets – from lavish apartments to youth hostels. For a lavish stay, you can choose from the 5-star hotels – the InterContinental Hotel Warsaw, H15 Boutique Apartments, Mamaison Hotel Le Regina Warsaw, Hyatt Regency Warsaw, and Sofitel Victoria Warsaw. On the other hand, if you have an eye on something cheaper, then stay options like the Start Hotel Aramis, Première Classe Varsovie / Warszawa, Campanile – Warszawa Varsovie, and Chmielna Guest House are available.