The legendary Polish city of Krakow or Cracow takes the minds of the travelers on an eternal journey to the past, to the enriched historical days. As the capital of the Polish… 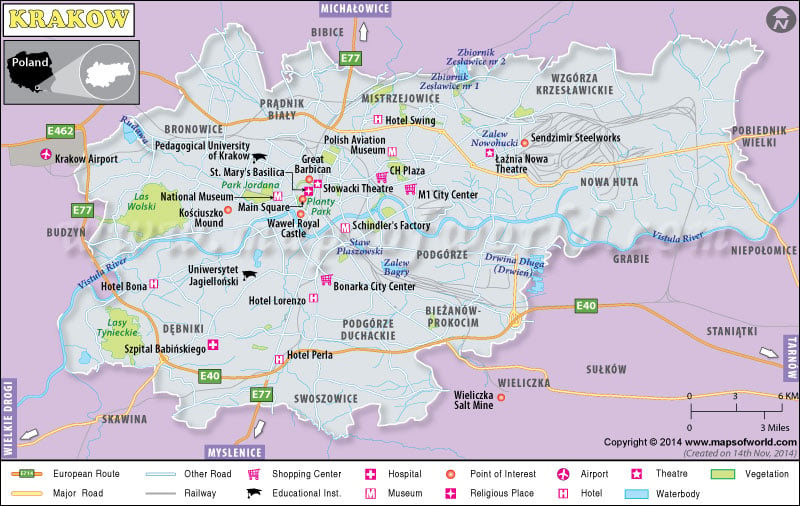 The legendary Polish city of Krakow or Cracow takes the minds of the travelers on an eternal journey to the past, to the enriched historical days. As the capital of the Polish nation for centuries, Krakow forms the main center of attraction for historians, scholars and simple tourists due to its exclusive collection of royal architectures.

Located on the southern regions of Poland, Krakow overlooks the beautiful banks of River Vistula at the foothills of the Carpathian Plateau. Being a picturesque vale, the city has an elevation of 219 meters above sea level. About 300 km to the north of Krakow, lies the Polish capital Warsaw and Tatra Mountains surround the city about 100 km towards the south. Covering a land area of 327 sq. km, Krakow comprises only 1/10th part of the total mainland of Poland.

Temperate climatic conditions prevail in Krakow throughout the year. Fluctuations in daily weather are a frequent feature, owing to the collision between the arid continental air and the humid breezes blowing from the Atlantic. 6° to 10° C is the average annual variation in temperature. The Western winds bring in sufficient rainfalls and winters are under the control of the Eastern winds which reduces precipitation to considerable extents.

Though smaller in size, yet the economical activities of Krakow in Poland makes it the 4th largest industrial area of the nation, with tobacco, pharmaceutical and metallurgical sectors booming on the mainland areas, along with numerous privatized companies. The presence of as many as seven centralized banks handling the foreign currencies and the incomes from these industries speak a lot about the economic affluence of the region.

Krakow cultural activities are closely related with travel and tourism on the land. The city is known to organize numerous art exhibitions and painting shows, which are popular among a handful of travelers visiting the city. Presence of museums, architectures, theaters, films, libraries and music centers reflect the diverse achievements of the inhabitants, since time immemorial. Together with a handful of ancient buildings in the city like the Royal Castle on Wawel Hill, Aqua Park and St Mary’s Church, the popularity of Krakow will never diminish in the eyes of tourists who are nature lovers and a bit traditional in mentality.