China is located in East Asia, bordered by the Pacific Ocean on its east coast and by 14 countries, including Russia, Mongolia, and India. 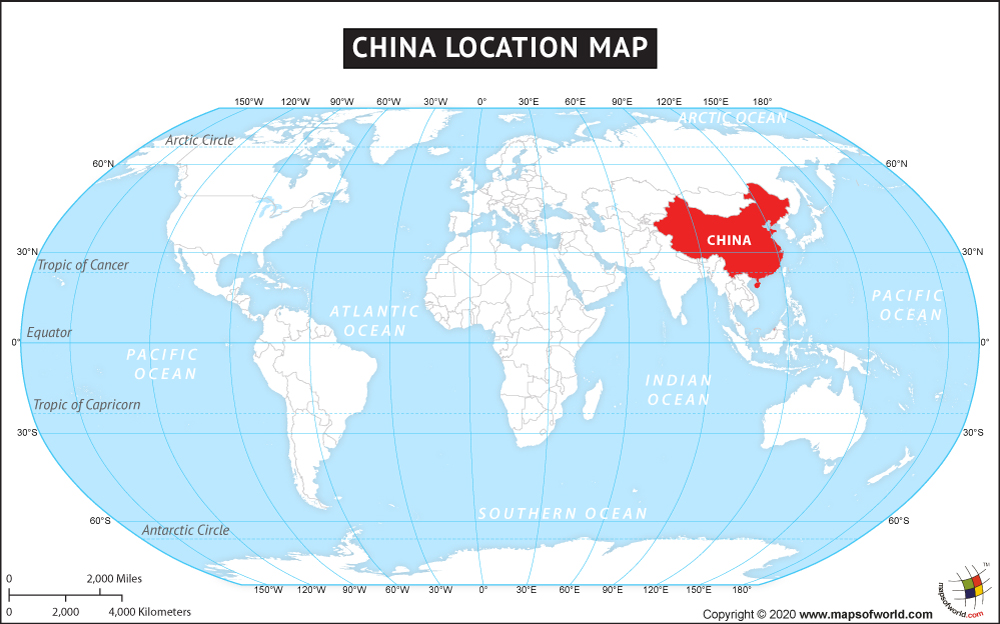 Description: Map showing the location of china on the World map.
2
FacebookTwitterEmail

China is situated between latitudes 18° and 54° North and longitudes 73° and 135° East, which is in Eastern Asia. Fourteen countries share boundaries with China. The total land boundaries of China measures 22,117 kilometers (13,743 miles) long.
With a population of over 1.3 billion residents, the People’s Republic of China is the most densely populated nation in the world. China consists of twenty-two provinces, One claimed province, four municipalities, five autonomous regions, and two specially administered regions. The capital of China is Beijing.

The total area of China is 9,640,821 square kilometers (3,704,427 square miles). In terms of land area, the People’s Republic of China is the second largest country in the world and in terms of total area, the fourth largest country in the world. China’s shoreline extends approximately 14,500 kilometers (9,000 miles), the eleventh longest shoreline in the world. China is bordered by the South China Sea to the southeast and by the East China Sea towards the east, separating China from Korea, Taiwan, and Japan.

The 14 nations bordering China are as follows:

The neighboring countries of China are: