How did the Alibaba Group and its Global Retail Empire emerge? - Answers 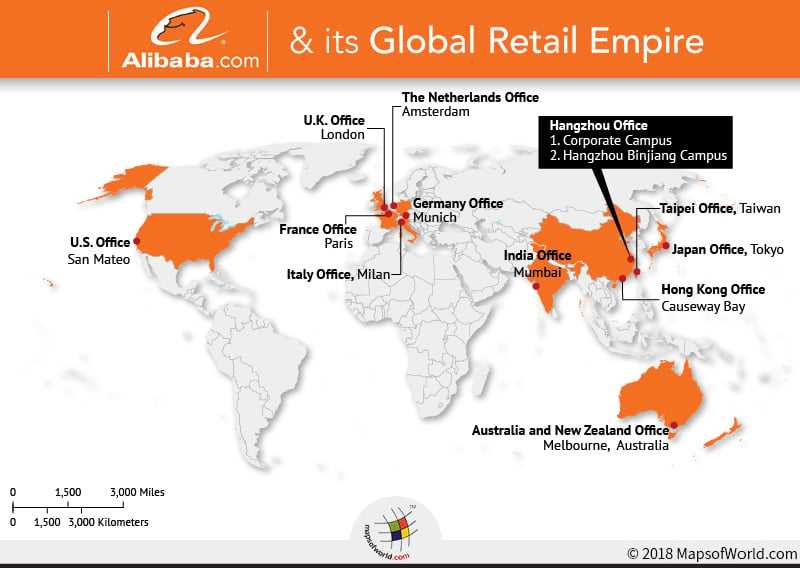 Inspired from the Arabic story of  ‘One Thousand and One Nights,’ the founder of the company, ‘Jack Ma,’ named it ‘Alibaba.’ Largely associated with the mythical legend of  ‘Alibaba and Forty Thieves, ‘the company was founded by a former English teacher in Hangzhou, in eastern China.

As one of the richest men of China, and the Executive Chairman of Alibaba group, Jack Ma aims at building a global retail empire and dominant force in the Chinese e-commerce. This dream is supported by the company’s current market value of $264 billion and approximately 450 million customers.

As revealed by the Synergy Research Group, the Alibaba cloud, also called  ‘Aliyun,’ had for the first time been ranked in the top five cloud infrastructure services, others including Amazon Web Services, Microsoft, IBM and Google.

The blossoming of the company into a valuable and diverse corporation of the world started in 1999, by the incumbent Executive Chairman ‘Jack Ma’ and 18 other people. It was launched to help small-scale Chinese exporters, manufacturers and entrepreneurs, to sell internationally.

The company firmly believes in the ‘extensive use of internet,’ for creating a level playing field for the small enterprises, in the domestic and global economies.

The launch of the company’s online retail platforms was fortunately timed, following the boom of ‘consumer internet,’ in China. These were  Alibaba.com  (Business to Business) and  1688.com (Business to Consumer). This was met with cash-raising from banks and further establishment of  Taobao.com  (Customer to Customer). This was coordinated with the launch of instant messaging tool  Aliwangwang  and  Alipay  (third-party online payments). These three together lay the foundation for the current Alibaba Group of e-commerce, logistics and finance.

The 10th  anniversary of the company was celebrated in 2009, by establishing the Alibaba cloud and acquiring leading Chinese IP provider. The success was prolonged by forming  Juhuasuan  (a group buying marketplace),  Aliexpress  (a global marketplace for Chinese exporters) and  DianDianChong  (social networking mobile app).

In the 2000s, the company made its mark on the global economy by being one of the most prolific investors in the world. It also grabbed global headlines for the biggest IPO (initial public offering), making it one of the leading valuable company in the Standard and Poor Index. Showing what a contending force China is, Alibaba has been at the forefront of the Artificial Intelligence Revolution – using machine learning to fuel sales, marketing and customer service.

While making profits, the company also believes in social causes and responsibility, as well as solving environmental and humanitarian purposes. It announced that it would contribute 0.3% of its annual revenue to environmental awareness and conservation efforts around the world. It has also set up the  Alibaba Foundation  to tackle social issues.